What have I been up to lately?  Well I can’t recall if I had mentioned this but over the last few months I’ve begun a ‘movie night’ with my Dad.  Each Tuesday we watch a movie and have some popcorn.  It’s nice and also an excuse to get some movie watching in.  It’s not always a new movie though so sometimes I don’t have a review to post afterwards.  Last Tuesday was such a case, as we watched the horror ‘Oculus’ which I previously reviewed.  Again I enjoyed it and my Dad got a lot out of it too.  So in coming weeks you may get to see more reviews, but if there is a lull, it’s probably down to us watching something I’ve already reviewed (I have ‘John Wick’ lined up for Tuesday).

In other news I have been playing a great deal of Metal Gear Solid 5: The Phantom Pain.  It’s my first proper stab at a Metal Gear game since Metal Gear Solid 2, and even though I purchased Metal Gear Solid 3, I didn’t play it all that much, and I skipped Metal Gear Solid 4.  What do I think of this latest entry?  Like many games these days, it’s open world and huge, with side quests (ops) and a large storyline that I am only really touching the surface of.  Graphically it’s pretty lush.  The wildlands of Afghanistan are immensely detailed and atmospheric and look fantastic, especially with sand storms, day to night cycle and great textures, lighting and effects – even if the water is a bit last-gen.  I like the concept of mother base too, your hub location where you can build up your army (from kidnapping enemy soldiers) and adding to the facilities for developing better equipment for use in the field.  It’s very absorbing stuff.  It also plays really well.  Metal Gear pretty much invented the stealth genre and the ideas here work superbly, with the Fulton delivery system (the ability to attach a balloon to a knocked out enemy, animal or piece of equipment, and immediately send it back to mother base) proving a great deal of fun.  That’s not to say it’s easy as the game takes no prisoners if you get discovered, and the intelligent enemies will hunt you down and nine times out of ten, end your game swiftly.  I’m having a great time with it, but like I said – it’s still early days.

I also got my hands on Gears of War: Ultimate Editon, which looks great…it was always a very well made shooter and had some good characters and a great concept.  The gameplay hasn’t aged badly at all and you can see how the game has influenced a ton of games since it came out, especially with the rock-solid cover-mechanic and the satisfying gunplay.  Graphically it’s quite a step-up from the original, and the textures, lighting and everything looks really good.  I’d say some of the design; of the characters and levels has moved on a bit, but it’s still worth revisiting.

Other than this, I’m still in run up mode to November, where two things are happening…firstly on November 9th I finally get to see in concert my favourite band of all-time ‘Garbage’ of which it’s a special 20th anniversary tour to celebrate the anniversary of their debut album, and loads of things are happening online at the moment, such as regular updates on the band’s Twitter, Facebook, Periscope and Instagram accounts, as well as a re-release of the album in special packaging, on CD, Vinyl and digital complete with remixes, b-sides and specially re-mastered versions of the individual tracks.  I obviously have stuff pre-ordered, and am looking forward to it a great deal.  Next up is my 40th birthday on the 14th.  Now I’m not big on fuss or attention, it can make me uncomfortable…but hey I’m hitting the big 4-0 so may as well make the most of it.  Not sure what that’s going to be right now, but as I’ll be in London leading up to it, that’s a good a start as any.

On TV I’ve been finishing up season 3 of Orange Is The New Black which has once again been great.  I’m also watching Game of Thrones (currently working my way through season 3) and Australian prison drama Wentworth, which I highly recommend. 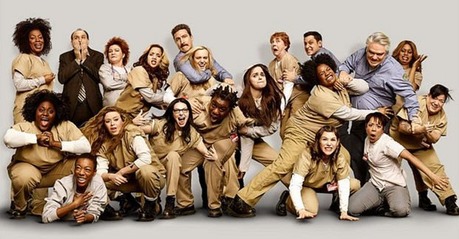 I’m sitting here also at the start of a week off from work.  Damn work has felt gruelling of late.  I’ve also got my head in a slightly better place than it’s seemed to have been in a while.  Depression, thoughts of things that have happened to me in the past etc. can linger and it’s easy to wallow in it, but it never does me any good or solves anything … so even though moving completely on seems like the hardest thing to do some days, I’m trying my hardest.  I really am.  Having good work colleagues and a job I enjoy and a good family around me helps a great deal and makes me wake up to myself.

So here’s to relaxing, watching movies, playing games and a few days out.  I’m looking forward to it!