I recall being rather underwhelmed by the popular but fairly lightweight original, and thought it’s lengthy build up to the horror and the reveal of the killer was too drawn out.  In it’s final moments it began to come to life and had at least one stand out, nasty scene (head on a stick!).  So imagine my surprise on reading several favourable reviews of this sequel. 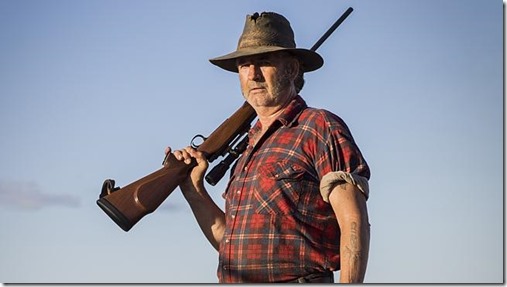 Outback serial killer Mick Taylor, a bushman if ever there was a bushman in the wilderness of Australia, spends much of his time picking off tourists and back-packers who come to visit the eerie location of a huge crater, supposedly made by a meteorite.  With a fine line in Ozzy lingo and Australian history, he especially enjoys killing foreigners or anyone not well versed in the land of Oz.

Shot well and with a keen eye for gore and violence, this feels like it’s on the right track, and is a lot more action-packed, with this time Mick being centre stage.  Now unlike the original, the mystery and atmosphere is missing in place of some stand out kills (the cops…).  Also unlike last time around there’s no real time to get invested in the innocent victims before Mick is despatching them.  Now Mick himself, played larger-than-life by John Jarratt is an interesting creation, but because the movie is all focused on him, his clichéd bushman swagger and often comical lines turns many of his scenes into farce (a truck chase to the tune of The Lion Sleeps Tonight … really?), and loses much of his potential menace – like what they did to Freddy Krueger in the Elm Street sequels.  Oh and would it have hurt to get a bit more backstory on him?  Or any for that matter.

For the ample gore and plenty of energy, this was still fun, but for a horror it relied too much on one liners and in-jokes than actually scaring it’s audience – a big fail in my book.  Hopefully they won’t bother with Wolf Creek 3.