I’ll certainly go on record as saying the first Conjuring movie is one of the best horrors of recent years, and it’s follow up wasn’t too shabby either.  Set in the same universe, the Annabelle movie so far has passed me by, Luke warm reviews and generally ‘meh’ word of mouth not helping matters.  However I had heard this follow up was meant to be superior, so I thought I’d give it a chance. 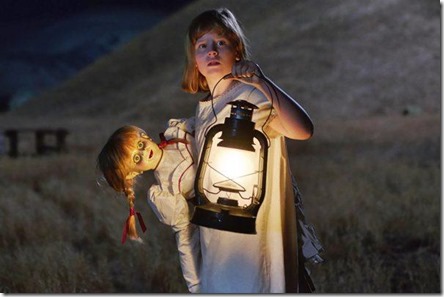 Set some time before the events of the original movie, this has a group of orphans coming to live at a house in the middle of nowhere (of course).  The ageing couple that run the house however hide their own tragic history following the death of their daughter twelve years previous.  However it’s not long that things start to go bump in the night, mystery surrounds the reclusive wife and there’s a closed off room that certain girls should not go poking their noses into.

A solid premise, a creepy location and inquisitive young girls in night gowns wondering around creepy corridors in the dark.  Yes it’s rather familiar stuff and pulls out many a horror movie trope.  However it’s also a movie that wears its clichés like a badge of honour, delivering effective scares and plenty of freaky imagery and nail biting atmosphere that I found genuinely unnerving.  The mostly young cast do a fine job especially lead girl Talitha Bateman and with several nods to both The Conjuring movies this was the whole package.  It gets pretty messed up and nasty towards the end and I left the cinema fairly shaken but thoroughly entertained.  A small tie in with the last movie ends things on somewhat of a ‘ok..er, what?’ and for a movie labelled ‘creation’ it’s still a bit of a mystery just what Annabelle’s origins are  – but otherwise I still got a kick out of this.