Now before you think this is going to be some sort of character assassination post … I personally am a fan of this talented young actress.  I thought she stole the show in the movie Kick-Ass, a role that deservedly launched her to stardom.  Yet the next thing I saw her in was a remake of the excellent Swedish vampire flick ‘Let The Right One In’.

Now the problem I have with such role choices she seems to be making (or her agent is) is that following a relatively daring turn in Kick-Ass the logical next step is to turn to horror roles?  Erm, why?  In the original movie they chose a pale, gothic looking actress in the form of Lina Leandersson (right) and it was perfect.  Why was Moretz wrong for the remake?  She’s too cute and pretty to believably come off as a vampire that’s hundreds of years old!  No I say!  That and many other mistakes the questionable retitled ‘Let Me In’ made.  Yet for some reason her agent (or herself) repeated this casting error with the recent remake of ‘Carrie’. 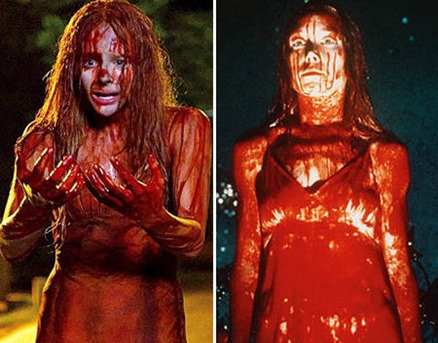 I haven’t actually seen this movie although I plan to, but again she’s replacing an actress (Sissy Spacek – right) who was cast for her plain, wall-flower look, and again Moretz is too pretty for the role!  This is meant to be a bullied, picked on character … and I imagine Moretz would be fairly popular in school!   I may be wrong about this but it made me immediately doubt the credibility of the performance and the subsequent reviews seem to support my theory.

Now look at her in a movie like Hugo, perfect … quirky, cute and likable – even returning to Kick-Ass 2 will undoubtedly work I’d imagine (another one of my to-watch movies).  So I sincerely hope that in the future Chloe Grace Moretz starts going after roles that suit her look and style, not dark horror roles better suited to dark, gothic actresses … perhaps its cool she has such diverse career opportunities, and she has the talent, is funny, charming and deserves to do well … just perhaps leave the remakes alone unless you’re really right for the character, huh?

7 thoughts on “Everything right and wrong about Chloe Grace Moretz”