Well, it rolls around once again. This year seems to have flown. Today I again got some lovely gifts as pictured below… ranging from the 4K editions of No Time to Die and the Indiana Jones Collection. I also received the newly released special edition of Jackie Chan’s Armour of God. I also got a book exploring the visual style of the movies of director Wes Anderson, of who I have become quite a fan of. Oh, and of course I’ve had the official Scarlett Johansson calendar again. Add to this some clothing, smellies and vouchers etc.

So Merry Christmas and Happy New Year to all visitors of this blog. I hope you are having a nice time too regardless of if you celebrate this holiday or not. Ho Ho Ho!

Well it’s finally here. Hope all that have visited my blog over last twelve months enjoy the holiday and have fun! I’m very pleased with the prezzies I got and those that I got for seemed very happy with what I got them!

Well it’s that time of year again and its hard to believe how fast this last twelve months has been and gone.  I’m a little late doing part two of my 2017 look back but hope to have that up later today or tomorrow, leading as usual to my end of year Top Ten at the end of the month. 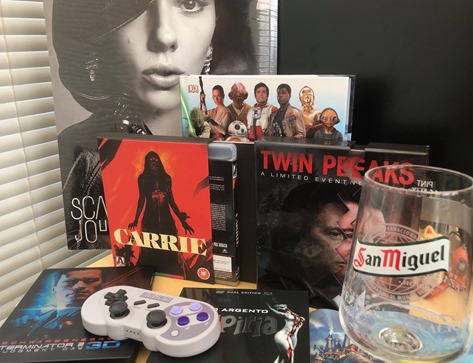 For now how was my Christmas morning?  I send out my thanks and best wishes to anyone who got my a prezzie, and I hope you like what I got you!  This year was a bit of a Blu-ray haul, with the newly restored re-master of Terminator 2 in steel book form, the 4K re-master of Italian horror classic Suspiria, the newly restored, special edition of Stephen King classic Carrie and the box set of the new Twin Peaks.  In addition I got the official Scarlett Johansson calendar,  cloths as well as a book of Star Wars characters which I’m sure I’ll find fascinating, and the retro-themed SN30 Pro Nintendo Switch control pad from 8BitDo.  I’m really pleased with all I got and will be perusing it all over the next few days as well as I’m sure, eating, drinking and being merry – if it wasn’t for the fact I’m back at work Wednesday … booo!  Hisss!!

I will also send out a Merry Christmas and a Happy New Year to all my followers, visitors and those that like or comment or simply drop by.  Each and every one of you are so appreciated and help me to keep on writing this blog and keeping my passion alive.  To a great 2018 whatever you’re doing!

It’s that time of year again and how fast it seems to have come around.  Doesn’t feel like twelve months.  I’m having a really nice day and have been spoilt rotten so thank you so much to those that have got me anything and I really hope you like what I got you!

This year I have had a couple of box set, namely the Blu-ray set of the cult TV series (due back in 2017…) Twin Peaks which comprises of the full, re-mastered versions of the two seasons of the show as well as the movie, Fire, Walk With Me.  Another box set I got is it has to be said, well overdue and a series of movies I intend to fully review on this blog…yes, its Harry Potter!!  I confess I have never watched a Harry Potter movie but I am actually really looking forward to delving into this much acclaimed and popular world.  In addition to the box sets, I have also had a very nice book, namely ‘The Secret History of Twin Peaks’ by series co-creator Mark Frost and am excited to read through that as a great companion-piece to my Twin Peaks collection.  I also received the much anticipated (and long awaited) The Last Guardian for PS4.  In the picture below you’ll also find an R2D2 mug, and well, I love novelty mugs so that was a nice surprise.  Oh yes, and a Jennifer Lawrence calendar – don’t judge me!  ha ha.  As well as the above, I also got the usual smellies, clothing etc and have to say I’m really humbled by what I’ve received this year. 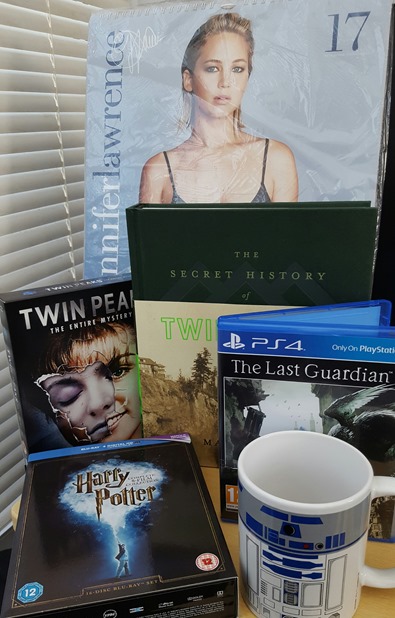 I’ll take this opportunity to also thank you, my readers / visitors to this blog.  All year round I write it as a hobby, a continued interest and next year will mark 10 years that I’ve been running Craig’s Movie Report.  I’m not particularly popular or put that much content on here, but I love running this blog and love any feedback or interest I get.  So thank you all.

Merry Christmas and here’s to a wonderful Happy New Year!

Well that day many of us look forward to all year has finally arrived.  I always approach Christmas with mixed feelings.  It’s mostly for kids anyway, but despite not really enjoying the long-winded hype that leads up to it, I always feel nice and festive on the day itself.  Pictured below are what I received today from my parents and brother and I’m very happy.  I went for box-sets (The Sopranos complete collection Blu-ray, James Bond complete collection Blu-ray) mainly and a special edition steel-book of Mission: Impossible Rogue Nation.  Other than those shown below I also got some smellies, a Star Wars The Force Awakens T-shirt and vouchers.

So wishing everyone who reads this blog, long time visitors, followers and even those who just stumbled upon this post in a feed a very happy Christmas … so have a great time everyone with whatever you celebrate at this time of year.  Be safe, be happy, be kind.

I hope to be writing a few posts over next few days to detail my thoughts on the year leading up to my annual top ten.  So watch this space folks!