One of the most hyped games for this year has to be Tom Clancy’s The Division, an open-world MMORPG set in a locked down New York after a pandemic outbreak.  I got access to the beta of the game over the weekend after pre-ordering, and I must admit it’s very good indeed.  I haven’t actually managed to partake in some of the much talked about co-op gameplay or the PVP dark zone sections, but just exploring the disaster-stricken New York streets, taking on scavenger gangs and completing side missions as well as the beta’s main mission … has been a lot of fun.

screenshot captured directly from my PS4

Visually the game has had a bit of a downgrade since the initial E3 reveal but that was to be expected considering the game was first shown before the Xbox One and PS4 were even released.  But with that in mind, how do the visuals stack up in this near-finished version?  Very good indeed actually.  There are a ton of effects at work, impressive weather such as wind & snow considering the game is set at Christmas, and a wealth of detail on buildings, the road, and cars (yes you can still close that car door, folks!).  The lighting is very atmospheric and with what appears to be a dynamic weather and day / night cycle the game shows off it’s true beauty the more you play it. 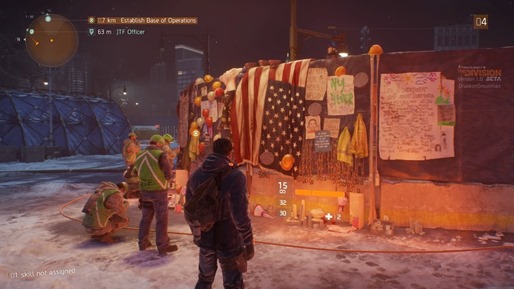 screenshot captured directly from my PS4

Gameplay-wise (with similarities to Destiny) you create your character (well, their face and gender but I didn’t do much with this aspect when first booting up the game), and then are introduced to the world, following the storyline of an agent flown into the crisis and having to make his (or her) way to the base of operation – a hub environment that you enhance and develop as you go on missions and complete tasks.  It’s a good idea and one that will mean there’s more than just a develop character / stats excuse to keep on playing.  I wonder if this is the only base of operation or if there will be others in different areas the player can develop?  The core shooting feels good too, with an excellent cover-based mechanic that enables the player to run to various areas of cover very easily, making for some exciting encounters.  The character / NPC designs are very detailed and slickly animated making this game feel very next-gen overall.  I think it will be a game that could become quite addictive also as more missions become available and various quests are discovered.  The enemy characters at this stage seem quite samey (all violent hoodies it seems) but that could change once the game is out and we could get boss fights.  It’s too early to be sure though.

For now The Division is looking to be a solid game to invest a ton of time in so I can’t wait till March 8th!

I never saw the previous, highly regarded Jack Ryan movies; the Alec Baldwin starring The Hunt For Red October, the Harrison Ford vehicles Clear & Present Danger etc.  Something about their overly serious approach to CIA espionage action always had me leaning more towards Mission Impossible or the James Bond franchise for my escapism.  Now in the wake of his credible turns in the recent Star Trek reboots, pretty-boy actor Chris Pine steps into the shoes of a more rookie Ryan, in this origin tale to Tom Clancy’s famed character. 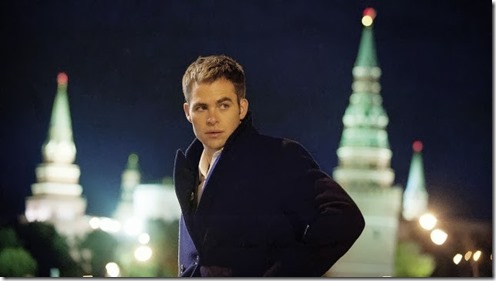 I’ll admit the casting of the likeable Pine drew my attention and well, I can be a sucker for a good action thriller.  Here we also get Kenneth Branagh, another actor I have admired, albiet in a typical English-thesp cast as the bad guy turn, as a Russian terrorist attempting to over throw the U.S. economy.  I was hoping Hollywood had grown out of such casting by now.  He is also the director so maybe he only has himself to blame for that.  Pine however has Keira Knightley as his girlfriend who gets caught up in proceedings when she follows him to Russia fearing his secretive goings-on are hiding an affair.  This is fairly formulaic stuff, and isn’t helped by a chemistry-free pairing of Pine & Knightley, whose relationship is given no weight due to the fact their casual hook-up during a prologue hospitalization is glossed over.  Costner also offers little more than his presence and a mentor vibe (which seems to be his thing these days, see: Man of Steel).  Thankfully Branagh’s villain is fairly decent and charismatic.  The biggest problem though is that we’re presented yet again with a thriller more interested in fancy rapid-fire editing, it’s pounding score and a great deal of espionage mumbo-jumbo than conveying a plot that is easy to follow or characters and situations we can care about.  Doesn’t help either that what action there is, is fairly limply handled and over before you can get into any of it.

For Chris Pine fans, its worth seeing, and I expect we’ll see a more polished sequel down the line.  Yet I’ll hazard a guess for Ryan enthusiasts … you’re probably better off with the books.  Everyone else, this is simply a glossy but otherwise by-the-numbers thriller – and not a particularly surprising one at that.