Probably the most anticipated game of the year.  CD Project Red’s long awaited follow up to the award winning Witcher 2: Assassin Of Kings takes the series full open world RPG and is the most ambitious project the acclaimed studio have ever under took.

But the important thing here, beyond the hype is for a fairly take them or leave them fan of RPGs, how does it play?  I chose to pick up (or more specifically download) the Xbox One version, and after about seven hours with it, I can confidently say … this game has me hooked.  Think a cross between Red Dead Redemption, The Elder Scrolls series and to some extent Assassin’s Creed and you sort of get the idea.  You play as Geralt, a bad-ass monster hunter or Witcher; feared, respected and reviled in equal measure.  The quest kicks off with you in search of the sorceress Yennifer; a former lover of Geralt’s who he’s been tracking for years and is close to catching up with her.  Also you are on the look out for your prodigy Witcher / sorcerer Ciri, who we meet in the flashback prologue where you train her as a child.  The story holds many twists and turns however, places to visit monsters to hunt and kill for bounty, and a massive, highly detailed world to explore and get lost in.

This kind of game for me can be a little daunting and I’ll admit it took a while to really get into.  The fighting controls are a little unwieldy at first until you get your head around them and learn to throw in magic and protection spells with your swordplay.  Yet with plenty of character customization, potions to brew and abilities to unlock … this becomes a very deep and engrossing experience that I’ve really only touched the surface of.

On the Xbox One it looks fantastic.  One of the most impressive aspects is the weather and the lighting, how trees blow in the wind, rain fall, mist rolls across the land and moonlight bleeds in through the trees (or eye-burning sunlight).  Also add the sheer detail to houses, villages, grass, very realistic water and the wealth of creatures and monsters … and a myriad of interesting folk and characters.  This is a joy to behold.  There are a few (minor) fluctuations in frame rate and occasional pop-in or glitches, and the game did freeze on me once after dying.  So it’s not perfect, but for the scale and number of things going on it’s still an impressive technical achievement that will only get smoother and more polished with future patches. 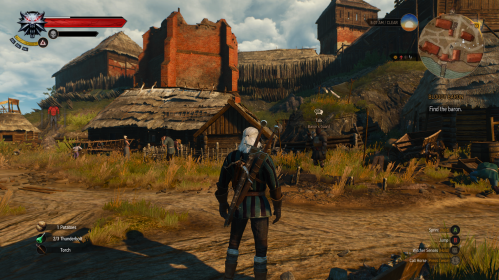 Screenshot captured directly from my Xbox One

Anyone after a long, rewarding and deep game to really get involved in, then you can’t go wrong with this epic RPG.  It has it all and I’m sure will throw up many surprises and memorable situations as I progress.  It’s out now for PC, PS4 and XB1.  So what you waiting for?  Time to kick some monster ass and break some hearts.

So what have I been up to lately?  Well I managed to complete Assassin’s Creed Unity on the PS4, the first AC game I have ever kept interested in until the end.  Why?  I think setting was key.  Of the previous games in the series I have played, most have been set either in medieval (AC 1 & 2) or around the time of the crusades (AC 3) and well, the pirating of AC4 never appealed so I didn’t play that one.  However this one was set in Paris, during the revolution, the time of Napoleon etc. and it was a brilliantly atmospheric setting I personally have plenty of interest in.

Secondly I have been playing Grand Theft Auto V.  Now eagle-eyed readers of this blog may recall me posting about it a while back when I got it on the Xbox 360.  Well, for one reason or another I didn’t play it all that much of it, and since jumping to the next-generation with the PS4 and Xbox One, I thought it was high time I took a second look following it’s revamped re-release on these consoles.  I picked it up on PS4, and must say for what is technically a last-gen title, the detail (with improved textures, lighting, effects as well as an enhanced array of music on the various radio stations) it’s one of the best looking games I have played to date.  GTA V is a fantastic game following the exploits of three characters; Michael the former gangster now in witness protection, Franklin the stereotypical gang-banger hoodlum and Trevor the meth-dealing lunatic.  The missions are cinematic and the world is alive and complex and massive.  There are a ton of things to see and do and it never feels boring.  I’m loving it.  Check out a few screenshots I took with the PS4 to show off how damn gorgeous this next-gen version looks in the flesh: 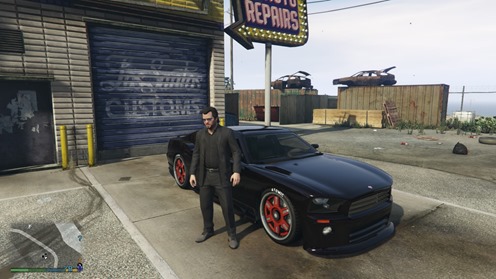 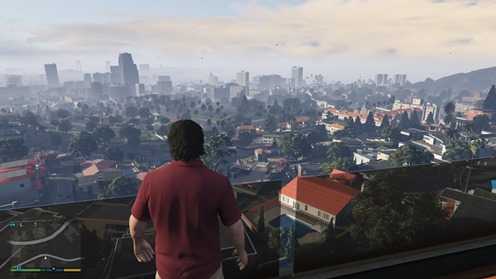 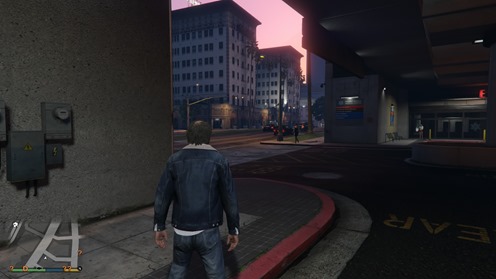 On the gaming horizon (next Tuesday to be specific) is The Witcher 3 Wild Hunt.  A heavily hyped and very well reviewed game that I have pre-ordered for my Xbox One.  From everything I have read and seen, it’s sounding like it will be a mammoth RPG adventure to rival the likes of The Elder Scrolls and Final Fantasy, with you as a bad-ass monster hunter known as Garalt, who inhabits a huge world that is one of the biggest apparently ever made and full of detail, missions, characters and true next-gen visuals.  I have watched some gameplay and read several reviews, and suffice to say I am VERY excited.  Roll on May 19th … I’ll do an early impressions some time in the week. 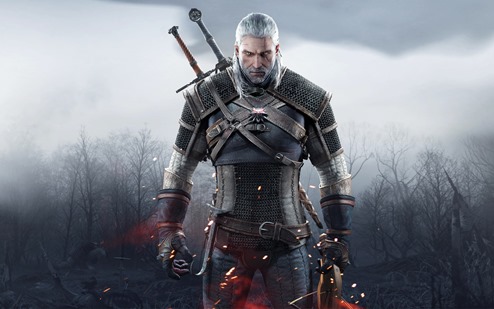 In other news, I’ve sadly not managed to secure a trip to the cinema to see The Avengers: Age Of Ultron yet and can see it being a Blu-ray review later in the year.  The same might go for Mad Max Fury Road, but I’m still optimistic about getting to see that one, so watch this space (and no, going by myself doesn’t appeal all that much).  I have a few movies on the agenda however, the names of which I’ll keep to myself for now and let you be surprised when I post the reviews.  Yeah, I’m all about the tease.

On the TV watching front I have been pretty addicted to Better Call Saul, that breaking Bad spin-off starring everyone’s favourite crooked attorney Saul Goodman (or Jimmy Magill as he’s currently known).  It seems to have all the polish and great writing of Breaking Bad (well, it is by Vince Gilligan after all) and just keeps getting better and better.  I’m also watching The Following season 3 (yeah, yeah I know…we’re not getting a season 4…boo hiss) which has again been brilliant this year.  Clearly there is no accounting for taste, so another show hits the skids.  Talking of TV, I’m also looking forward to season 3 of Orange Is The New Black, a show at first I wasn’t entirely sure was me … the first series was good but a little lightweight, but with an excellent and gripping season 2, I am now officially a fan.  Damn Netflix just keeps on giving, doesn’t it?  I am also watching Brit drama Luther on it at the moment which stars popular actor Idris Elba as a tough Police detective who specialises in catching serial killers – right up my alley.

So other than the above, and getting over some man-flu and a tickly cough that just won’t quit … it’s been all about work, which is going very well.  I am learning some new stuff to do more with secretarial tasks and finding it challenging and educational.  Love it when my job gives me those opportunities to learn new skills and I think it helps build a real profile and shape me for the future.  I’m also of course still looking forward to finally seeing my favourite band Garbage in November when they appear at Brixton Academy in London.  It’s going to be such a once in a life time experience for me, someone who doesn’t really get such opportunities.  I have my big brother to thank for making this happen and with my 40th birthday very much right after, November is looking to be a real belter.

Well, enough from me for now.  Hope you’re all having fun in whatever you’re all up to and continue to check in on me and this blog regularly for more updates, reviews and gaming impressions.

I have kept a close eye on this week’s games convention in Germany, Gamescom and some of the gameplay videos that have surfaced really impressed me.  I think there were some exciting reveals, even if the increasing focus on Indie titles leaves me a bit cold (I tend to find these budget games get a bit boring after a few plays…).  But I’m all for the blockbuster franchises and games like Call of Duty Advanced Warfare and The Witcher 3: Wild Hunt looked very impressive.

My highlights though remain these two:

Sadly at the moment only AC has a release date (pencilled in for Oct 28) but Remedy seem to be keeping tight lipped about when we’ll get our hands on the very cool looking QB.  Either way, lots to look forward to for gamers.

Well it’s day one of the E3 event in Los Angeles, an annual gaming event where publishers and game developers showcase all their big games for the next year or so.  My verdict so far?

I watched the Microsoft event that showed off the upcoming games for the Xbox One and well, some underwhelming announcements… ‘Fable Legends’, ‘Phantom Dust’ (??) but games such as a new ‘Crackdown’ and the new exclusive from Platinum Games ‘Scalebound’, look very promising.  Indie platformers ‘Ori and the Blind Forest’ and ‘Inside’ both look great also.  The trailer for ‘Forza Horizon 2’ looked decent too, with some cool-looking weather effects.

Multi-platform titles showcased included ‘The Witcher 3: Wild Hunt’, ‘The Division’ and ‘Assassins Creed: Unity’ … all of which looked lush, even if UbiSoft’s reputation for showing off gameplay footage running on high end PC hardware passed off as in-game Xbox One or PS4 gameplay is a concern, even if the controversy over the visual downgrade of Watch Dogs was a bit of a storm over nothing.  The game still ended up looking awesome in my opinion.  So we’ll wait and see.  A brief trailer for ‘Rise of the Tomb Raider’ got me rather salivating though, I must admit.  Love me some Lara Croft. 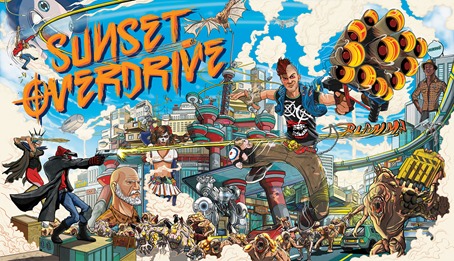 The other news coming in is that the new development tools given to developers to utilize the reserved graphics power for the Kinect, will mean better resolutions and visual performance for X1 games, which has to be a good thing.  Oh and another trailer for ‘Sunset Overdrive’ got me, if possible even more excited.

So final thoughts, this was a good day for the Xbox One.  No major showstoppers, but some very interesting announcements.