I’ve never been the biggest fan of Adam Sandler. His movies especially these days just slip under my radar and except for The Wedding Singer none of his output has ever impacted me much. However, some positive word of mouth has been doing the rounds about this, so I thought I’d check it out. Sandler plays Howard, a crooked jewellery store owner and general wheeler-dealer with a wife, kids and a girlfriend on the side who lives his life ducking mob loan sharks and continually struggling to keep one step ahead of people. After obtaining some priceless uncut gems however, a way out just might be on the cards. 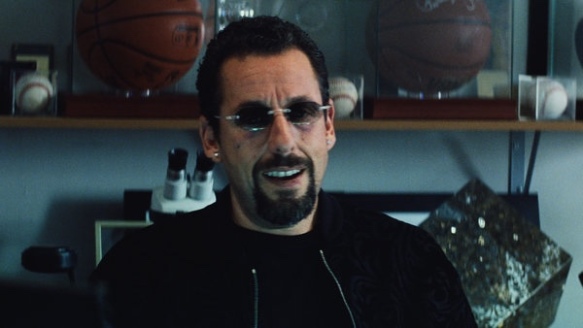 I found Howard’s lifestyle exhausting to watch yet it’s portrayed fairly realistic even if it never made me sympathise with such an obviously self-inflicted plight. What’s going on and why is pretty much glossed over as well. And… despite best intentions, Sandler fails to be much more than a caricature surrounded by more believable casting (including NBA star Kevin Garnett as himself). This isn’t helped by what appears to be a bad Heat-era Al Pacino impression Sandler is doing throughout. . With that said the sheer relentlessness of the direction is commendable.

For fans this proves a departure for Sandler they might appreciate but for me he didn’t stand out or prove all that appealing … the story pretty much goes exactly where I expected also. Forgettable.