A movie that starts with a woman being set on fire in a field, certainly isn’t messing around and so begins this uproarious if somewhat rough around the edges horror movie. A cop stumbles upon a delirious man injured whilst escaping his pursuers, and quickly takes him to a nearby hospital. However it soon transpires the man has run away from a cult group who quickly surround the hospital, cloaked in white and sporting an ominous black triangle symbol. So sets forth a battle for survival as events quickly descend into hell. 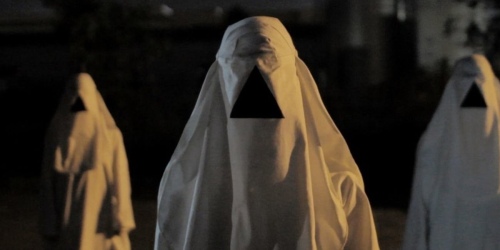 Immediately it’s clear this is fairly low budget stuff and skimps on any star appeal in favour of ‘limited’ performances from its cast, especially the cop acting as the movie’s main protagonist. Thankfully a frantic pace helps disguise such shortcomings and delivers lots of violence, gory set-pieces and some decent practical creature effects. This movies wears its influences proudly and I recognised nods to the likes of From Beyond, Hellraiser and The Thing. It lacks the tongue-in-cheek appeal of say a Stuart Gordon or John Carpenter movie and takes itself a little too seriously. Also at times the film making gets rather amateurish with incidents of confusing editing and shots where it’s not that easy to tell what you’re looking at.

The second half of the movie however cranks up the craziness, monsters and horror … and this turned up the entertainment factor for me immensely, meaning that overall I’d say check this out – especially if 80’s-style throwback horror is your jam.