I’ve always appreciated the music of Elton John and consider several of his songs all-time classics. Following on from Bohemian Rhapsody this similarly tells the life story of one of the UK’s most iconic stars, this time with less of a tragic ending.

Told in a surreal musical style that takes those famous songs and matches them with key events in Elton’s life… this has Taron Egerton on amazing form, delivering all the nuance, emotion and flamboyance of the man himself whilst also singing all the songs as well. The musical approach is done very well even if at times I wished certain favourites were just delivered normally instead of other cast members stealing certain parts as way of delivering the story. Jamie Bell is very good as Elton’s writing partner Bernie, although Bryce Dallas Howard proves a bit forgettable as Elton’s disapproving mother.

The focus here is mostly Elton’s struggle to be accepted by his parents or find love. It’s occasionally a little overly stylish, and despite showcasing many famous songs, the omission of Candle In The Wind is puzzling. Yet this still delivers an occasionally moving, often eye-opening story with some seriously feel good moments, aided by a killer soundtrack.

The spy spoof is nothing new, but placed in the hands of Matthew Vaughn who breathed a welcome injection of rebellious attitude to the costumed hero genre, with Kick-Ass and probably made one of the finest X-Men to date in First Class, I’d say we were in safe hands.  A troubled teenager who just so happens to be related to a former Kingsman secret agent gets the chance of a lifetime to join the top-secret British agency just as a megalomaniac internet billionaire (Samuel L. Jackson) prepares to cause mass genocide.  Cue plenty of gadgets, tailored suits and before you can say Mark Hamill cameo it’s all action, intrigue and tongue planted firmly in cheek. 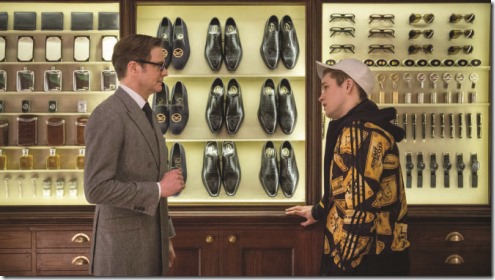 Colin Firth, everyone’s favourite swarve English gent is perfectly cast as Galahad, the Kingsman’s top agent who single handily takes said troubled teenager Egsy (Taron Egerton) under his wing and helps him crawl out from under his Asbo lifestyle and housing estate surroundings to become someone capable of saving the world.  Jackson plays a little against type as an (annoyingly) lisping villain but is clearly having a ball – even if his character is a tad too cartoony for my liking.  The whole training stuff also gets rather predictable. Add to this a budget clearly spent on it’s decor, Michael Caine and designer-suits rather than decent effects (honestly, CGI blood, CGI explosions.  Who ever said that crap looked any good?).  But such shortcomings aside, director Vaughn pulls out all his nudge-nudge wink-wink tricks, bending and breaking genre conventions to throw in the odd surprise and a few slam-dunk gags (land of hope and glory?)..

It lacks the venom of Vaughn’s earlier Hit-Girl scene-stealing tour-de-force and clearly struggles with over ambition (the international locales can look noticeably fake, and action relies more on fancy camera trickery than genuine fight choreography).  Enthusiasm counts for a lot though, and the cast, crew and excellent soundtrack (a fight played to the tune of “Give It Up” by K.C. & The Sunshine Band?  Oh yes!) still make this worth a watch.  Bond has nothing to worry about though.