Rocker turned director Rob Zombie has over the years carved out his own sub-genre that despite strong influences from grind house shockers like The Texas Chainsaw Massacre and The Last House on the Left, delivers a style that’s all his own. It can be an acquired taste that’s for sure, and not much has changed since 2005’s The Devil’s Rejects that this is a direct follow up to. With a clear tip of the hat to Natural Born Killers, in the years since their incarceration, the Firefly gang have become celebrities. After one of them escapes, a violent home invasion ensues to convince a Prison warden to help crazy as-a-loon Baby Firefly (Sherry Moon Zombie) escape also. 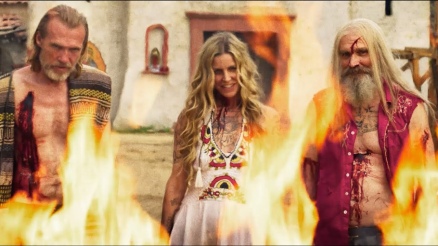 Zombie’s direction attempts to add style and panache to a movie that’s neck deep in sleaze and grime. It’s characters carry a self-importance that doesn’t make them glamorous, but simply pompous, and with the lack of interesting adversaries, including a none existent police presence, there’s a distinct lack of tension or drama throughout.

If you’re here to find out if this delivers the required violence and gore then yeah, there’s several nasty scenes including a throat slit, stabbings and a (unconvincing) face removal – but almost all is watered down by what appears to be crappy CGI blood. Bill Mosely is the stand out as Otis, and Sherry Moon is equal parts entertaining and annoying – so the acting’s a mixed bag also. The under-use of Sid Haig (who recently passed away) as nutty clown Captain Spaulding is disappointing but in a movie this half-arsed, perhaps it wouldn’t have been his finest swan-song. For die hard Zombie fans only.