Well had a week to get to grips with a few PS3 games, so here are my impressions of them.

This very vibrant, comic-book styled platform shooter was an immediate wow-factor for me.  Mainly because of its look and personality in this age of grey and muddy looking ‘realistic’ games.  I never really bothered with this franchise on PS2, for reasons of snobbery more than anything else (I was more of a Jak & Daxter fan-boy), yet having played a fair bit of this – I feel I have missed out.  Yet that can now be rectified.  The games big pull is the wealth of upgradable weaponry on offer, some very comedy-based, such as the tornado launcher or floating disco ball, but this always adds variety to every encounter.  The game is also a joy to control, and blowing up enemies or smashing crates just never seems to get old.  To be honest I haven’t played a game this much ‘fun’ since Super Mario Galaxy.

Playstation 3’s PSN store is full of downloadable content, and this interesting looking side-scrolling shooter attracted me after seeing footage of it on the ‘net.  The premise is simple – pilot your tiny ship in dangerous alien worlds where either hot lava or water or falling debris is the danger as your aim to rescue the stranded astronauts and get home safe.  Each level is progressively more intricate and deviously designed with some clever elemental puzzles to figure out.  The art style is very cartoony and looks amazing in HD.  Above all else this game feels ‘soothing and stress free’ and is a good option if you want something a little less demanding, yet still addictive. 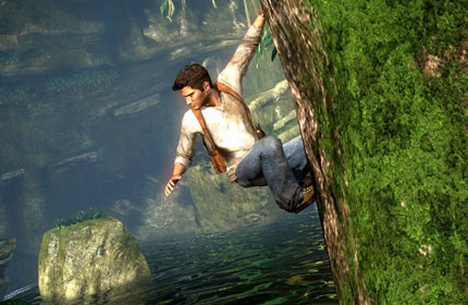 This Tomb Raider meets Gears Of War clone has your controlling one of the most charismatic characters I’ve ever seen, named Drake as he traverses jungles and temples in a quest to discover Sir Francis Drake’s lost treasure (or something like that).  What immediately impresses is the highly detailed locations, the cinematic art-style and impressive cut-scenes with near-hollywood like animation and story telling.  Developer Naughty Dog have come a long way since the days of PS2 platformer Jak & Daxter and with the acclaimed Uncharted 2 being toted as one of the best games released in years, I look forward to what gaming delights this one has to offer.  Saying that I am finding the combat aspects of the game less enjoyable than the fluid exploration and climbing, but hey, that’s just a small gripe.

I have also got my hands on the demo’s for Bayonetta and Killzone 2,  as well as PSOne classic Metal Gear Solid.  All three games have their merits, but owning both a PS3 and an XBOX 360 now, the 360 version of Bayonetta is definetly the one to go for, with a better level of graphical detail and a more vibrant colour pallet – also the control pad seems better suited.  Killzone 2 is surely a must-own going from the all too brief demo, and Metal Gear remains a very well made game that looses none of its playability despite very ageing graphics.

Well, I went and done it.  I now have a Playstation 3.  I went for the new ‘slim’ redesign (pictured), and have to say am very impressed with it, aesthetically.  My impressions of the machine, is that as far as online goes, I haven’t had chance to try out what multiplayer is like yet, but the Playstation Network, with the store etc is very impressive and easy to navigate.  The wealth of content here too is to be commended.  As a fan of XBOX I’m not going to compare the services, as I don’t want to knock either system (yes, splinters in my ass from sitting on the fence).  Other than that the design of the user interface is well done and there are lots of options to tinker with.  Playback of Blu-ray content can not be faulted either and access to BD-Live functions is a valued extra feature you may not normally use on a stand-alone player.

Games-wise I have been playing Ratchet & Clank: Tools Of Destruction and download game Pixel Junk Shooter, and both have impressed me.  I also checked out the demo for Kill Zone 2 and was suitably astonished by the graphics and atmosphere, even if the sluggish controls will take a bit of getting used to (the PS3’s duel-shock controller, as with the controllers on PS1 & 2, never really suited first person shooters in a way the XBOX & XBOX 360 controllers do).  But this is early days, and I have much to look forward to, especially the likes of Uncharted 1 & 2, and in the coming months, Final Fantasy XIII.

Thats not saying that the 360 is going to be overlooked.  I am still playing Shadow Complex, and aim to get hold of Bayonetta in the coming weeks.  I am also looking forward to Bioshock 2 and Alan Wake this year.  So looking to the year ahead, I feel I am in for some real treats.