I was quite hyped for this when I saw the trailer. Thor Ragnorok remains for me one of the more enjoyable Marvel movies, so going into this follow-up I was hoping for another dose of entertainment. This time we have Thor (Chris Hemsworth) out to stop a maniac warlord called ‘Gorr the God Butcher’, who blames the gods for the death of his daughter. Back on earth, Thor’s ex girlfriend Jane (Natalie Portman) is dying of cancer until she discovers hope in Thor’s shattered hammer.

Directed again by Taika Waititi (Jo Jo Rabbit) this mostly light-hearted adventure is full of jokes and visual pyrotechnics as Thor wages war and bumps into characters like The Guardians of the Galaxy and Zeus (Russell Crowe), all to the soundtrack of Guns N Roses. Yeah, sometimes the jokes don’t always land, there’s a few poor effects shots and I grew tired of the screaming goats quickly. Yet the action is fun, the tone is fun and the story good enough for this kind of thing.

It’s a shame then that, despite best efforts Christian Bale is simply ‘ok’ as the villain, failing to figuratively ‘jump out of the screen’. Otherwise, it’s hard to find much fault here. Many of the scenes are very enjoyable and I got caught up in the action and entertainment factor the movie was clearly going for. Natalie Portman also held her own alongside the gods (whilst avoiding ‘woke’ pitfalls of other recent movies). Overall better than critics and the generally negative culture of the internet might have you believe. Simply put – I’d watch it again.

As much as I’m a fan of Natalie Portman, I confess to not really seeking out her stuff since the acclaimed Black Swan … strange when I consider that one of the best movies of the last ten years.  So I jumped at the chance to check out this latest Netflix Original movie.  Portman plays a biological scientist who following the mysterious disappearance of her military officer husband (Oscar Isaac) gets recruited by a government organisation headed by Dr Ventress (Jennifer Jason Leigh).  You see, a strange alien encounter has occurred affecting a now closed off area where a strange vapour has cut communications and anyone who has ventured inside, has not come back. 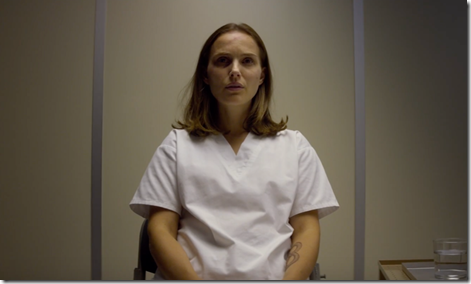 This gritty and scarily-convincing sci-fi drama is helmed by Alex Garland, the man who made Ex Machina, another great thought-provoking piece of sci-fi.  This guy clearly understands his subject and has delivered another very effective experience.  The entire movie has a tone to it that’s rather dream-like and sometimes messes with one’s head; trying to figure out what’s real and what’s not.  Add to this flashbacks exploring Portman’s and Isaac’s relationship, with several revelations along the way and this proves a meatier story than it first appears.  The alien ‘presence’ and how it effects the female scientists who go looking for answers is also handled imaginatively and gives an interesting spin on the whole alien-encounter subject, with truly unnerving possibilities.

It takes a while to get going, and is marred by some questionable CGI, and the logic behind the expedition left me a tad puzzled.  However, with strong performances across the board, especially an excellent Portman – this is well worth checking out … especially if you’re after something that will leaving you really thinking afterwards.

I remember seeing a trailer to this way back when and going fairly blindly to see it in the cinema.  Me and a friend of mine were blown away by it, and it quickly became one of our all time favourite movies.  The story of twelve year old Mathilda (a brilliant debut from Natalie Portman) who in the aftermath of her family being wiped out takes refuge in the company of the shy, illiterate hitman who lives down the corridor (Jean Reno) … a friendship blossoms and soon she’s hatching a plot to take revenge.  Gary Oldman is a corrupt DEA agent who cracks pills between his teeth and listens to Beethoven whilst killing people who rip him off – and orchestrating all this with finesse and skill is French new-wave director Luc Besson (Nikita, The Fifth Element) to a soundtrack by Eric Serra.

This is a movie that has it all, great performances from the street-wise but naive Portman all cocky but falling apart at the seams, to Reno’s subtle and convincing portrayal of a child in a man’s body who just happens to know how to kill.  Then there is Oldman, in possibly his craziest but most memorable role (get me eeeeeeeeeeverybody!!!) as well as a very good supporting turn by Danny Aiello.  Then there is Besson … arguably his finest movie, with such poetic, ice-cool camera work enhanced by an amazing soundtrack and moments of slick action executed with the utmost style and panache.  This may not be an action-heavy movie (it really only has two scenes here) but the tension that builds up, and the great performances throughout, peppered with well judged humour and such emotion … this is one of the few movies I would genuinely call a masterpiece.

This 20th Anniversary Edition by Studio Canal boasts a decent HD image quality that has some vibrant colour and good detail, especially in close-ups.  Softness rears its head in places but overall this is a very pleasing presentation.  For this movie too the 5.1 DTS Master Audio Soundtrack is excellent with a really immersive soundstage and great clarity throughout.  The Blu-ray houses both cuts of the movie and although I chose to watch the tighter Theatrical Version, I would recommend fans check out the extended Director’s Cut for such extra scenes like Mathilda’s Russian roulette scene, the extra hits that Leon takes Mathilda on and a few more moments of Mathilda’s inappropriate advances towards her hitman friend (!).  Extras however are poor, with just two interviews and a noticeably absent Besson, Oldman or Portman with no commentary, something Besson never does anyway – so no big shock there.

Big special effects blockbusters are an easy type of movie to like – they have plenty of action, larger than life characters and are usually a great deal of fun.  The onslaught of the comic book super hero has quickly become a genre of it’s own with such big hitters as the Iron Man series and Avengers Assemble being personal favourites.  Here we have the follow up to the highly entertaining Thor with beefcake Chris Hemsworth (Snow White and the Huntsman) reprising his role as the mighty Norse God, who comes to the aid of earth-bound scientist Natalie Portman when she becomes infected by a deadly virus known as the aether – an ancient weapon created by the Dark Elves centuries ago in an attempt to turn the various realms into permanent darkness. 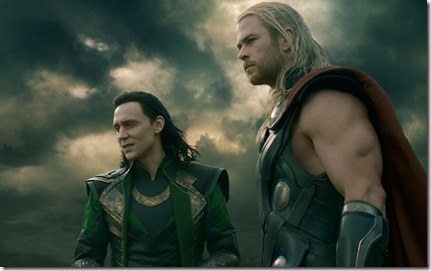 Of course this rather convoluted and throw-away plot is merely an excuse to watch Thor bash and hammer his foes and see buildings get demolished.  I liked how we get a lot more of Asgard this time around, even if Thor’s siblings are mostly forgotten about but for the boo-hiss of Loki, everyone’s favourite grinning villain (or is he?) from the first film and Avengers.  Yes he’s getting a bit over-used but Tom Hiddleston does a fine job, paring with Thor so well he pretty much stole the show for me.  Add to this a tired looking Anthony Hopkins returning as Odin, Thor’s dad, as well as appearances from Rene Russo (remember her?) and Idris Elba – making this easy to watch and get caught up in.

Less can be said for the mostly clichéd villain (with an unrecognisable Christopher Eccleston as lead baddie Malekith under the sort of makeup these kind of characters ALWAYS have).  Yet a large portion of the story being set in London was welcome, and the action and general banter between the characters decent – with some fun jokes and cameos along the way (was that Captain America?).  Ultimately though Thor 2 is a rather by-the-numbers sequel and lacks some of the heart of the original, bringing nothing new to what is already becoming very familiar territory.  But you’ll still find me in line for Thor 3.  Weird huh?

Thought I would take a look back at the last twelve months on this blog and offer up a definitive review of the year.  It is going to be split into the four quarters of the year, and will conclude with my final Top Ten.  Hope you enjoy reading the following highlights and disappointments… 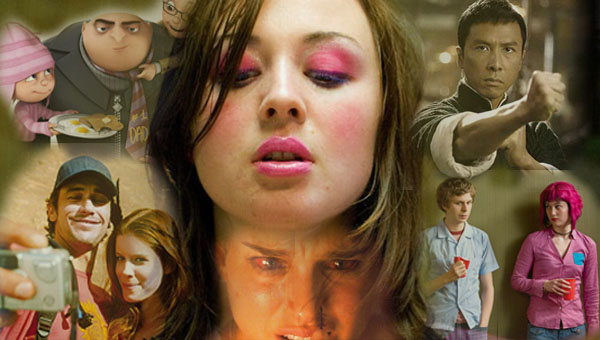 January kicked off somewhat underwhelming with Sci-fi horror Splice, which although entertaining, didn’t make for a particularly memorable movie overall.   That couldn’t be said of the gore & tits fest that was Piranha 3D, certainly one of the most immediately entertaining movies this year, even if it’s b-movie styling means some may pass it off as rubbish.  Scott Pilgrim Vs The World was another highlight, with its clever camera-work and comic book meets video game style, and as ever Michael Cera was a joy.   Disappointing was the Sylvester Stallone, Jason Stathan, Dolph Lundrgren testosterone orgy The Expendables, case of a great idea badly realized … Perhaps Stallone should have left directing honours to someone else?

Once we hit February however, one of the best movies was Danny Boyle’s 127 Hours; a stunning achievement in taking a true-life tale of survival and making it both powerful, gut-wrenching and funny, with a startling central performance from James Franco.  Then as if something was in the water as far as movie releases were concerned, we also got Black Swan, a heart breaking, chilling exploration of madness with a brilliant turn from Natalie Portman and top-class directing honours from Darren Aronofsky.   It was no surprise that Portman would then scoop Best Actress at the Oscars the same month.  Of course such a run of top-class movies couldn’t last long, and the enjoyable Paul starring the usually excellent Simon Pegg and Nick Frost crumbled slightly under its reliance on one gag … a funny smart-mouthed alien.  Thankfully February concluded nicely with the surprising The House Of The Devil, a great throw-back to 70’s occult horrors like Rosemary’s Baby and The Omen, and despite a low-budget, really delivered.

March seemed to be the month I (albeit briefly) got my kung-fu movie loving mojo back, and offered up two impressive examples namely Donny Yen starrers Ip Man & Ip Man 2, expertly and stylishly directed by Yen himself and both offering fascinating tales of a true-life martial arts master.   Animated comedy Despicable Me was a gem, and in my opinion outclassed Toy Story 3 for pure entertainment, and with a heart-warming story, really impressed.  Takers, a heist movie starring Hayden Christensen, Idris Elba and Paul Walker was a satisfying if unimaginative take on movies like Heat.  The Disappearance Of Alice Creed offered up a gritty brit-thriller with a brave, revealing turn from Gemma Arterton, and concluding March was Ozzy toungue-in-cheek horror The Loved Ones, offering up stalkers, unrequited love and cannibalistic ex-boyfriends!

…Stay tuned for my run down of the following three months soon.