I have memories of this 1976 horror classic as being really unsettling and disturbing, and recall catching it on TV a long time ago, back when I was first discovering horror.  Based on the Stephen King book of the same name, incidentally the famed author’s debut – this tells the simple story of an outcast school girl, bullied by other students and living in the shadow of a controlling, deeply religious mother.  However Carrie hides a secret, the fact she can movie objects with her mind, and sometimes experiences such power manifesting when she’s at her most troubled.

Brian DePalma’s movie is mostly a teen drama; an exploration of youth and peer pressure from woman’s perspective.  To this extent it’s a very feminist movie with strong themes of puberty, menstruation and womanhood.  It’s also of that glut of religion themed horrors that over-flowed from the 70s, like The Omen and Rosemary’s Baby even if it’s never quite as gritty or unsettling as those two.  Add in elements of exploitation movies and schlocky-horror of the time and quite a cocktail we have.  Sissy Spacek as the title character is mesmerizing and iconic, but then again so is Piper Laurie as her nutty mother who gets all the best lines and is probably the real creep factor of the show.  Add to this decent runs from Amy Irving, a bitchy Nancy Allen (Dressed to Kill, RoboCop) and a memorable John Travolta and this ticks all the boxes.

I didn’t find it anywhere near as scary as I remembered, and it’s occasional light, almost comedic moments sit uneasy with the horror.  This is however a movie where DePalma shows his true colours, with a mostly haunting, dream-like atmosphere throughout, leading to a stunning, still show-stopping finally that sent equal amounts of shivers and relish through me as Carrie takes her vengeance.  For me it remains one of the most heart-stopping moments in cinema history.  With this movie DePalma brings together all the techniques he’d honed in the earlier years.  It’s as showy and eye-catching as you may expect from the director but also surprisingly touching and sweet, which you may not expect considering the movie’s legacy.  It’s also a lot better than any carbon copy remake. 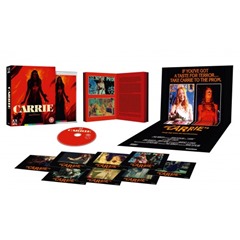 I managed to pick up the limited edition version of the Arrow Video blu-ray and well, what can I say?  The packaging firstly is stellar, housed in a nice slip case that has a 40 page booklet, art cards and a poster.  Also, the movie is in great shape.  The 4K restored image is vibrant and detailed despite an intentionally soft-focus look, and sound is also excellent with clear dialogue and an especially thumping soundtrack when the prom (from hell) occurs.  We get soundtracks in both the original 2.0 stereo as well as very good 5.1 DTS Master Audio.  Add to this the disk itself being filled with extras, with a brand new audio commentary from two film critics that is both funny and fascinating, and a wealth of features comprising of interviews, behind the scenes footage, location footage and explorations of all the various version of Carrie that have been made, from remakes to a musical(?).  The absence of both King or to a lesser extent Travolta is disappointing, however this is a small niggle for what is mostly an exhaustive and epic release.

Another entry in my growing collection of Brian De Palma movie reviews, this time the director’s much admired thriller from 1980.  This is probably the movie that borrows most from Italian Giallo, a genre of stalk and slash thrillers made famous by directors like Mario Bava and of course, Dario Argento.  It also borrows heavily from Hitchcock (especially Psycho), another of De Palma’s regular influences.

A house wife (Angie Dickinson) trapped in a sexually unfulfilling marriage, finds herself yearning for an affair and confesses as much to her psychiatrist (Michael Caine).  However following a chance encounter at an art gallery that leads to a one night stand, the housewife is brutally murdered.  A hooker (Nancy Allen) turns out to be the only witness.

A very of-it’s-time experience initially, with some explicit nudity and rather awkwardly handled sex making early scenes resemble a porn film.  However once the killer strikes things shift into gear dramatically and De Palma’s cinematic flair spreads it’s wings.  This is another movie that is visually captivating and often ingenious … a stand out art gallery sequence and a tense subway scene both showcasing a director at the top of his game.  Add to this a murder-mystery plot that twists and turns wonderfully and even when you discover who the killer is, re-watching certain scenes reveal clever little details and clues.  The acting is mostly adequate with even Michael Cain proving limited and at times a bit wooden … although Nancy Allen proves much more enjoyable.  However like the Giallo the movie tips it’s hat to; acting and performances aren’t the big draw, more so tension and style and well, the occasional bloody murder.  The movie lacks the body-count of a fully fledged Italian thriller, and retains it’s own quirks, with the inclusion of a geeky science student (Keith Gordon) and a stereotypical Police chief (Dennis Franz).  As a package though this delivers a gripping narrative with some genuinely impressive sequences, worthy of it’s legacy.

The Blu-ray from Arrow Video boasts a rather soft-focus but otherwise clean image.  Colours are rather muted and overall it’s simply acceptable with no real ‘wow’ factor.  More note-worthy is the sound, with a dramatic, perfectly implemented orchestral score and crisp dialogue, both in stereo and a punchy 5.1 HD Master Audio.  I should add that the movie is uncut for the first time in the UK.  Extras are plentiful with several featurettes, including a detailed making of as well as a photo gallery.  There’s also a detailed booklet included that covers the director’s influences and an analysis of the movie by critic Maitland McDonagh.  Again no commentary from De Palma which would have been great but as it stands this is decent treatment for a somewhat forgotten classic.