I had been looking forward to this ever since I read director Guillermo Del Toro’s next project wasn’t going to be The Hobbit, but instead a movie about huge mechanized robots vs huge sea creatures.  Del Toro can do no wrong in my eyes, and his popular Hellboy movies not to mention Pan’s Labyrinth are proof of his talent and skill.  However what to expect from this latest offering, was less easy to anticipate.

Charlie Hunnam (Sons Of Anarchy) plays Raleigh, a soldier who pilots one of these enormous robots alongside his brother to prevent the enormous Kaiju from destroying the world with their warpath of destruction.  From the off it seems like an impossible task, the power and sheer size of these creatures meaning the world must surely be doomed?   Yet after one confrontation claims the life of Raleigh’s brother the ‘Jaeger project’ is shut down, causing the soldiers to form a resistance in anticipation of another attack.  Lead by Idris Elba’s Commander Stacker, its not long before Raleigh is called back to the front line, where he befriends Japanese rookie Mako (Rinko Kikuchi) who is fighting her own demons resulting from the attacks. 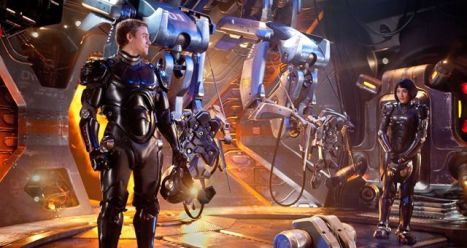 This is a movie predominantly about big things laying the smack-down against big things, and its a (very) noisy, brash, intense and epic experience.  Del Toro paints the landscape with his expected style and exuberance, with fantastically shot encounters (no shaky cam here) and superb creature and robot designs.  Clearly one big homage to Japanese mech anime like Mobile Suit Gundam and Patlabor, as well as the many Godzilla movies the country has churned out over the years.  Casting is decent with the always effective Elba and a cameo from Ron (Hellboy) Perlman is always welcome.  However, leading man Hunnam has always been one of those pretty-boy actors whose overly sincere way of delivering lines comes off as wooden – he does look the part, there are just actors out there with more charisma.

Sadly this all masks what is essentially a very basic premise (something about an underwater rift that is glossed over in the movie’s opening minutes) and well, with sea creatures as the bad guys – we don’t have a villain of any real interest beyond their ability to knock over buildings.  Add to this two scientist who come across as particularly irritating (and no, are not funny), and for everything this movie does right (the look, the superb effects, the battles) it always seemed to do something wrong at the same time.  Del Toro has still delivered an event picture to really blow the blockbuster season out of the water, and I think at home I might be able to settle into its overwhelming bombast better – but as a cinema outing, I actually found it a bit much.