I recently received the box set of this once much loved but ultimately milked to death franchise that I recall enjoying a lot in my formative years.  I hadn’t really given the movies much thought in probably the last twenty years but the prospect of checking out at least the first one was surprisingly appealing. 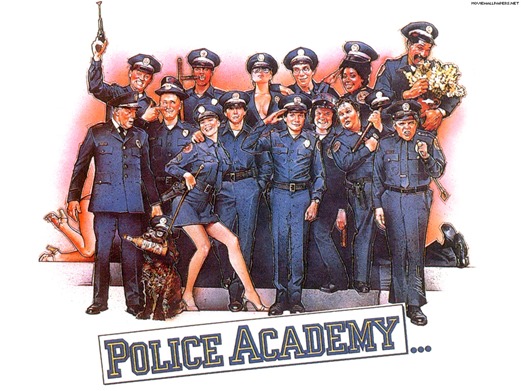 This follows the story of a law being passed that relaxes the rules on citizens joining the Police force.  One such scoundrel is Carey Mahoney (Steve Guttenberg – remember him?) who following an altercation at a car park is arrested and given one final chance to ‘clean up his act’ by the Police chief whose had enough of seeing his face at the station.  Mahoney therefore is forced to join the Police Academy alongside a number of other oddball characters.  Here we’re introduced to many of the other series stalwarts … the gun-obsessed Tackleberry, the man-mountain Hightower, the squeaky voiced Hooks and series fave; the sound effects spouting Jones (Michael Winslow).   We also get a love interest for Mahoney in the gorgeous shape of Kim Cattrall.  There’s an immediate familiar charm to this movie, helped by a memorable theme tune and highly entertaining, albeit cartoon-like characters (who can forget the dictatory 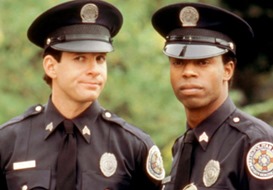 Looking back on this kind of comedy, the Blue Oyster bar scene, as comical a moment as it is,  would probably be a definite no no today.  Also the word ‘fag’ is thrown around occasionally, whereas sex-mad heterosexual guys are portrayed as heroes.  Have we really come this far since the eighties?  Yet with that being said, there’s no denying how entertaining and fun I still found this even if my brain has been ruined by much more outrageous fair.  An 80s comedy classic worth re-visiting..

The Blu-ray boasts a very clean and at times eye-catching image quality especially for this type of movie.  Colours are well realised and even though I feel a bit of grain reduction has occurred, overall it’s a good looking presentation.  The audio in DTS HD Master Audio lacks some punch and the dialogue whilst clear is a little scratchy.  Extras consist of a very welcome commentary with the director and much of the cast (including Guttenberg) and we also get a behind the scenes doc.  Not too shabby at all.

I remember this being one of my favourite movies when growing up.  I watched it on VHS and subsequently on TV and picked it up on DVD, so naturally I was going to get the Blu-ray when it came out.  Telling the story of wise-cracking truck driver Jack Burton (Kurt Russell) who during a stop off at San Francisco China Town re-acquaints himself with old friend Wang (Dennis Dun).  Wang informs Jack that he’s meeting his new girlfriend at the airport.  However on going to collect her the duo witness a kidnapping and soon, along with the help of plucky reporter Gracie Law (Kim Cattrall – Mannequin, Sex & The City) head into the Chinese underworld on a rescue mission.

This is an immediately fun, fast paced, albeit very 80’s experience.  Kurt Russell is on fine form; a little more bumbling than some of his other roles but it works a charm as the fish out of water in a whole heap of trouble.  Dunn, the actor who really should have become a bigger name than he did pretty much steals it though and Catrall is particularly beautiful, spunky and proves great support.  Directed by John Carpenter (Halloween, The Thing) this genre entry overflows with ideas, is a love letter to Hong Kong action movies with heavy influence from Shaw Brothers Kung Fu and more mystical fair like Tsui Hark’s Zu: Warriors Of The Magic Mountain, and it’s clear everyone involved must have had a ball making it.  Add to this Carpenter’s excellent guitar-synth score and well, this is a movie that just bleeds fun.

It’s all very cheesy, the dialogue and some of the jokes are as corny as it gets and some of the action in my opinion could have been shot better – and well, the pace is exhausting, where I was wishing the breaks were applied occasionally.  Yet with a great villain (genre favourite James Hong – Blade Runner, Wayne’s World 2) and some still great looking effects work … I got a kick out of watching this again.

The Blu-ray from Arrow Video is once again an above average treatment for a classic movie.  Detail on a whole is high even if the slightly smudgy look of the era is retained.  Faces and sets all display a depth with decent shadow detail and good clarity.  The re-mastered DTS HD Master Audio soundtrack may not make much use of the surrounds but the bass-heavy score is effectively delivered and dialogue is crisp throughout.  Extras-wise we get a pretty exhaustive selection with several interviews from cast and crew as well as a vintage featurette, music video, galleries, an extended ending and a feature-length commentary.  Add to this Arrow’s inclusion of a detailed booklet written by John Kenneth Muir, and this rounds off an impressive treatment for a still very enjoyable movie.