The previous entry in this popular and heavily hyped saga woke itself up out of the doldrums with a shock twist.  Now stop reading if you’re worried about spoilers for the previous movies as this can’t be helped.  Peeta had been brainwashed by President Snow and sent to kill our hero, the reluctant face of the rebellion, Katnis Everdeen.  Thankfully he didn’t succeed or we’d have no movie.  However this set up the final entry in this series perfectly, even if I mostly came away feeling deflated by a saga that had never quite reached its potential – until now.  This is without a doubt the best entry in the series and is skilfully, confidently directed as the rebels rage war against the capital.  Moving away from some of the more camp aspects of the story and instead focusing on a near-suicidal assault on a totalitarian government, this time around the stakes are higher and the tension cranked up to boiling point. 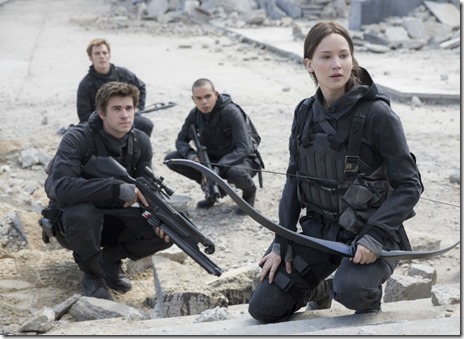 Jennifer Lawrence is excellent as Everdeen and this time around her troubled relationship with Josh Hutcherson’s Peeta is much more convincing and surprisingly really makes this movie.  You also get the feeling that after the surely expected backlash to the third unnecessarily cash-cow where the final book was predictably split in half, all involved had to finally take their meal ticket seriously for fear it being laughed at like Twilight.  Almost everyone here looks like they really mean it (but Luke Hemsworth remains bland).  Donald Sutherland who had previously been a rather limp villain, actually gets to do some acting.  Add to this some excellently realised action (with a claustrophobic, Aliens-esque sewer sequence) and gorgeous cinematography of often war- 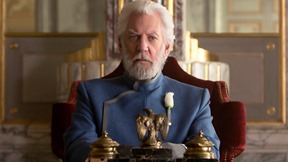 torn vistas aided by superb effects – and I couldn’t believe how much I enjoyed this, considering my expectations had been dialled back considerably.  Julianne Moore gets a much more meaty roll this time around, but I’d have liked a bit more from Woody Harrelson, even if Philip Seymour Hoffman’s subdued appearance is understandable (he died during filming).

It suffers a little predictability, and that final scene is a bit too saccharine sweet.  Yet The Hunger Games as a saga always held promise, although each movie seemed to lack that something special.  With well-timed twists, strong performances, quality action and a perfectly judged epic tone – this finally proves the series (almost) worthy of such massive hype.

Few can argue the versatility and sheer talent of actress Julianne Moore who I think has come on leaps and bounds over the years to become the new Meryl Streep or Helen Mirren.  This award winning drama could also be the pinnacle of her career so far. 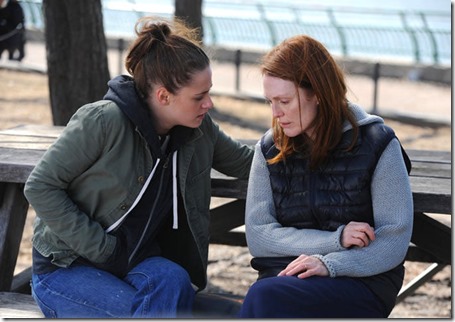 Moore plays Alice, a college professor who is diagnosed with early Alzheimer’s disease, a rare onset of the illness considering she’s only 50.  With her husband and two daughters around for support we watch as the symptoms gradually get worse and worse and she struggles to cope in her life as the person she’s always been gradually slips away.  It’s a hard hitting subject make no mistake, and is portrayed well if you know anything about the disease.  My mother used to work with elderly patients suffering from the disease so as I watched the film with her she marvelled at how accurate it all was.  Moore is simply amazing and heart-breaking, expressing every little detail of frustration and bewilderment as she starts to forget things or lose track of what she’s doing or where she is.   Alec Baldwin is decent as her husband but the casting of two of the blandest actresses currently working (Kate Bosworth and Kristen Stewart) as Alice’s daughters let’s the side down somewhat as they struggle to convey such strong emotions on expression-free, personality-free faces.  Honestly, does Stewart only have one look no matter what she is saying?

Above all else though this is Julianne Moore’s gig and she’s every bit worthy of those Oscar and Golden Globe nods.  The movie portrays a very cruel disease intelligently, finding room for humour amongst the despair and I came away surprised at how much the story moved me.

So we reach the third entry in the heavily hyped franchise adaptation of Suzanne Collins’ popular novels.  Katnis Everdeen (Jennifer Lawrence) has defied the capital and angered President Snow (Donald Sutherland) and has had to go into hiding along with a group of rebels in the hope of gathering the population of Pan Am against it’s totalitarian government.  An uprising of monstrous proportions is on the horizon.  And so ended the last movie, Catching Fire, in the hope that now things were really going to kick off. 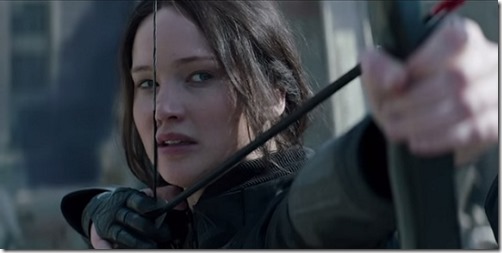 Well, that’s not quite the case here in the first part of the final book, as Katnis is given the task of becoming the Mocking Jay, the iconic face of the rebellion. This of course means she is an enemy of the capital and anyone who joins her cause are immediate targets.  What you get is over an hour of propaganda creating interviews, visiting districts, doing publicity videos, and not much action … until the final act that is.  It suffers the same slow, drawn-out build up of the last movie but without the exhilarating pay-off of an actual Hunger Games this time around to get all worked up about.  And don’t get me started about how many people die for no good reason in this movie (i.e. the hospital being bombed…).

Sound design and production values are both top notch but this doesn’t make up for such lacklustre plotting.  Lawrence does her best in a role that gives her very little to do other than look earnestly at destroyed landscapes and well, act a bit out of her depth.  Supporting turns from Julianne Moore and the late Philip Seymour Hoffman don’t add a great deal to proceedings, and Woody Harrelson is woefully under-used.  Donald Sutherland is ok but again doesn’t get much time to really chew the scenery – the script clearly too interested in dragging out every little moment for as long as possible, just so there’s enough material left to make another movie.

A serious example of cash-in over quality this time, sadly.

I’ll generally watch anything directed by David Cronenberg, that former horror auteur responsible for such titles as Scanners, The Fly, as well as thrillers like A History Of Violence and Eastern Promises.  Going into this I felt echoes of another David’s work, namely David Lynch especially with his dark-side-of-Hollywood opus Mulholland Drive. 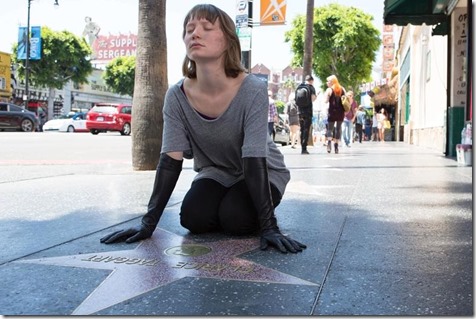 A physically and emotionally scarred young woman, Agatha (Mia Wasikowska) arrives off a coach seemingly intent on discovering Hollywood and befriends a chauffer (Robert Pattinson).  Soon she is hired by struggling former star Havana (Julianne Moore) as her personal assistant.  Havana is trying to land the role in a remake of her deceased mother’s most famous film, whilst at the same time struggling with her own personal demons.  We also get a child actor with over-barring parents (including a self-help guru John Cusack).

Think ‘The Player’ meets ‘Mulholland and you’ll get an idea of this dark but interesting drama.  Wasikowska is, as always excellent as the troubled and manipulative Agatha and Moore is daring and tragic playing an actress way past her sell by date.  It perfectly showcases how fake and artificial the movie industry can be, and especially how throwaway it is with young and ageing actors.  Cusack, one of my favourites is fairly wasted here not getting much chance to be anything more than a money hungry scumbag, and the kid playing the child actor is quite unlikable also.  Well, all the characters here are unlikable, but that’s clearly the point.  Cronenberg observes them like insects waiting to be trod on, but the occasional lapses into surrealism and brutal violence (death by academy award?) or explicit sex (gotta hand it to Moore … she’s fearless!) at least livened up what is otherwise a fairly downbeat and depressing tale.  For Cronenberg this was fascinating but ultimately quite limp for such a provocative and challenging film maker.

Liam Neeson has become quite the go-to guy for action thriller’s of late, following his superb turn in ‘Taken’.  We won’t mention the sequel… So I generally find sitting down to his latest hard-as-nails agent in a difficult situation thriller an easy prospect.  He plays a U.S. Air Marshall boarding a plane as the hired security.  All seems well until he receives a text from a fellow passenger saying someone on the plane will be killed every twenty minutes, unless $150 million is transferred into an account. 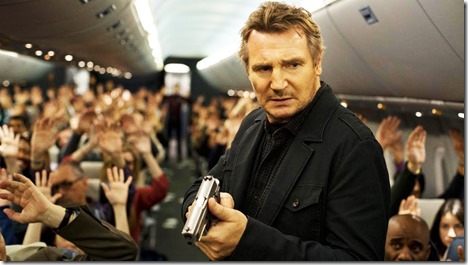 A good concept and a claustrophobic setting make for a very interesting twist on the usual terrorist plot-device.  Neeson is great as always, and the fact the terrorist makes Neeson look like he’s the guy hi-jacking the plane adds bags of tension.  Along the way various suspects turn up for who the texter may be and you’ll surely have your theories, which makes for fun guess-who shenanigans as Neeson tries every trick in the book to unmasks his tormentor.  Julianne Moore plays a passenger Neeson befriends but adds little considering her name, and much of the supporting cast, the pilot, various passengers etc just make up the numbers.  So have no doubt this is Neeson’s gig all the way.

Towards the end the final unmasking felt a little ‘er.. what?’ with the motives somewhat confusing, but throughout there was enough tension and red herrings thrown about to keep this viewer gripped.  Neeson may still be trying to reclaim the brilliance of Taken, and this still falls short, but overall I came away suitably entertained.