When a plane disaster kills Stephanie’s (Blake Lively) family, the government make out it was an accident. However when an ex-MI6 agent appears with information that suggests it was terrorism instead, Stephanie vows revenge. A quick glance online, this hasn’t had the most positive buzz, which is curious as overall I found it an enjoyably gritty thriller with a strong lead performance. Yes it’s a tad derivative of similar movies like French classic La Femme Nikita. Even though it lacks the style of a Luc Besson movies. This still delivers a semi-realistic experience with Jude Law on hand as another former agent who helps Lively become an Assassin.

Lively’s performance definitely has echoes of Noomi Rapace’s turn as Lisbeth Salander from The Girl With The Dragon Tattoo, especially the down-trodden, self-destructive characteristics, and proved quite believable. The movie lacked a bit of exposition with the plane crash not being shown and the why ‘s and wherefor’s behind what really happened rather unclear. At time’s the cinematography lacked style also, with an overly murky atmosphere despite some glamorous locations. That being said one car chase and a fight do stand out. Jude Law also proves an enjoyably tough-talking mentor.

Apart from Stephanie’s motivation for revenge, why Jude Law or those that aid Stephanie turn to her in particular is anyone’s guess – considering she has no underlying skills to build on to make her an ideal assassin-type. It’s like the filmmakers really wanted to make a ‘girl with a gun thriller’, and didn’t concern themselves with the details. I’m guessing the book this is based on fairs better. Yet nit-picks aside this was still effective in places and Lively was decent.

Some people would have you believe that this isn’t another blockbuster entry in the ever popular Marvel Cinematic Universe and a precursor to the much anticipated Avengers: Endgame … but instead some overly political, misguided feminist propaganda effort. Thankfully i’m here to tell you, this isn’t that movie – unless you want it to be. 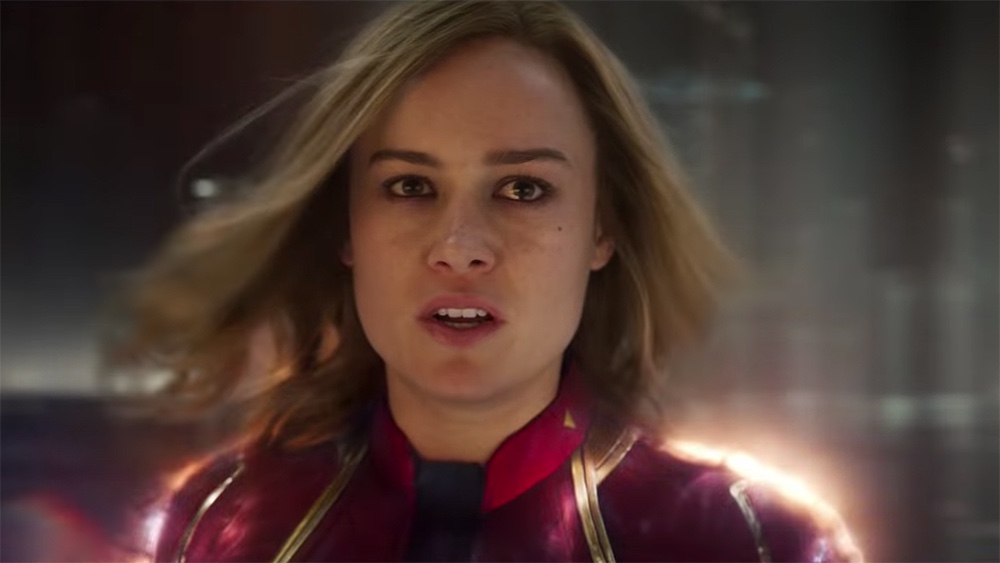 Brie Larson plays Veers, a gutsy soldier under the mentor-ship of Jude Law who along with a squad of Inter-galactic warriors are out to stop a race of warlords from tracking down a scientist on earth who may have invented a light speed transportation device. However once on earth, Veers finds herself plagued by memories of a past she doesn’t recognise.

Larson is likeable, tough, well cast and I guess, makes for great female role model material (whilst not bashing you over the head with the fact). Add to this her teaming with a (incredibly) CGI-rejuvenated Samuel L Jackson for a fun buddy pairing; this has action, a twisting story line that kept me glued and a fun 90’s backdrop with many enjoyable in-jokes and references. The plot at its core is cliched I’ll admit and despite a few unexpected moments, nothing all that memorable, yet ties in well with other movies. A few moments here and there felt slightly rushed also. However, effects work is top notch as usual and although big action set-pieces are spread a little thin, the use of some great 90’s tunes from bands such as Nirvana, No Doubt and Garbage enhance several scenes, making for a fun experience from start to a particularly feel-good finish.

So leave all that political bullshit at the door and if you’re anything like me, you’ll have a good time. Roll on Endgame.

I have to admit I quite like Melissa McCarthy.  I thought she was hilarious in Bridesmaids and followed her star-making turn well with the amiable Identity Thief.  She’s not just funny either, she’s likable.  So her latest venture has her as a desk clerk who is the eyes and ears for her man on the ground Jude Law; a highly skilled spy with more than a passing Bond complex (with a bit more cheese…).  However said spy goes missing and soon McCarthy gets her chance to go on a mission of her own, and maybe finally prove her worth to the CIA. 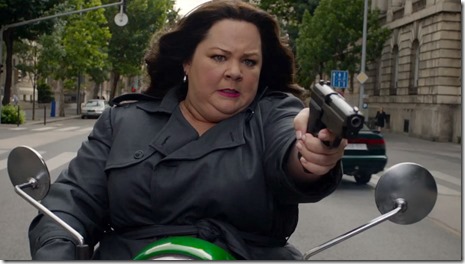 Typical fish-out-of-water stuff granted but given no end of personality by the ever enjoyable McCarthy who throws herself (sometimes literally) into the task of tracking down bad guys and seeing off the advances of a lecherous side-kick.  At the same time she has gung-ho rival agent Jason Statham to deal with (more full of shit than full of action), and also on hand is Brit comedienne Miranda Hart … whose inclusion threatens to ruin everything because well, she is just not funny.  I don’t get her popular but cringy brand of ‘posh/awkward’.  I just don’t.  Also a cameo by rapper 50 Cent feels like he’s wondered off a music video onto the wrong set.

It’s a movie of two halves for sure … the first plodding getting to know the main character, sympathise as she swoons over Jude Law and dreams of better things … stuff.  Not that interesting but gets a lot more fun once McCarthy gets caught up with villains, bombs and globe trotting, whilst kicking ass, donning disguises and being involved in chases.  Rose Byrne is very good too as the lead bad-girl megalomaniac (and those legs!) but a rather predictable, clichéd plot and a reliance on annoying supporting characters stops Spy reaching it’s full potential.

I enjoyed this, but better use of it’s cast and a sharper script could have made for a more memorable experience.  As a McCarthy vehicle however, this did it’s job.

On initial release, the big draw of this was that it was to be the final film of Director Steven Soderberg’s prolific career.  Now I wouldn’t say I’m either an admirer or dislike the movies of this acclaimed filmmaker, having enjoyed the likes of Traffic, Haywire but rarely totally loving his style, which is normally fly on the wall realism with a shimmer of Hollywood style.  He attracts big names to many of his movies, but often sticks with a set group of actors – and this is no different. 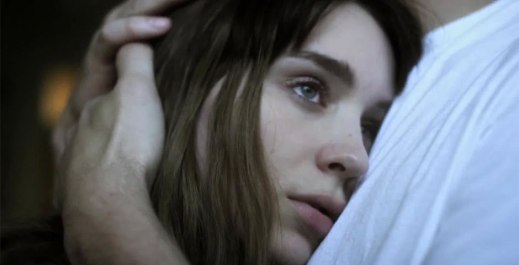 Jude Law is a psychiatrist who stumbles upon the case of depressive young woman, Emily (Rooney Mara) who having just attempted suicide by driving her car into a wall – he agrees to treat her.  After being recommended a new drug by a work colleague, a fellow psychiatrist played by Catherine Zeta Jones, Law’s treatment of Emily soon takes a turn for the worse when unexpected side effects become apparent.

Good to see Mara in a more interesting and absorbing role than that of the disappointing remake of The Girl With The Dragon Tattoo, with this complex character suiting her better, making for a promising young actress.  Jude Law is a personal favorite of mine and think he gets better with age, and here he is very good as a doctor in a difficult situation.  Less appealing is the normally enjoyable Zeta Jones who apart from clearly looking like she’s had some work done, just doesn’t suit the rather manipulative turn she presents here, but was still kind of sexy.  Soderberg’s swansong may lack the multi-layered complexity of some of his other work, but is a more than worthy end to an acclaimed career, with enough twists and turns to keep this viewer gripped (with one particular heart-in-mouth moment).  However as the subject wasn’t overly appealing, I came away not exactly blown away even when certain unexpected developments were revealed.  Soderberg’s movies have often left me feeling like that, like he could churn this kind of material out in his sleep – and as always it’s cold and clinical, with the odd good moment.  I won’t say some of the things here didn’t get me thinking, they certainly did … just not enough.

It sounds harsh, and don’t get me wrong he has made some good movies, this included, but he’s never wowed me, so I for one won’t miss his work all that much.   One for fans or anyone who finds the subject intriguing.

Comedy gangster movies can be excellent when done right.  See Guy Ritchie’s Lock, Stock & Two Smoking Barrels as one fine example.  Yet here there seems to be a bit too much surreal humour to completely believe in the situations, and overall it comes off as a bit absurd.  Thankfully however we have a fairly decent cast of British actors to distract us. 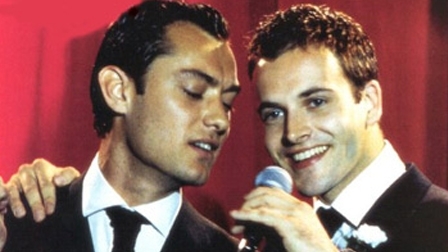 Jonny Lee Miller (Trainspotting, Dexter) plays a wet behind the ears lad who dreams of becoming part of the most notorious gangster ‘crew’ in London, and uses his friendship with Jude Law’s mobster to worm his way in.  The gang, headed by Ray Winstone’s mob boss, are a bunch of typical east end hard men, and Johnny has a lot to prove to be taken seriously as ‘one of the boys’.  So it’s not long before he causes a feud between Ray’s gang and a South London gang headed by Sean Pertwee and also featuring Rhys Ifans.

This is a likable, knock-about movie with some interesting moments and plenty of personality.  What I didn’t take to were the bizarre karaoke bits and Johnny Lee Miller’s to-the-camera anecdotes dressed as a circus clown (?).  I can see that the director(s) were trying to be hip and cool, with some good choices of music and throwing in a few stand out sequences – most notably from Ray Winstone being Ray Winstone, and Rhys Ifans being well, a mad-bastard.  But overall I felt the tone of this was not right … I couldn’t make up my mind if I was meant to find it funny or serious.  So with many other, superior Brit gangster movies in mind, I’m writing this one off as a fail.