I have a funny relationship with comedies (pun not intended).  I’ll admit I may not be the best person to review them, as I tend to take other genres more seriously, but that isn’t to say they don’t have their merits.  This entertaining road-trip of a story has Jason Sudeikis (Horrible Bosses, Hall Pass) as small-time drug dealer David who gets the chance to score big when asked to travel to Mexico and bring back some marijuana for a local big shot.  Being a complete amateur, David hatches the plan to go as a family on holiday in an RV, and ropes in next door neighbour Jennifer Aniston along with the geeky kid from down the hall and the local homeless girl.

A fun concept helped immeasurably by a snappy script with plenty of great lines (which are mostly all taken by the always decent Sudiekis).  That being said, Aniston carries her own by not just strutting her stuff as a hot stripper (daaaamn girl, where’d you get that body?) but also having some great moments herself (punching Scottie P!!!), aided well by Son Of Rambow’s Will Poulter and hey, isn’t that Julia Roberts’ niece?? However it’s gags don’t quite have the outrageous sucker punch of more juvenile comedies like the aforementioned Hall Pass and even the Harold & Kumar movies (see, my limited viewing history?), and that villain was more of an after-thought I’m guessing.  It also gets rather predictable towards the end.

Still, this had personality to spare and a good enough cast to carry this viewer through to the end with a smile (and those out-takes are great).

When first hearing about this movie, the classic Dolly Parton movie / song Nine To Five came to mind, as it similarly follows the story of three disgruntled employees who plot to kill their bosses.  Jason Sudeikis of Hangover fame, finds his lovable boss Donald Sutherland replaced by son Colin Farrell, who just happens to be a coke snorting womanizing ass****.  Jason Bateman is ruled over by scum bag Kevin Spacey who treats him like crap, and newly engaged Charlie Day is being sexually harassed by Dentist Jennifer Aniston. 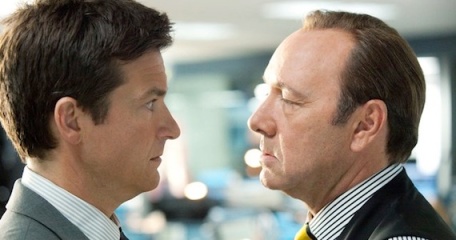 This very funny movie is full of great lines, most of them toilet humour juvenile granted, but with a quality cast that all deliver and increasingly absurd situations (look out for the ‘wet works’ moment), this was a movie that really entertained.  Sudeikis again proves to be one of the more assured comedy talents around, and Bateman also made for a likeable and funny ‘straight man’ amongst the chaos.  A special mention must go to Jennifer Anniston playing against her rom-com stereotype and being ridiculously sexy throughout, and Spacey also makes for a very good villain, even if the part is not exactly a stretch for him.  The script may be a little too reliant on crude gags and colourful language, and some times it gets a bit too silly (with a totally over-the-top Farrell) … but along with a memorable cameo from Jamie Foxx, this ticked many of my boxes.

Fans of movies like The Hangover, Hall Pass etc should be all over this, and for anyone who likes a well written comedy with a quality cast … recommending this one is a no-brainer.

The Farrelly Brothers have gained quite a reputation for crude but usually very well made comedies, starting out with the classic Dumb & Dumber.  Although I haven’t really followed their career that closely, something about this latest effort sparked my interest.  Two married men (Owen Wilson & Jason Sudeikis), with a habit of checking out attractive women in their wives’ presence, are given a hall-pass, a week off from marriage where they can pursue other women whilst their wives are away.  The two men along with their gang of friends (including brit-comedy star Richard Merchant) then attempt to get laid by any means necessary, but soon discover that things have changed, especially themselves since they were younger.

This at first gentle comedy, with a somewhat slow start, soon turns into a very funny and absorbing journey, filled with priceless moments (the girl in the bathroom for example) that although often crude and juvenile, couldn’t help but make this viewer crack up.  Wilson and Sudeikis make for a likable duo, even if Owen’s bent nose distracted me throughout.  Sudeikis though is obviously a talented comedy star.  The wives, including Christina Appelgate are fine too, but are more like pretty set dressing than anything that will steal the limelight from the men.

It doesn’t do anything new for this kind of comedy, but what matters is that it knows how to hit the viewer and surprise them, even when you think you know how things will turn out.  A solid recommendation.