After last year’s Mechanic, I was beginning to feel that a lot of Brit actor Jason Statham’s movies were blurring into one … with not a great deal to tell one from the other.  However on first seeing the trailer to this recent offering, I began to feel that maybe he had stumbled upon something a little deeper.  Statham plays an ex-cop turned cage fighter (!) who whilst in trouble with the Russian mob, stumbles upon the plight of an 11-year-old Chinese girl who has memorized a code and is now the target of both the Russian mob and the Chinese Triads.  Statham soon finds himself in her company and chooses to protect her from the ruthless gangs  – with very explosive results! 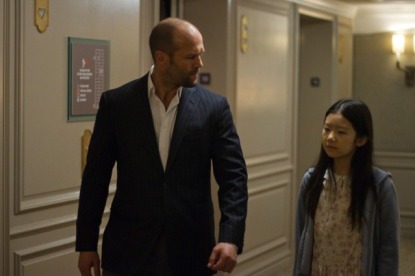 Typically for a Statham movie this is packed with gun fights, martial arts (a tube train fight stands out) and car-chases, all delivered with the foot pressed firmly on the adrenaline pedal.  But with the added depth of the young girl and less wise-cracks, I found myself caring much more for the events of the story this time around.  Director Boaz Yakin has delivered a well made, imaginatively shot movie with the kind of don’t-give-a-damn attitude seen in Liam Neeson actioner Taken.  There is also good support from mostly unknown Reggie Lee and as the young girl, Catherine Chan, amongst other more recognisable faces … making this a cut above the usual, style-heavy thrillers awash on shop shelves these days.

The plot does get a bit complicated towards the end, and a final showdown with an interesting bad-guy is kind of wasted … but this is still one of the best things Jason Statham has appeared in for a long time.

Jason Statham has quickly become the go-to actor for tough guy action roles.  He was arguably the best thing in The Expendables and his The Transporter and Crank franchises are a great deal of fun – and he oozes charisma and screen presence.  So now we have him, not exactly playing against type as a seasoned hard-as-nails hitman who finds himself taking a young hoodlum under his wing and training him to be a professional killer like himself, in this remake of the little known Charles Bronson film.

END_OF_DOCUMENT_TOKEN_TO_BE_REPLACED

Just the idea of this movie was enough to get me excited.  Some of the greatest action stars of the eighties, joined by a few modern action stars, all in the same film?  Where do I buy the ticket?   Now beyond this initial pull, the plot follows tough ass covert mercenaries for hire who are called into assassinate an evil dictator in South America.  Sylvester Stallone catches the eye of a pretty woman though who also happens to be the dictator’s daughter, and soon the mission becomes personal and everybody gets to blow shit up – big time.

END_OF_DOCUMENT_TOKEN_TO_BE_REPLACED

It has to be said, Jason Statham is the finest British export American action movies have ever hired.  I first discovered this charismatic, hard-as-nails actor in Guy Ritchie’s excellent Snatch (a movie the director hasn’t come close to since, and I’ve yet to see Sherlock Holmes).  Yet thinking back to that character seems a world away from the ass-kicking shit-talking granite made hard man we have come to love through the Transporter movies and beyond.

This action-heavy off-shoot from that franchise has Statham as a gun-for-hire who at the very start of the movie has been piosened and discovers he must keep his adrenaline running to stop himself from dying.  So naturally the clock is ticking and he must discover what has happened and find an antidote.  The story is thin, granted, but Statham brings it to life with a very energetic, desperate performance that boarders on comedy at times, but never looses the overall point – that this is a full on, fast paced action fest with plenty of chases, fights, blood, violence, naked women and sex.  It’s a man’s movie.

The supporting characters are little more than caricatures, with a couple of boo hiss villains, a girlfriend (Amy Smart) who beyond being a great piece of ass, is your typical dumb-blonde stereotype, and a cross-dressing side-kick is (mercifully) under-used.  It all gets a bit ludicrous towards the end, but by then you’ll have been deafened by the heavy-metal soundtrack and gasping for breath by the sheer intensity of it all, to not really care.