I admit it, Mary Elizabeth Winstead just does it for me. She always plays cool characters, is a capable actor and exudes a subtle sexiness that’s very appealing. This latest vehicle, playing a character not too dissimilar to one she played in Birds of Prey has her as Kate, a professional assassin who following a hit that goes wrong, discovers she’s been infected with a deadly poison. With about a day to live she races against time to find out the culprit and eliminate them.

Co-starring Woody Harrelson as her mentor, this is very much the female take on John Wick and yes, Winstead is a badass. Set in Tokyo, of course this is stylish, full of neon, fast cars and plenty of gun-fu. Shame then that unlike that Keanu Reeves franchise, the direction here isn’t as slick, and action can occasionally feel stilted, with some uninspired camera work and sloppy editing – add to this an over reliance on (poor) CGI. The plot is still effective if simple, serving up some good twists, and the subplot of a teenage girl who Kate has to reluctantly team up with, proved interesting.

If you like your action fast and colourful, this is still the movie for you. Winstead is great, portraying her pending death well, but much of the plot was quite predictable. Harrelson also is also just ok, clearly capable of delivering this kind of character in his sleep. So no, not quite an action classic, but worth seeing regardless.

I’d heard many good things about legendary Japanese filmmaker Akira Kurosawa over the years, how he had influenced so many directors, his style having defined much of cinema as we know it, from the John Ford Westerns to Sci-Fi sagas like Star Wars. So I thought it high time I sat down to one of his movies, having recently picked up a box set of some of his most famed titles.

This movie from 1958 starts out with a duo of squabbling farmers who stumble upon the plight of a missing Princess and an invading army hellbent on killing her and claiming the kingdom for themselves. Initially hoping to turn their fortunes around by finding the Princess and claiming the bounty, the farmers soon find themselves befriending her and her bodyguard – a former General.

This was easy to get into, as I had had some trepidation concerning if I’d like this sort of movie. However the bumbling, squabbling farmers are good fun and the General, played by Kurosawa regular Toshiro Mifune is a likeable yet imposing presence that I was quickly routing for. The actress playing the Princess was also appealing even if her dialogue is limited for the most part. Kurosawa’s direction is decent with a few stand-out sequences including a tense one on one fight, a large scale escape from a fortress involving a ton of extras, and an eye-catching ‘fire festival’ sequence. George Lucas has named this as an influence on Star Wars, yet apart from his similarity between the farmers and R2D2 and C3PO, that’s where I felt comparisons ended.

It’s a tad long at 138 minutes, and isn’t as eventful as it could have been, with much of the running time taken up by the (admittedly enjoyable) banter between the four main characters. It’s also unclear who the invading army are (the mongols?) and what the setting is. Yet for my first foray into the movies of Akira Kurosawa, I still got a lot out of this, enough to make me thirsty for more.

The Blu-Ray from the BFI box set I picked up has a very pleasing, clear B&W image that’s quite eye-catching at times. Subtitles are also well done and easy to follow. Sound is effective, with clear dialogue and a pounding score despite being in standard stereo. Extras are a let down though, with only an interview with George Lucas and a trailer. There’s also strangely no scene selection.

Following the mysterious deaths of a group of students, a rookie female reporter investigates links to an urban legend revolving around a cursed video tape. The movie that started it all. An international sensation that spawned several sequels as well as an American remake. So how does this 1998 original hold up? Well, what Japanese horror does well and this does equally well is that ‘unsettling stillness’. Dark Water, by same director Hideo Nakata, avoids clichéd jump scares or gore, favouring gradual menace this movie cemented and made a genre all its own. Add influences from traditional Japanese folklore, and traditional detective stories as well as Japanese ghost stories spawned what we now know as J-horror. 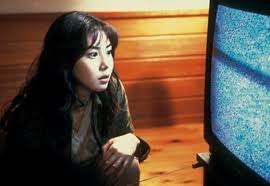 More an eerie drama than full-on scare-fest, this feels rather lightweight despite its reputation, even though that slow burning ticking clock plot device helps deliver a sense of dread that makes that famed, often satirised and copied ending all the more powerful. However, performances are largely only passable and often overly theatrical.  Thankfully, Nakata’s direction is restrained but suitably creepy, helped by a great sense of unease if avoiding full on chills mostly., and that incredibly effective, freaky soundtrack does crank up the horror.  Yet overall, this is rather dated today and the plot doesn’t make much sense, leaving many questions unanswered.  A girl trapped in a well, a curse, deaths but er… how does that connect to videotapes? It seems to me like a convenient plot device.  It’s also  to me this was a clear influence on recent cult hit ‘It Follows’ amongst other movies.

The new 4k restoration from Arrow Video boasts a decent picture with effective sound treatment in DTS HD master audio 5.1. The movie is rather stilted and bland to look at yet this only adds to it’s atmosphere. Extras consist of a fascinating commentary from film historian David Kalat. We also get a complete version of the cursed video (date you watch it?) and several worthwhile featurettes.  There are also trailers and a photo gallery. Decent treatment for a classic that whilst diluted by modern standards, still deserves its place in horror movie history.  And yes, I prefer it over its Hollywood remake.

When news reached me that beloved Japanese animation house Studio Ghibli were closing their doors, I was concerned that the type of movies seemingly unique to that studio, would never see the light of day again.  Thankfully that concerned was quashed on hearing about this release from new studio  ‘Studio Ponoc’ and directed by Ghibli stalwart Hiromasa Yonebayashi.  Based on the children’s book ‘The Little Broomstick’ by author Mary Stewart, we have Mary, a spirited young girl who stumbles upon an enchanted broomstick one day after wondering into a misty forest.  Soon she is transported to another world, a school for witchcraft not dissimilar to Hogwarts, where the colourful characters may be hiding a secret linked to a sacred flower.

This is where the movie revealed an identity crisis, that lingered throughout.  Despite best intentions and a charming veneer of wonder and imagination with top-notch hand-drawn animation … echoes of the movie’s heritage and titles like Spirited Away and Kiki’s Delivery Service meant it all quickly began to feel overly familiar.  No bad thing but the characters whilst interesting to look at and with some typically bonkers design … lacked personality.  Apart from Mary herself, an endearing yet clichéd character for this type of movie … the villains and various side characters just came off as typical, with the villain’s scheme also not fully explored.

Yet a twist towards the end was welcome and brought the story full circle in a particularly satisfying way and add some fun action and plenty of energy – I still found a lot to enjoy.  Ghibli-lite, but as (hopefully) the start of a new era for Japanese animation, this is a promising start.

I’m certainly a fan of Korean cinema.  Over the years I’ve discovered some real gems and found myself liking certain directors and actors the more I see their movies.  This critically acclaimed thriller follows Police captain Lee Jung‑Chool (Kang Ho-song) who infiltrates a group of resistance fighters who are reportedly planning a series of bombings on Japanese establishments during the Japanese occupation of Korea in the 1920s.  As a Korean born man, Lee Jung finds himself questioning his allegiance when a charismatic resistance fighter befriends him and lets him in on their plans.

This tale of loyalty, double crosses and war time espionage is shot with no end of style and class.  The set design and photography here is simply breath-taking and further cements director Kim Jee-woon (I Saw the Devil) as one of the best the country has to offer.  Although at times overly-complicated, this was at times gripping with some brilliantly executed set-pieces including a tense sequence aboard a train and an exhilarating finally set to the music of Maurice Ravel’s Bolero.  Add to this two strong turns from Kang-Ho Song (Sympathy for Mr Vengeance, The Host) and Gong Yoo (Train to Busan) and even though occasional shoot-outs got a tad repetitive … it was the battle of wits at the centre of the story that came across strongest.

Not one of those Korean movies I’d leap to recommend over so many others, but if you’re a fan of well-made world cinema, this is still worth your time.