As a movie fan I have stumbled upon the general infamy of the low budget cult movie ‘The Room’ and the absurd celebrity status of it’s director and star Tommy Wiseau. However the attention such an ill-conceived endeavour has garnered has me somewhat puzzling, but not overly surprised when these days we give a spot light to some of the biggest idiots on the planet and help them become celebrities.  However when I heard the rave reviews this tongue-in-cheek dramatisation of the true story behind said film had been getting … I’ll admit I was curious.

James Franco plays Tommy Wiseau and his younger brother Dave Franco plays Greg Sestero, two hapless wannabe actors chasing the Hollywood dream.  Despite a rather oddball personality, Greg is drawn to Tommy following a rather unconventional acting class routine, and soon an uneasy friendship is formed.  Tommy is a mystery, keeps his age and where he originates a secret but is able to put his hand to seemingly endless funds, especially once the two decide to make a movie following little to no luck landing an acting job.  As a snapshot of indie film-making and the acting scene in Hollywood, I was fascinated even if we’re following two guys who probably need to consider totally different career paths.  Wiseau is unhinged and a bit creepy but played well by Franco who is doing a spot on performance of a very strange person.  Dave proves the likable lead for the audience to anchor themselves to and I ended up sympathising with Greg much more than Wiseau.  Yet ultimately this is cringy and bizarre, just like the man it portrays and the movie that came out of the experience, with little to say other than being rubbish at something can still make you famous.

There’s more fun here spotting the various celebrity cameos than what’s actually going on, and you do wonder what the point is other than seeing two guys spectacularly make utter shite.  Is it fun watch?  Definitely.  Is it a story that needed to be told?  Not really.

Starring the always enjoyable Amanda Seyfied (Mama Mia, Les Miserables) as the title star, this 70s set story of one woman’s brush with fame in a seedy, exploitative business was entertaining even if personally I had little knowledge of the real-life person being portrayed other than the legendary status of the movie ‘Deep Throat’.  Much has been documented and spoken about regarding that movie, along with the documentary ‘Inside Deep Throat’ which I never actually saw.  Yeah I’ll admit to seeing a few porn movies, what guy hasn’t and am a big fan of the movie Boogie Nights which explores the same industry and period.  Yet this is more a warts and all movie and shy’s away from much of the sex and titillation (bar some nudity) to focus on a woman clearly in with the wrong crowd, or more accurately the wrong man.  Co-starring an unrecognisable Sharon Stone as Lovelace’s strict mother and even James Franco appearing as Playboy millionaire Hugh Hefner – there’s certainly plenty going on here, and the acting is decent (especially Seyfried).  Yet at the end of the day it’s little more than an abusive relationship tale – playing it safe for the most part.  Sad definitely, but not really anything we haven’t seen on a dozen made-for-TV dramas.

The truth be told Deep Throat and it’s success were probably more fascinating than Linda Lovelace’s story, so perhaps check out the doc, and give this a miss … unless you have a particular interest in the person herself.

I haven’t seen the much admired and  cherished classic The Wizard Of Oz for many years.  Why?  It freaks me out.  Something about it just gets under my skin, and that wicked witch … shudder.  However on hearing this was coming out I at first really wanted to see it, but several very mixed reviews from friends later, let’s just say I hesitated … until now. 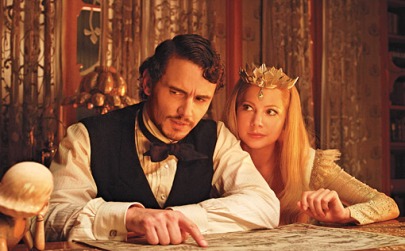 James Franco is Oz, a carnival magician and conman who after one too many deceits finds himself running away from his troubles in a hot air balloon, only to get caught in a tornado, which subsequently whisks him away to the land of Oz.  This little prologue like the 1939 original is shown in black and white (and even in classic 4:3 ratio) until Oz arrives in the magical world and then its all bold colors and CGI.  Now in this modern age, we should have one wish when being presented with a new vision for the land of Oz, and that is ‘wonder’ … we want this enchanted world to be realized like never before, and rest assured folks we get what we wished for, with some gorgeous, eye-popping visuals, grand set design, very impressive CGI and color – oh the color!

Joining Oz on this trip down cinematic memory lane is current hot property Mila Kunis (looking great in leather pants) as good witch Theodora, along with her sisters Evanora (Rachel Weiss) and Glinda (Michelle Williams).  Performances are good, especially from Weiss in possibly her first villainous role, and with a story that offers enough nods to the original whilst throwing in some great ideas of its own (good flying monkey ‘Finley’ and an impressively done china doll) this proved very entertaining.  For an Oz movie however this lives or (slightly) dies on just how wicked the Wicked Witch is, and sadly here she may look the part (she’s green, has a pointy hat and rides a broom stick) but performance-wise, she comes off as a spoiled brat having a tantrum.  And yes it may be aimed at a family crowd, but the Wicked Witch is meant to be scary!  Add to this the absence of songs (surely another lasting memory of the original) and a hero who is basically a bit of a git, and yes, it does have a few problems.

Yet Franco and the rest of the cast give it their all and under the watchful eye of director Sam Raimi (Spiderman, Evil Dead) the sheer infectious energy and visual explosion on display makes such short comings mostly forgivable.  Whilst not quite Judy Garland’s Oz, its still the same, magical experience.

Now this was a unique visit to my local multiplex!  The movie starts … large, brash colored letters for the title, then a big, loud montage of spring break, complete with ample close-ups of breasts, girls in bikinis  more breasts, pert bottoms, drunk guys spraying water on, yes you guessed it, more breasts – and the tone of this particular movie had been set.  Now I am no prude, but when in a fairly occupied theater, ogling some bouncing boobies actually made me feel a bit of a perv.  So thankfully there is a bit more to this than tits and ass (almost).

Squeaky clean TV favorite Selena Gomez is part of a clique of girls dreaming of joining everyone on some resort in Florida for Spring Break.  Only trouble is they don’t have enough money.  So do these girls get a summer job to pay for it?  No, how about holding up a diner wearing balaclavas and using water pistols?  Job done!  This is a pop-video on steroids kind of viewing experience, filled to overflowing with rapid editing, experimental camera work, video-effects and loud pounding dance music that has no actual tune other than thump thump thump.  Directed by relatively unknown Harmony Korine this feels more like an extended YouTube montage than a movie, loving to repeat lines, sounds, images etc to the point of nausea   Acting-wise the young cast of pretty-little-things (including Vanessa Hudgens) did a good job with limited material, and current hot-property James Franco made a memorable appearance as a blinged-out Gangsta-rapper who gets involved with the girls and leads them steadily off the rails.

I think what this movie was going for was the tried and tested ‘innocence shattered’ message with all the free-loving excess brought down to earth with a bump.  Only problem was it took a very long time to get there, and even from this male perspective, all that flesh got boring very quickly.  I think there might be a very interesting movie hidden away in there somewhere  and some of the imagery, use of songs to convey the ideas was fairly well done – just a shame the movie cared little about such things, in favor of another tit shot.

The 1968 Charlton Heston movie that spawned several sequels as well as a television series, is rightly regarded as a classic, and although a re-imagining by Tim Burton a few years ago attempted to breathe new life into an old idea, the franchise that had once been Box Office gold seemed dead and buried.  Until now.  With a take on the story from a fresh perspective, director Rupert Wyatt has done the unthinkable – made Planet Of The Apes relevent again.