The Rise Of Skywalker

If this wasn’t my most anticipated movie of the year, I don’t know what was. I struggled with the last entry, The Last Jedi a movie that with subsequent viewings has gone up in my appreciation but remains highly uneven. This final movie though and the conclusion of the Skywalker saga brings forth the return of a long suspected dead enemy … The Emperor! With a new threat to the galaxy, Rey and her friends intend to seek out and destroy him once and for all, whilst conflicted Kylo Ren intends to turn to him for guidance as the new supreme leader of the First Order.

I’ll admit this storyline comes a little out of nowhere and is a blatant attempt to steady the ship following some of Rian Johnson’s ill-conceived plot twists in Last Jedi … but the return of Ian McDiarmid‘s Emperor Palpetine was welcome and the ageing actor nails the necessary maniacal menace. The immediacy of the threat propelled the action from the off as we’re treated to some great battle sequences, mixed with solid character moments that showcase the chemistry this new cast still has. The psychic bond between Daisy Ridley‘s Rey and Adam Driver‘s Kylo-Ren turns out to be the big focus and is further explored and the movie used it in several creative ways. It proves the best aspect and is surrounded by many highly entertaining scenes including a plot thread involving C3P0 losing his memory and some (thankfully) well-timed humour as well as a perfect tone that took me right back to how it felt seeing Star Wars as a kid.

If I had to nitpick it would be the obviously forced Emperor plot, and the first act overly frantic. And like all Star Wars movies it has some silly bits, and there’s a couple of jarring character moments (General Hux!?!). Yet in the grand scheme of things it’s so damn enjoyable, such gripes can be forgiven. As a story that has spanned over 40 years, this felt like a fitting conclusion and ticked many of my boxes. There was a lot riding on this final movie and the conclusion of such a long running saga. There’s not a great deal here that makes this trilogy a story that had to be told other than to reintroduce Star Wars to a new generation and make up for the failings of the prequel trilogy. Yet with highly memorable characters, some great moments (and some questionable ones) I feel this has still been a worthwhile endeavour for the filmmakers and as a fan I am overall satisfied with what they achieved.

During an on-going expedition into deep space, the crew of the Starship Enterprise arrive on a colonized ‘city planet’ where they stumble upon the plight of a female alien who requests help to journey to an uncharted planet to rescue her stranded crew mates.  However once there Captain James T Kirk (Chris Pine) and his crew discover a powerful enemy. 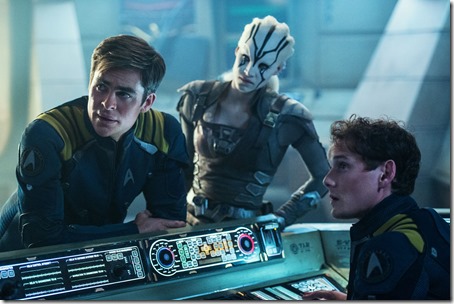 The creators of this newly rebooted franchise in the Star Trek universe have indeed done a great deal right … the casting alone is excellent with actors not only doing fine impressions of the earlier incarnations, but also bringing their own personality to the characters.  I got a serious kick out of the last two movies, so it’s with a (slight) heavy heart that I found this one left me wanting.  That’s not to say it isn’t good – at times very good, with some spectacular action and again great chemistry between the main actors, something that made those old movies so watchable in the first place.  However three movies into this new era, we find the writing getting a little lazy with a generic villain once again going all megalomaniac after being wronged by the federation (er…we get it, the federation are assholes).  All that stuff with the artefact got a tad confusing at times also.  Heavily advertised bad-ass female warrior ‘Jaylah‘ who despite looking cool, also has very little depth and really, pluck her out of the movie, would the experience be any worse off?  Someone like that should have been pivotal, not disposable to the plot.

Yet what remains is a couple of hours of fast-paced, action packed, fun entertainment.  Justin Lin’s direction perhaps lacks the ‘class’ of J J Abrams … but doesn’t detract from great casting and some fun nods to yesteryear and nice in-jokes.  Chris Pine is the perfect new Kirk and suitably supported by Zackary Quinto’s Spock and Simon Pegg’s Scotty is also excellent, not that there’s a bum note amongst the ‘crew’.  However Idris Elba’s bitter ‘Krall’ is one-note and doesn’t get all that interesting until the end and even then its a bit deja-vu.  With that said, as a Trek fan I still enjoyed this, but it’s clear to me the franchise should be taking a few risks by now, especially if it wants that ‘Beyond’ in the title to be anything more that a good name for a sequel.

I really liked Cloverfield, one of those hand-held shaky cam movies that are like marmite to some people … it was a tense, thrilling take on ye-old alien invasion plot and the prospect of a sequel although not something I expected, certainly appealed.  Then I was to learn that this movie bares very little resemblance or connection to that movie other than the word Cloverfield. So I suppose I went into this not really knowing what to expect.

Mary Elizabeth Winstead (Scott Pilgrim Vs The World) plays a woman seemingly running out on her boyfriend, but on route to wherever, is involved in a car crash – and soon wakes up in an underground bunker under the watchful eye of John Goodman’s ‘Howard’.  Howard’s a bit creepy though and fears she’s been kidnapped come immediately to mind until he starts saying the world has become contaminated and some sort of incident has occurred on the surface.

I liked this set up.  Claustrophobic, with just these characters for company.  Helped then that we get some strong performances, especially Goodman who drifts unnervingly between creepy, likeable and psychotic, leaving this viewer constantly trying to figure out his agenda.  Winstead is also very good and rather resourceful as a woman who clearly knows how to make the best of a bad situation.  However the movie stumbles a little in it’s characterisation … it deliberately vague about who these characters are which proves frustrating, especially as with Goodman you never know what to believe.  Also where the movie ends up going is particularly predictable even if the final scene proves quite thrilling.

Overall I had a good time with this.  It threw in some surprises (especially a bit involving a barrel), I enjoyed watching things play out and the tension was pretty thick at times.  I still have no clue what’s the significance of the word Cloverfield is though.

So much will already have been said, written and tweeted regarding this much hyped and highly anticipated seventh episode in the once beloved saga, that my opinion will matter little … but hear me out because to say I have been looking forward to this movie all year, is an understatement.  It’s one of those movies that surely can’t meet the giddy expectations I and many others have bestowed upon it or recapture that wonder and magic I felt on seeing the classic trilogy as a child.  Or can it? 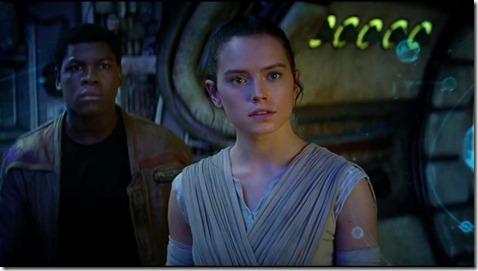 The story follows primarily two characters, that of storm trooper Fin (John Boyega) who has a moment of uncertainty that causes him to flee the first order (the new evil villains in place of the empire), and that of scavenger farm girl Rey (Daisy Ridley – a fantastic find).  The two unwittingly get thrown together and stumble upon wonderfully cute and attitude-filled droid, bb-8 who has a map that could lead to an in-hiding Luke Skywalker’s location.  New bad guy Kylo Ren is searching for him to prevent any possibility of the Jedi’s turning up and wrecking his plans for galactic domination.  Along the way the two would-be heroes find help from two familiar faces, namely Han Solo (Harrison Ford) and Chewbacca.

Now let it be said this movie plays heavy homage to the original three movies, especially the first 1977 classic, with clever in-jokes, subtle nods and a few plot similarities.  However it also manages to sprinkle the old with many fresh ideas of it’s own and with a script that has clearly been written with genuine care for it’s characters whilst ensuring it all feels like a Star Wars movie, I came away from this very impressed indeed.  New faces Fin & Rey do a perfect job of giving us someone new and interesting to invest our time in whilst leaving them mysterious enough to build on in later sequels.  Han Solo, Chewbacca and (formerly Princess now General) Leia (Carrie Fisher) all feel vital to the plot also, with Han especially helping drive the story alongside his younger co-stars.  Add to this a villain with real depth in the shape of Darth Vader-wannabe Kylo Ren and all the ingredients are in place.  Director J J Abrams has done a stellar job, capturing the correct feel and tone and also filling the movie with spectacular action, yet making sure there was all the depth and believable characterisation that had been (for the most part) missing from the prequels.

I’ll add a few nit picks that are simply that, as this is a movie that does nearly everything right and fixes many issues the prequels (and to an extent) even the original trilogy had – but Supreme Leader Snoke just wasn’t very scary or intimidating and just looked like an out-dated CGI effect (made all the more jarring considering the movie’s otherwise reliance on practical effects).  Also, considering the hype surrounding Kylo Ren’s bad-ass three-pronged light sabre in the trailers; this guy is wielding it every chance he gets (even during a couple of tantrums) and so the build up to him actually using it in a duel is watered down due to over-exposure.  Also the many nods to A New Hope are a bit too blatant at times (and did we really need another death star?).

But … like I said small things in what is easily the best movie in the franchise since The Empire Strikes Back.   The Force truly has awakened.

My recommendation for a Star Wars fix?  Sit down with Empire Strikes Back again … I am you father!!!!!!!!!!!  Oh and keep your fingers crossed for the new Star Wars movies, and that J J Abrams doesn’t mess it up…. the force is strong with that one (hopefully).

I score every movie I see. 5 is generally considered a must watch - but doesn't need to be 'perfect', just fully entertain and maybe surprise me. A score of 3 is considered a good movie - but a bit middle of the road and well, a 1 you should probably avoid like the plague. Ratings are of course subjective so I strongly advise reading through my full review for a complete opinion.

I also occasionally give ratings out of 5 to back-catalogue titles newly released on Blu-ray regarding picture, sound-quality and extras.