I only have vague memories of the original made for tv two parter in the early nineties – but I strongly recall being underwhelmed by the second part. However having liked the first in this re-adaptation, I sat down to this with anticipation and optimism. Twenty seven years after the events of the first movie, following an incident involving a young man as well as several disappearances of various children, it’s time to get the losers club back together in hope of putting an end to that f***ing clown, once and for all. 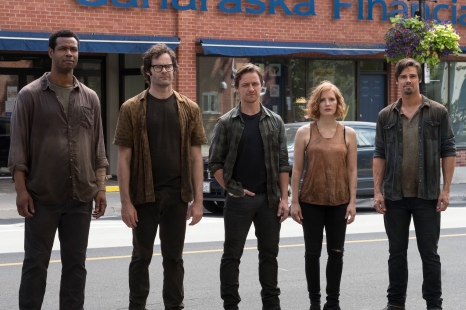 In the hands of the same director and with solid choices made when casting the adult counterparts of the first movie’s young cast, I was quickly drawn into this again. It’s filmed with panache and no end of style. Like last time there is a focus on character that works brilliantly, with a welcome dose of flashbacks to the young cast delving deeper into the gang”s friendship where clearly additional scenes were filmed rather than just copy and pasting from the last movie. It helps build up each individual character and made me care for all of them – very important when Pennywise turns up to deliver a wealth of set piece scares.

It’s here with a reliance on said set pieces that the movie falters, and it quickly dawned on me the approach here was maximum frights instead of gradual menace, meaning some of those scares just aren’t earned. It helps that the set-pieces are often imaginative and visually freaky – there’s just so many of them it does get exhausting. Thankfully performances across the board are great, with names like Jessica Chastain, James McAvoy and especially Bill Hader all delivering.

This may be a sequel that considers bigger is necessarily better … more subtlety and a stronger sense of mood (with a need for about 30 minutes chopped from that run time) would have made this equally as good as the first movie. As it stands, this makes up for such shortcomings by still being solid entertainment that’s well acted and brings the story to a (albeit drawn out) decent enough conclusion.