Every now and then I feel up for a nasty little horror movie and have a pretty strong threshold of what I can endure with movies like Hostel and Saw standing out as good examples of the more extreme side of horror.  However it’s often the case that horror from foreign countries can push that envelope further as witnessed in the disturbing classic Martyrs.  So sitting down to this Turkish entry I was both excited and a little nervous. 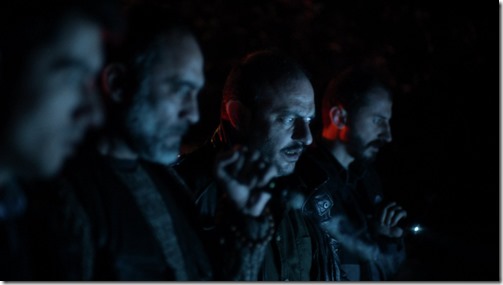 A group of cops, hanging out at a late night restaurant, are called to an emergency at an old, abandoned police station in the middle of nowhere.  So sets up a night of terror, hallucinations and a descent into hell as the cops try to make sense of an increasingly bizarre and freaky situation.  Director Can Evrenol has gone on record as saying he was influenced by the movies of such Italian horror auteurs as Lucio Fulci and Dario Argento, and if like me you’re at all familiar with either director, it’s in full force here; Argento’s decidedly weird colour palettes of blues & reds (and great use of music) … Fulci’s dream-logic narrative and revelling in gore etc.  This is less a movie about story, traditional structure and more about atmosphere, style and freaking out (or repulsing) the viewer.  In such respect it works wonders and jumps in time, dreams and reality whilst at first jarring, soon created a personality all it’s own, and I began to just go with it, awaiting the next nutty development.

This is pretty messed up stuff; satanism, lashings of blood, graphic throat slits, and at the centre of it all the horribly disturbing looking ‘Father’.  I won’t go into any more of what happens but rest assured this one is not for the easily offended or squemish (and it gets pretty sick) but definitely a movie for gore-hounds and those that like their horror to punch them in the face until they can’t take no more.  Yet it could have been scarier, and as there is little reason or logic to anything, I was left not really caring about any of the characters.  With that said, I still applaud the director for nailing a very effective style and delivering an ‘experience’ not easily forgotten.

So how was I going to celebrate Halloween this year?  Well other than some people dressing up at work, a few trick or treaters knocking my door … the easy option was to settle down with a horror movie.  I was recommended this by a friend and it tells the tale of a family man, still mourning the death of his wife who inherits a house from an uncle he never had anything to do with.  Turns out this uncle was into the occult big-time and went about finding and imprisoning various spirits within his labyrinthine house.  So sets the stage for a haunted house horror with a twist, where the house it’s self is an elaborate puzzle box that said family man and his daughter (the yummy Shannon Elizabeth) and son have to figure their way out of. 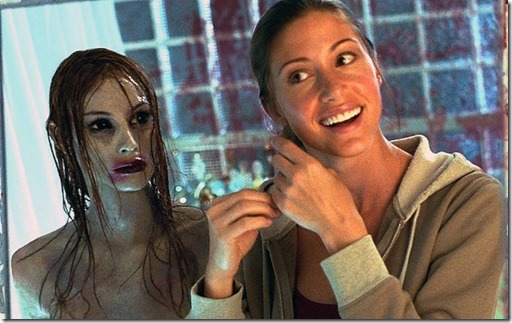 The casting here isn’t great.  Mostly TV actors along with Scream’s Matthew Lillard (still as annoying as he ever was) as well and Monk and the girl who liked to run around in her underwear a lot in Scary Movie and American Pie (Elizabeth).  But at least we get a brilliantly designed fairground attraction of a house complete with art-decor stylings and plenty of creepy mystery.  The various ghosts are also quite imaginative and boast some cool make-up effects (clearly where much of this movie’s budget went).

What is sad however is just how tame it all was, and there’s only really one decent kill and a complete lack of genuine danger (the ghosts are fairly inept at actually harming anyone…acting more like circus attractions).  F. Murray Abraham lends a little bit of thespian weight to proceedings but overall this was a glossy, yet Saw-light sort of experience that failed to bare it’s teeth.