The first movie was my favourite of 2014, so the prospect of a sequel was very exciting.  This time around we find the unorthodox gang of heroes causing strife with a race of beings after Rocket the Raccoon (voiced by Bradley Cooper) gets a little light-fingered with some batteries.  However following a space battle that could cause the guardian’s lives to end abruptly, a mysterious stranger saves the day.  Turns out Star Lord (Chris Pratt) has a Dad who just so happens to be a pretty powerful guy himself, played with charismatic flair by the ever dependable Kurt Russell.

This fills in a few gaps left over from the last movie, especially the question surrounding Chris Pratt’s father and it was great being back in the company of these very likable characters again.  The dialogue is especially sharp throughout, something that was a highlight of the last movie and the jokes & references come thick and fast to make this a ton of fun.  Pratt’s character constantly makes quips about eighties pop-culture such as TV shows like Cheers and characters such as Skelator and Pac-Man, and makes him a very relatable and refreshing presence in this sort of movie.  I was also glad to see that, despite the trailers, Baby Groot isn’t over-used but damn is he cute and very funny every second he’s on screen. 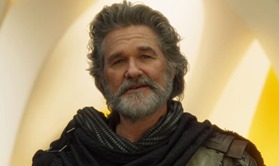 The soundtrack, another highlight last time around isn’t quite as memorable (apart from a great use of Mister Blue Sky by ELO) and a left-over side plot involving sisters Nebula (Karen Gillen) and Morgana (Zoe Saldana) felt unnecessary.  I also did not get much out of the gold-painted race that turn up at the beginning and chase after our heroes.  That being said Michael Rooker’s Yondu was again a joy and I’ve always liked the actor and we get some great moments with him here.  The same can be said for scene-stealing Dave Bautista as Drax.  Action generally is top-notch but the plot didn’t grab me as much or feel as layered this time, with the whole Kurt Russell’s planet sequence stopping the movie dead at one stage.

As it stands though this was a solid sequel and I can’t wait to see what comes next.  The Guardians of the Galaxy will return!