Sort of a follow up to my earlier post regarding Garbage’s new releases to mark Record Store Day.  Well today marked the release of these two tracks on iTunes, consisting of the collaboration with former Distiller’s singer Brody Dalle for ‘Girls Talk Shit’ and then the more instrumental, previously tour-opening / closing ‘Time Will Destroy Everything’.

Well I thought I’d finally offer up my opinion of these two tracks, as a long term fan of this band, starting with the first track.

The collaboration with Brody Dalle starts off with a haunting guitar / playful mixing combination that sounds distinctly ‘Garbage’.  Scottish front woman Shirley Manson’s lyrics again catch your attention as soon as they appear, even if her voice sounds more eerie and floaty, the singer again showcasing subtle variations, as seen in the band’s other releases over the years.  She continues to sound great.  The chorus also is very catchy, edgy and strong – ‘girls talk shit and make no bones about it’ delivered with real attitude.  When Dalle turns up, her very different, throaty tone is jarring at first but welcome and she suits the song’s edgier feel.  The only slight difficulty I have with this track is Brody’s screaming lyrics, bringing a fierce grunge style to Garbage’s sound that hasn’t been heard before – and for me, takes some getting used to.  However this remains an affective, loud and pounding track that builds in ferocity as it reaches it conclusion.  Again Garbage doing what they do best – surprising us.

The second track is Garbage returning to (slightly) more familiar territory, even if the electronica-heavy vibe isn’t usually as prominent … this feels like a Chemical Brothers track, and has distorted, heavily mixed vocals from Shirley that are sometimes hard to hear over the admittedly block rockin’ beats … the sound is very powerful and the synthesized ‘time will destroy everything’ lingered in my head.  I felt there were at times too many sounds and effects going on here … something the band can get a little carried away with … but I still enjoyed this as a total polar opposite to the other track and for it’s full on in your face lack of restraint.  It feels a bit more ‘experimental’ than Girls Talk… but still pretty cool.

As we saw last year with Garbage’s collaboration with The Screaming Females on ‘Because The Night’ the band aren’t afraid to try new sounds and new approaches to their output, and this release felt like the band really exploring and delivering something maybe the fans might not have been expecting, but again ending up with a professional and brilliantly produced piece of work.

Exciting times I’d say to be a fan of this band.  You can see the official video for ‘Girls Talk Shit’ below…

Yesterday (April 19th) marked the annual Record Store Day event where across the globe traditional record stores sell limited edition vinyl releases, often limited to a short supply to an army of hardcore fans.  My favourite band, Garbage marked this day by collaborating with singer Brody Dalle (below, right) on ‘Girls Talk Shit’ along with their own track, ‘Time Will Destroy Everything’, which has previously only been used as an intro (and outro) track to their recent world tour.  I personally am very eager to get my hands on these tracks but don’t have a record store near me where they will be sold (or er, have a turntable).  So like last year’s release of ‘Because The Night’ with The Screaming Females, I hope we see an I-tunes release in the near future – and maybe a music video?  That’d be cool. 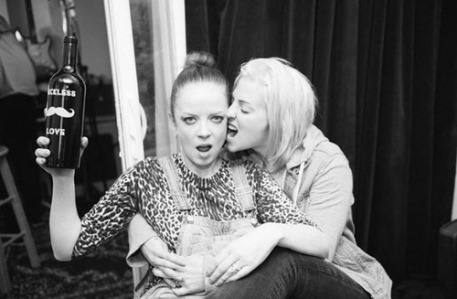