I love the movies of famed Japanese animation house ‘Studio Ghibli’, which I have made no secret of and collect pretty much anything they have done.  So it was sad to hear about the studio closing and greatly anticipate their final feature ‘When Marnie Was There’ which releases on Blu-ray in the UK in October.  For now I have stumbled upon this much older release which has been given a long-awaited western release outside of it’s native Japan with a brand new English dub for those who don’t favour the original language.

This tells the story of Taeko, a young woman who whilst travelling to the countryside, finds herself reminiscing about her childhood and at the same time trying to figure out her place in the world.  A gentle, whimsical tale not unlike more recent Ghibli movie ‘From Upon Poppie Hill’.  So you’ll find no sorceresses or magic castles in this one folks, as it’s more of a drama about life, love, growing up etc.  It’s all done in an utterly charming way with great voice work from it’s cast most notably The Force Awakens’ Daisy Ridley.  However despite interesting flashbacks and keen observations of puberty, childhood, friendship etc. I did find my mind wondering, and once Taeko reaches the countryside the story does start to plod quite noticeably to the point that watching flower picking, cooking and family meals got a bit boring.

Thankfully the art style, all hand-drawn traditional animation is beautiful – the flashbacks are done in soft-focus almost water-colour and modern day is all vibrant and brimming with detail.  Also the character of Taeko was well realised and I did find myself relating to her, causing me to reminisce over my own schooldays.  Yet it’s a movie that takes a long time to get to it’s point, focusing on the mundane a bit too much (as some Japanese animation has a tendency of doing) and is a story that’s simply ‘nice’ rather than all that engaging.  If you’re a fan of Studio Ghibli it’s still worth a look, but for me, the studio has done better.

The Blu-ray looks lush…very sharp and colourful and only slightly soft I guess when the movie requires it.  The English dub although only in Dolby 2.0 is clear and works well.  This isn’t a particularly atmospheric movie so don’t expect it to wow in that department – although that closing theme song was quite lovely.  The extras are slightly above average for a Studio Ghibli release – storyboards, behind the scenes of the voice casting, a detailed (subtitled) making of and some trailers.  So decent treatment for an enjoyable if not exactly essential movie.

Yesterday, I was informed on here by my host WordPress that I had been running this blog for 8 whole years.  Wow…a lot has happened to me in those years.  I remember first starting this blog in 2007, a sort of re-invention of an earlier version of the blog that was an outlet for my hobby and well, a way to distract myself after an unpleasant experience at the time.  In those eight years that followed, I focused on my job as an administrative assistant in a doctor’s surgery, grew closer with work colleagues and made lasting friendships that mean a lot to this day, and gradually became ‘me’ again.  I realise I can be someone who can let otherwise small experiences effect me on a very deep and personal level.  Anyone who has read this blog at any length over the past year will already know how I have had difficulty coming to terms with the breakdown of a friendship (getting on for a year back now … damn).  Yet despite moments of regret and to some extent, resentment – I have stayed positive to prevent myself turning into a miserable, bitter old grump some day.

I also really need to stop obsessing over things … in the nineties I was into Hong Kong Cinema to such an extent I got seriously sick of it … I over-dosed, and well, my brain is still like that – it gets completely fixed on things and I struggle to move onto other things, to vary my interests or hobbies, I get locked on a particular subject then milk it to death.  Sigh.  I don’t like that aspect of myself that’s for sure – but at least it isn’t all the time.

On a lighter note and to prevent you guys from clicking to some other site for fear Craig’s going to get too mopey on us … I was glad to be finally continuing with the Netflix Alphabet Challenge again, something I had let fall by the way side a bit these past few months.  It’s certainly interesting looking for a single movie from each letter, and maybe watching something I would otherwise not bother with.  In the coming weeks I’ll also be posting more reviews, some Blu-ray, Cinema and gaming (impressions) with such titles as Keanu Reeves actioner John Wick, the re-issue of Robert DeNiro classic Midnight Run and the much anticipated The Witcher III.  As we go into spring / summer videogames will as usual hit a dry-spell, but a huge RPG should keep the months rolling until September and winter looms on the horizon … and then, hey – it’ll almost be time for Garbage in London – yippee!

I was going to remark on the whole Pat Pope photography kafuffle with regards to my favourite band, but more than enough has been argued on that subject already so I won’t remark other than to say – take it outside (or in private) next time people!

Thanks for taking the time to read this little rant / blog-post and I look forward to another 8 years humbly reviewing and moaning and well – being me, in the best way I can.  Cheers for sticking around.

Well I turned 39 yesterday and it was a really enjoyable day, despite the fact I was at work.  I am fortunate to have many really good colleagues and friends at work and they all made a fuss of me, giving me cards, prezzies etc.  I also had money and gifts off my family which included the ‘Atlas Limited Edition’ of Call of Duty Advanced Warfare for Xbox One as well as the official, limited edition Call of Duty Xbox One control pad.  The game itself seems pretty decent but I’ll report more on that in another post. 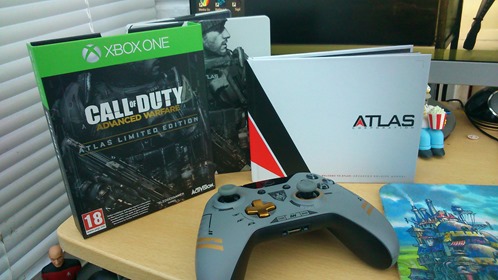 At times like this, especially as I approach forty, I certainly find myself reflecting on life, and especially the past year, which emotionally has been very up and down.  Some people come into your life and have a dramatic effect on it, then before you know it, they are gone for good.  It’s certainly hard when that happens but sometimes can’t be avoided.  Yet when I look to the things I have managed to achieve, the loving family I have around me, and the genuine friends who are still in my life, I do realise I have a lot to be thankful for.

I love writing this blog, I love watching movies, playing games, and I love my job … it challenges me and makes my life something once upon a time I never thought it would be.

I also want to thank anyone who regularly reads my posts, occasional visitors and the community here as a whole.  You’re a joy to write for and make this a very rewarding hobby.