Brace yourselves, this might get kind of rant-like.  I was a fan of the original Robert Rodriguez / Frank Miller directed Sin City, a comic book adaptation that broke the mould and helped pioneer a new way of making movies.  Yet converting a gritty, noir-ish graphic novel to the screen was never going to be easy, especially due to Frank Miller’s distinctive monochrome art-style, and although the overly bleak tone prevented the movie for me being a stone cold classic, the end result was still an incredible achievement.

This long awaited sequel however struggles almost from the start to reclaim that movie’s refreshing style or energy despite bolting together a series of plodding stories with characters that, apart from a few returning faces, fail to linger in the memory.  I was shocked to find Joseph Gordon-Levitt, Eva Green and Josh Brolin being cast, faces that I had immediately imagined as perfect for this dark, violent world; delivering performances that felt either clichéd or half-assed.  I mean Green has to get naked for the majority of her storyline to make much of an impact, and her femme-fatale character just seemed tiresome.  The same could also be said for Brolin, who looks the part and indeed plays the part, but is pretty much what Mickey Rourke’s character was all about in S C #1, and when you consider we still have Mickey Rourke’s Marv here (how…I mean, really – how?) his whole existence seems pointless.  Don’t get me started on the re-casting of Miho.

So the movie finally puts all it’s money on the slow burning revenge plot of young stripper Nancy (a still hot, feisty Jessica Alba) whose plot at least has some real drive, but by then it’s a strong case of too little, too late.

Rodriguez who has been off his game for a while now, does fill the movie with plenty of (white) blood, gore and some cool, if short lived action and the whole comic-book visual style still works a treat.  With better writing and more fire in it’s belly, this could have equalled … no, surpassed what came before.  But as it stands A Dame To Kill For was just poorly thought out and mostly forgettable.  A genuine shame.

Although I regard the original Sin City with mixed feelings (admiring the style and action, not so much the overly bleak tone…), this trailer for the long awaited follow-up is looking rather cool…  Surprised was I to see Bruce Willis and Mickey Rourke making an appearance, but more Jessica Alba is always a good thing.  New casting choices of Eva Green and Joseph Gordon-Levitt also make this a must see.

Definitely an acquired taste.  This appears to be, at least at first a dark fantasy in the style of something like Terry Gilliam’s seminal Brazil, with a distopian fantasy city called Meanwhile, and a masked avenger out to assassinate a mysterious cult leader.  Then of course we have the switches to modern day, real-world London, where a father searches for his missing son, a jilted man begins to see a figure from his past, and a disturbed student continually tries to kill herself for the sake of her art project.  Seemingly un-connected stories however begin to entwine and effect one another, and gradually, it dawned on me this was a whole lot more interesting than I at first realised – and not the film I was expecting at all. 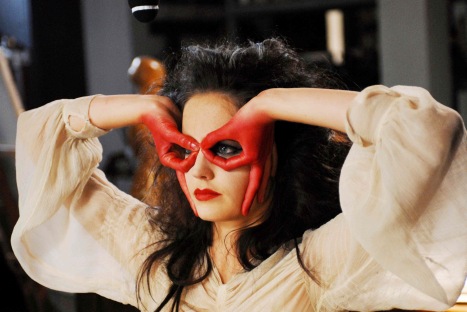 First time director Gerald McMorrow, weaves a dark, magical and often haunting tale of four very different characters, and the imagery and atmosphere is consistently breathtaking.  Add to this accomplished performances, especially from former Bond girl Eva Green who’s sheer presence on screen is a work of understated beauty.  I felt captivated and in love every time she appeared … playing both the art student and the jilted man’s mysterious girl from his past, both strikingly different.

Working on a budget around six million, it is a stunning achievement considering the restraints the director had to work with, and although it’s one of those films that will leave you puzzled and confused come the end credits, hopefully like me you will still find it enjoyable and moving, with a story you might be scratching your head over for days to come – in a good way.

You can read my original review of Casino Royale below, and I have recently sat down to watch the Blu-Ray edition.  My impressions?

The image quality throughout is the best I have yet seen Blu-ray deliver.  The opening black ‘n’ white prologue proving especially pleasing to the eye.  The level of detail present in the brighter scenes in Madagascar and The Bahamas is just phenomenal – and any doubters of the HD format should be silenced once and for all.

The movie itself stands up to repeated viewing and the love-story between Bond and Vesper (the stunning Eva Green) is both believable and creates an air of emotion and atmosphere often missing from the franchise.  The closing Venice set-piece is all the more heart breaking as a result.

This is a Bond film that has it all – heart-in-mouth action, intelligent characterisation, a credible boo-hiss villain, and a story that is grounded in reality for once.  Held up next to the other movies that preceded it and even the more recent Quantum Of Solace – this is streets ahead.

The deluxe edition, spanning two packed Blu-rays has a wealth of behind the scenes featurettes, a picture-in-picture commentary, a documentary on Ian Fleming, as well as True HD sound.  The packaging also should get a special mention as its in a lovely fold out case that has a nice to the touch coating and we also get a small booklet to flick through with some great pictures and several write ups.

One of the best Bond movies ever made on a stellar Blu-Ray disk.  Unmissable.

I don’t know whether or not I’d call myself a Bond fan – more a casual admirer, having grown up liking the classics such as Goldfinger or Live & Let Die. I also really loved Die Another Day, the (sadly) final Pierce Brosnan outing. Yet despite initial trepidation, and my general concern over the casting of Daniel Craig as the No.1 super spy – it turns out he’s the best Bond yet. A bold statement I hear you say, and granted I was reluctant to bestow such an honour on someone who looks too ugly to be the smooth secret agent we all know and love. Yet he is, because he has all the basics, the charm, the humour and the action credentials, plus he’s probably harder than any Bond there has ever been – even in their prime. He also seems more real, with more genuine emotion – or maybe Daniel Craig is just a better actor. Yet this realism is definitely how the film has been produced, and it works wonders, giving the Bond franchise a new beginning, and in some ways free reign for the film makers to remake any Bond from the past (my money’s on Goldfinger). Director Martin Campbell (who also directed Goldeneye, not to mention Mask of Zorro) brings together everything you need, superb action (with an opening hit that has to be seen to be believed) and a gripping story based on an Ian Fleming novel, which hasn’t been done in years, obviously making the whole thing stick together, just like the classics. So we should never have feared, Bond is back in a big way – this time fresh, exhilarating and above all else – cool.