In my ongoing quest to watch and review director John Carpenter’s back-catalogue, we come to this 1987 somewhat ignored entry in his filmography.  Starring genre favourite and Carpenter regular Donald Pleasence as a priest who stumbles upon a decades long secret held by a church, that has been housing a sinister, mysterious force in it’s basement.  On the death of the priest last given the task of keeping the secret er…secret, Pleasence turns to a college professor (Big Trouble in Little China’s Victor Wong) who recruits a group of students to monitor and understand the strange discovery. 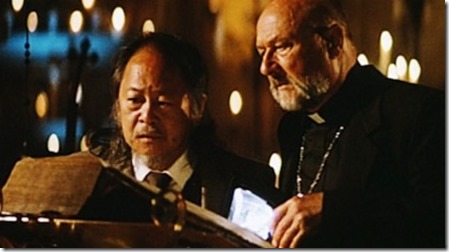 I’ve been a fan of this movie for a while, having caught it on TV numerous times.  However on viewing it recently it dawned on me that it’s night quite the sum of it’s parts.  Firstly the acting varies from passable to pretty bad, and dialogue is delivered like the cast are reading autocues, with a consistent lack of feeling.  The setting is at least creepy and unnerving and acts as a character of it’s own, and the weird vat of green mist / goo is suitably is ominous.  Also in the final act the movie cranks up the freakiness and proves effective especially once the evil presence starts taking affect on various characters.  The idea is probably a bit too ambitious for it’s own good and doesn’t quite deliver either in scares or concept, feeling half-finished.  It also takes itself way too seriously.  Not one of Carpenter’s worst, but not up their with his best either.

I didn’t manage to pick up the also available deluxe edition of this Studio Canal release that comes in the same packaging treatment as the recently released Escape from New York and The Fog, but we still get some decent extras.  This includes the always essential John Carpenter commentary, as well as interviews, scene analysis, trailers, behind the scenes featurette and a photo gallery.  The movie itself is in decent shape, with Carpenter’s eerie score proving especially effective in DTS HD 5.1.  Dialogue is also crisp and the movie looks good, if a little smudgy and overly soft in places.  Overall above average treatment for a fun if ultimately unsatisfying movie.

Director John Carpenter remains one of my favourite directors of all time. That’s not to say all his movies are masterpieces, but he firmly places his signature on all of them and I usually come away enjoying many aspects. The same can said for this cult favourite from 1981.

Kurt Russell plays Snake Plisken, a legendary soldier who on his arrival at a maximum security prison facility thats taken over Manhattan island in a futuristic version of New York … is about to be incarcerated for armed robbery. However after the President’s plane gets hijacked and he’s forced to board an escape pod launched into said prison island, the government call on Snake to go on a rescue mission. I remember loving this concept as a kid and hell, nobody looks more bad-ass than Kurt Russell with an eye patch and a semi-automatic. However I also recall not really being that into the movie itself.

Not much has changed. This is a particularly moody piece disguised as an action-thriller. It has all the required ingredients of pure popcorn entertainment, but somethings missing. The movie takes its time throughout and lacks any real thrills (not helped by what appears to be a tiny budget). However Carpenter helps by sprinkling several colourful characters here and there (with a stand-out Harry Dean Stanton) and along with Dean Cundey’s atmospheric and gloomy cinematography mixed with Carpenters own synth score, this still held my attention. Donald Pleasance, a Carpenter regular also pops up as the President, although lacks his usual presence. Overall this is Kurt Russell’s show and he’s great as a character way cooler than the movie he’s in, and every second the character is on screen, I couldn’t help but be mesmerised. One of those cult favourites still worth a watch, but not as memorable as its reputation might have you believe.

This new Blu-ray from Studio Canal comes in deluxe fold-out packaging boasting a poster, art cards and a detailed booklet. The movie is in decent shape (offered up in both 4K and HD editions) boosted by two soundtrack options that includes a new 5.1 DTS HD Master Audio soundtrack that although far from a surround showcase, sounds heftier and sharper than the otherwise acceptable stereo score. The picture whilst understandably gloomy is detailed and does the job marred only by an overly soft presentation. I didn’t get to check out the 4K transfer as I don’t have access currently to a 4K screen. Extras consist of a 52 minute documentary, deleted scenes etc. and four commentaries – which round off a very impressive package. Oh and they threw the CD soundtrack in also.

I went through a phase of collecting the movies of revered Italian horror director Dario Argento in the early-to-mid 2000s, and had nearly every movie he’d made on DVD, whilst always trying to seek out the most complete, uncut versions of his art.  With the advent of Blu-ray I sort of began collecting again, to a less obsessive extent but have been happy to see some of his movies get deluxe releases in recent times.  Therefore we come to one of his more bizarre and most mistreated works.

Just prior to finding world-wide fame in children’s fantasy ‘Labyrinth’ this stars a young Jennifer Connelly as a student who comes to stay at an elite school for girls in Switzerland and quickly befriends her rebellious roommate.   However at the same time there have been reports of a series of brutal murders involving female students and with the help of a paraplegic insect expert played by genre legend Donald Pleasence and Jennifer’s own ability to communicate with insects, an investigation ensues to unmask a killer.

This blends two of Argento’s favourite styles; dark-fantasy and murder mystery and is very similar in tone to his acclaimed classic ‘Suspiria’, sort of a spiritual successor you might say.  However unlike that movie this lacks the excessive style and garish colour pallet (despite a few visual flourishes here and there).  We also get some woefully amateurish performances, even from Pleasance who sports a dodgy accent throughout (is he attempting Scottish?) and dialogue is delivered for the most part personality-free.  The plot is also a bit messy and not very well written with some faintly ridiculous moments (Jennifer declaring to a bunch of bullying schoolgirls “I love you all” and Pleasence happily sending Jennifer to track down a killer).  However if you can look past such shortcomings you still get an entertaining and suitably-violent ride with several great set-pieces and excellent use of a pulse pounding score by not only Argento regulars ‘Goblin’ but also ‘Iron Maiden’ and ‘Motorhead’.  Far from Argento’s best, but with a b-movie schlocky vibe to it all, there’s still fun to be had and remains streets ahead of the director’s more recent work.  There’s also a chimp brandishing a straight razor – so what’s not to love? 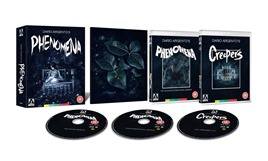 The Blu-ray, another impressive job from Arrow Video comes with three cuts of the movie, the International Version at 110mins, the slightly longer Italian Version at 116mins and the heavily cut Creepers U.S. release at 83mins.  My preference is the International Version even if it has some long drawn out moments of throwaway dialogue that could easily have been trimmed.  The Italian Version is pretty similar but has inserts of Italian-only scenes complete with subtitles but is great for completionists.  I haven’t watched the Creepers cut but hear it’s not good at all.    The new 4k restoration of the image is very good however.  Clean and mostly pretty detailed.  The soundtrack (in 5.1 DTS HD Master Audio and 2.0 Stereo) is also very pleasing even if dialogue sounded a bit low (especially noticeable when the music kicks in) and surrounds are given some love with the various music inserts.  Extras are plentiful with a feature length documentary consisting of new interviews with Dario Argento, actors Daria Nicolodi and Fiore Argento (no sign of Connelly sadly) and with production crew and effects artists.  We also get a brilliant commentary on the Italian Version by author Troy Howarth.  Rounding out the release is a detailed 60 page booklet.