I had mixed emotions whether I was going to watch this sequel to the sort-of spin-off / reboot to the famed Rocky franchise. I really liked but didn’t love the first movie but after hearing about the setup this time around, I’ll admit I was very much intrigued. After becoming world heavyweight champion, Adonis Creed (Michael B Jordan) the son of former champ Apollo Creed gets an offer from a new boxer hailing from Russia – Victor Drago, the son of Ivan Drago (Dolph Lundgren) the man who killed his Dad in the ring back in 1985 (Rocky IV). With Ivan on hand as Victor’s trainer also, it quickly brings back painful memories for Rocky Balboa (Sylvester Stallone) who doesn’t approve of Creed taking on the fight, believing old wounds shouldn’t be re-opened.

I’ve gone on record in the past as saying, for as much as Michael B Jordan always looks good in movies, especially in the first movie, his acting skills have never quite been up to the task. Here though he fairs better and is given much more depth thanks to fleshed out relationships, not just with Stallone but also his girlfriend and mother, and is given a bigger, more emotional journey too. Add to this great support from Stallone who may take more of a back seat to give Jordan the spotlight – but still delivers. I was also surprised and pleased to see that, although very subtle, Victor Drago and his father Ivan’s relationship was given much more than the one-dimensional bad guys treatment.

Every story-beat and character moment was well done too that even if the material and the structure is far from new, it’s the way it was directed, with skill and care by relative unknown Steven Caple Jr. Oh and its a boxing movie so what about the fights? Superbly filmed and visceral that every punch had genuine impact. Some of the most effective fight footage I’ve seen in a long time. Yeah, not really much to criticise here. It dabbles in a few cliches, has a couple of corny tugging-on-heart-strings moments, but comes together to make one of the best Rocky movies that’s not strictly a Rocky movie. A must see.

When Nicole Kidman’s Atlantian queen washes up before a lighthouse, her forbidden love with land-dweller Temuera Morrison produces Arthur a half-breed who grows up to become underwater superhero Aquaman. However despite his reluctance to be the hero he’s destined to become, a war at his home world of Atlantis causes his own kind to come calling. 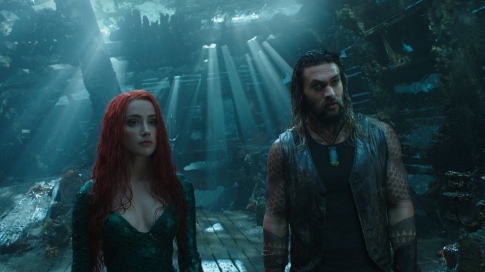 This colourful, energetic comic book adaption has a potentially star-making central performance from Game of Thrones’ Jason Momoa and delivers a setting that immediately intrigues. It’s a shame then, that an over-use of CGI and green screen means that almost nothing in this looks like it was shot on location, leading to a largely artificial look and feel. Add to this a cliched story I felt I’d already watched with strong resemblances to the Thor films and Black Panther, with predictable revelations and plot twists … and what’s left is a movie that feels like it arrived too late for its own party. Momoa is charismatic and well cast and handles a plethora of fight sequences with genuine skill and showmanship, and the gorgeous Amber Heard is equally enjoyable. Willem Defoe feels kind of miscast and despite often being cast as the villain – should still have been the villain (Patrick Wilson is largely forgettable) and what really, is Dolph Lundgren doing here?

With that all said it’s hard not to be entertained. The action is slick and at times jaw-dropping (a particular roof top chase is heart-in-mouth exciting) and at times it’s really feel good. It re-introduces the character (following Justice League) well and brings with it a fascinating underwater world ripe for sequels. Just a pity it’s all feels so deja-vu.

Just the idea of this movie was enough to get me excited.  Some of the greatest action stars of the eighties, joined by a few modern action stars, all in the same film?  Where do I buy the ticket?   Now beyond this initial pull, the plot follows tough ass covert mercenaries for hire who are called into assassinate an evil dictator in South America.  Sylvester Stallone catches the eye of a pretty woman though who also happens to be the dictator’s daughter, and soon the mission becomes personal and everybody gets to blow shit up – big time.