I think I’m not alone in being a little tired of Johnny Depp’s over-the-top caricatures in movies like Pirates of the Caribbean and Alice In Wonderland, even if he is often good in those roles.  Occasionally however it’s nice to see him in a more normal acting role, and to some extent this is a perfect vehicle for him.  He plays Boston gangster Jimmy ‘whitey’ Bulger; a ruthless and manipulative thug and leader of a local gang.  One day however an old friend from the neighbourhood comes knocking to ask a favour, who also happens to be an FBI agent out to nail the local Mafia, and soon an awkward alliance is formed.

This gritty and occasionally very violent crime yarn based on true events is well cast and well directed and I was swept up by the realism and atmosphere.  At first it takes a bit of getting used to Depp’s make-up and he stands out a bit compared to the other cast members for this, but thankfully an assured and gradually menacing performance shines through and Depp proves himself equally adept at villainous characters as he is light hearted ones.  Also he’s not the only one who delivers a strong performance as the often underrated Joel Egerton (The Gift) is brilliantly conflicted as an FBI agent in bed with the devil.  Benedict Cumberbatch turns up as Whitey’s politician brother but only adds marginal screen presence, and Kevin Bacon appears as a  very shouty FBI chief.  Yet it’s the uneasy relationship between Depp’s mobster and Egerton’s Fed that carries the movie and proves edge of the seat and powerful with a few moments that genuinely shock (the prostitute).

It may not be as complex or as layered as some crime epics, and how things wrapped up confused me a bit … but overall, I had a very good time with this and those after a decent crime thriller need look no further.

I loved the 1990 British biopic of The Krays starring former Spandau Ballet brothers Gary & Martin Kemp which for me had long been one of the best gangster movies I had seen.  However I haven’t seen that rendition in a long time so the prospect of a new adaptation of the famed East End mobsters’ story was exciting.  Also the fact current hot property Tom Hardy (Mad Max Fury Road) was taking on the roles of both Ronnie & Reggie Kray meant this couldn’t fail … or could it? 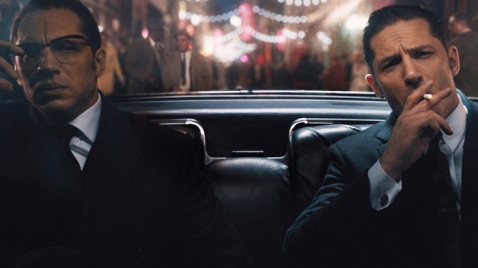 Set during the height of the gangster’s reign over the criminal underworld in the 1960s, Reggie and his rather unstable brother Ronnie have London eating out of their hands; rubbing shoulders with celebrities, owning nightclubs and about to go into business with the Italian Mafia.  Told primarily from the perspective of Reggie’s wife Francis (Emily Browning – who somehow still has a career after the god-awful Sleeping Beauty) this promises to be another mob classic to stand alongside movies such as Goodfellas.  Yet in the hands of director Brian Helgeland (A Knight’s Tale), we get anything but that.  His direction is plodding despite decent production value and eye-catching photography, but for a mob movie there is a total lack of menace.  I didn’t feel like these people were all that intimidating or scary, and in a decent gangster yarn, I’m usually always a bit nervy of something kicking off any second.  This is not helped by the focus on Reggie & Francis’ relationship where the casting of the porcelain pretty Emily Browning once again proves her as one of the most uninteresting actresses currently working, not helped by her snore-inducing narration.  This needed much more of the criminal lifestyle and the enforcing of that lifestyle … yet mob hits come out of nowhere, and famous murders just happen with no build up.  Trying his damndest is Tom Hardy but although charismatic as Reggie, his apparent control and intimidation of Francis is bizarrely glossed over, making a certain turn of events later on come out of nowhere.  On the flip side his portrayal of Ronnie is borderline farcical, the legendary gangland mobster reduced to an absurd caricature rather than particularly threatening (the trumpet blowing scene almost had me giggling in embarrassment).

So the tone and pacing and everything other than the look was totally off, and important characters to the Kray’s story such as their mother or infamous names like Jack ‘the hat’ McVittie are little more than ‘just there’ when their inclusion could have helped with the movie’s authenticity (which has to be said, it takes liberties with).  The Krays were fascinating and pretty scary in real life by all accounts – but this interpretation failed to capture hardly any of what made them famous or ironically, legends.

The moderate hype surrounding this relatively low key crime drama is that it was the final performance of acclaimed actor James Gandolfini, who rose to iconic status in the hit TV show The Sopranos playing charismatic mob boss Tony Soprano.  Add to this the pairing of him with current hot property Tom Hardy (Mad Max: Fury Road) and this was a more than alluring prospect for an evening’s entertainment. 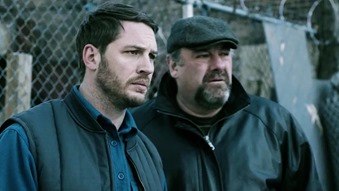 Hardy plays Bob, a softly spoken, likable bartender at a local establishment that is used as a ‘drop’ for mob money that’s then handed over to a local Chechnyan gang. Gandolfini is Marv, former owner of the bar and cousin to Bob. Following a hold up one night however, Bob & Marv find themselves in debt to the gangsters and must figure a way of getting the stolen money back. At the same time Bob befriends a local girl who has more than a few problems herself.

As the final role for Gandolfini, this offered up little that wasn’t seen in The Sopranos and isn’t much of a stretch for the actor, even though he clearly still had presence. His character is also a little confusing and I found it hard understanding some of his actions. Hardy fairs better and clearly it’s his film and he again brings to the table a quiet, moody character that he seems to do in every film, with that hint of underlying rage. Noomi Rapace appears as the troubled love interest and is decent also, with her friendship with Bob proving the backbone of the story. For a crime drama this was less about people getting whacked and more a character-piece, but didn’t stand out in any particular way despite a screenplay from famed author Dennis Lehane (Shutter Island).  Enjoyable at times and has a good ending, but overall a little too lightweight for it’s own good.

Sometimes there is a reason you don’t get around to watching a particular movie.  Maybe it’s just passed you by, other movies have caught your interest more … or something is trying to tell you, it’s not really as good as you’ve heard.  This is one such movie.

Johnny Depp plays undercover FBI agent Donnie Brasco who gets embroiled in the goings on of a gang in New York and gets mentored by aging mobster Lefty (Al Pacino).  Based in a true story this is of course an intriguing set up and makes for at first engrossing viewing.  Pacino this time around isn’t playing the boss, the main guy, but more an always overlooked and fairly disgruntled ‘hood with one eye on a boat trip out of town, and another on the boss’s job.  It’s definitely an interesting change of pace for the usually loud and brash actor.  Depp is the confident, slightly cock-sure guy who thinks he’s got it all under control, as his family life begins to fall apart and he gets pulled further and further into the underworld.  Michael Madsen is on hand as the guy everyone fears and looks up to.

Depp & Pacino’s friendship holds this together well, but isn’t the most convincing, as Lefty seems to take much of Donnie at face value despite many moments that should have lead him to question the guy’s identity.  There is however plenty of tension as Donnie juggles his family life with that of the mob and tries to keep one step ahead of everyone else as the FBI increasingly pressure him for results.

The biggest issue is the supporting cast.  The surrounding actors are plucked from the poor-man’s mob actor barrel, lacking much of the menace or presence of a Joe Pesci or Harvey Keitel.  British director Mike Newell goes for a realistic style and avoids much of the grandeur or energy of other great mob movies like Goodfellas. With only smattering of violence and a script that often felt like it was satirizing the world it was depicting (how many times do we hear ‘forget about it’ ?), something about this just never came to life.  Add an ending that seriously lacked the big pay-off I’d been lead to believe was coming … and I came away rather disappointed.

Blimey, I have seen some violent films in my time…but this takes the biscuit.  There’s more stabbings, beatings, broken faces, smashed beer bottles and spurts of blood per minute in this film than I think I have ever witnessed.  Add to this some extreme uses of colourful language, shagging, tits, and then more violence – and I think you get the idea what this film is like.  Form an orderly cue at the door if it’s not your ‘bag’.

Now don’t get me wrong, this is a well made, very well acted Brit gangster flick with more balls-to-the-wall energy than The Krays & Snatch put together, following the rise of Essex hard-man Carlton Leach (Ricci Harnett) from nutter football hooligan to nutter bouncer to slightly less nutter gang leader.  There’s no glamour here ladies & gentlemen, just mad bastards doing mad things all in the name of greed, money, drugs and power – usually all sorted out with a good kicking.  The story is fascinating, especially as its based on true events, and some recognisable faces pop up from your favourite Brit crime flicks and even Eastenders.

My only gripe remains that there’s nobody to identify with (unless you yourself are a head case sociopath) and Carlton Leach is just portrayed as an unpleasant scum bag.  Yet if like me you can eat this stuff up for breakfast, then this is well worth your time, as its all done with such assured power, that its hard not to be impressed.