There seems to be a theme of late in these continuing comic book franchises, that of repercussions and casualties of otherwise heroic endeavours.  First we had Batman facing off against Superman after the fall out from Superman saving the world from the threat of General Zod, and now we have the Avengers turning against each other when a government initiative tries to Police them.  Tony Stark / Iron-Man (Robert Downey Jnr) feels his band of heroes, that he helped put together has caused too any deaths in their bid to save the greater population, but Steve Rogers / Captain America (Chris Evans) doesn’t feel having to await orders from a higher power is the way to go if or when a new threat appears.  Then in the midst of their conflicted beliefs, Steve’s old friend, elite brain-washed super assassin The Winter Soldier is supposedly linked to a terrorist bombing. 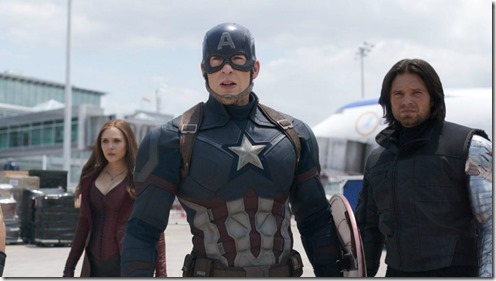 This complex plot at least on paper is aided immeasurably by a wealth of solid, at times stellar performances and it’s ensemble cast, that also includes Scarlett Johansson’s Black Widow and even Spider-Man to name but two, never feels bloated or confused.  The writing is key here and everyone’s agenda and personality gets time to shine and despite a ton of superbly executed fights, chases and battles the focus on character and agendas is brilliantly done.

However once again rather vague references to the other movies in the series gets a bit mind-blowing at times unless you’ve you have a cast-iron memory for the Marvel movie cannon (including Iron-Man 3 and Avengers 1 & 2).  Also, I thought how the villain’s master plan seemed to rely on a rather convenient plot development was a little cheap … but this isn’t a movie that follows a tried and tested route and how things eventually turned out surprised and shocked in equal measure … not something we normally get in these kinds of movies.

I had a great time with this as you’ll probably have figured out and along with the last two movies in the Captain America franchise, you can consider this a hat-trick of quality entertainment.  And it delivers the ‘heroes turning against each other’ better than Batman V Superman.