I don’t really know what I was expecting from a movie continuation of arguably one of the best TV shows ever made. Breaking Bad had one of the more satisfying endings, and so was there really anything left to explore? 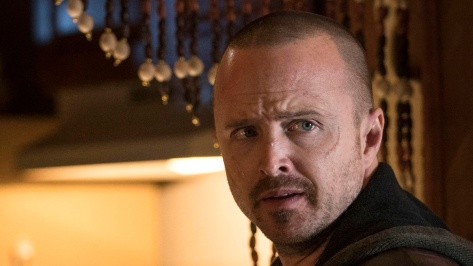 Focusing on what happened next when it comes to the character of Jesse Pinkman (Aaron Paul) seemed the obvious answer, as we explore just where he was driving off to after being freed by his captors by series lead Walter White (Bryan Cranston). Whilst keeping one step ahead of the law, he turns to old buddies Badger and Skinny Pete. So yeah, we get several returning faces, mostly during a number of reminiscing scenes that surprisingly make up for a good portion of the runtime … meaning that there really isn’t much going on here other than getting from point A to point B. Paul is very good and layered as Jesse and despite his circumstances still manages to reveal a few of those fun Jesse characteristics that made his character so memorable in the show.

I’d have liked a bit more ‘life and death’ stakes to his situation but that barely comes across and I always felt Jesse was going to be fine. Which took away some of the drama. Also scenes of flashbacks and smaller moments are dragged out just to celebrate the show rather than offering any really service to the plot.

Not a revelation then, and can’t touch some of the bigger moments of the show but as a swan song to a beloved character this was precisely what it needed to be and nothing more.

Well the day is finally here.  Here’s what I got this year…

Consisting of this year’s prezzies was:  USB powered computer speakers (JBL Pebbles), the complete Breaking Bad on Blu-ray, A Nightmare On Elm Street seven film collection, again on Blu-ray and a surprise, the complete Die Hard also on Blu-ray.  Add to this a very nice pen that’s been engraved with my name on it, and the official Scarlett Johansson 2015 calendar … growl!  Not pictured was various smellies, clothing, sweets etc. etc.  All in all very very pleased.

So wishing everyone a really great Christmas and to those that I got presents for, hope you like what I got you!

The end of the year is approaching and as always with this blog I will be posting my personal Top Ten, based on movies I have seen in the last twelve months.  It’s very difficult as a complete amateur movie critic as I am literally unable to watch every new movie that hits cinemas, so compile my list from the newest movies I have seen during the year, even if some came out the year before etc.

Compiled below are a few movies that left me wanting, movies that although not a disaster, could have been much better – or were hyped to be much better.  You may or may not agree with my choices, and feel free to comment.  But for now these are my disappointments of 2014…

Remakes are never that great granted, but wasn’t this classic sci-fi thriller ripe for an update?  So what do we get … a re-tread of the original, but seriously watered down and completely devoid of both the violence and the social commentary that made the 1987 original so memorable.  Paul Verheoven must have been offended how much the director ‘didn’t get’ his vision, and even some pretty decent action and not-bad casting could not save this.

When will I stop hearing about this pretty, fun but utterly generic Disney movie?  One memorable song, some fun comedy characters but typical Disney Princess fair that lacked ideas and originality.  Don’t get me wrong, it’s a good movie – but as good as EVERYONE goes on about …. no.  Give me Beauty & The Beast any day of the week.

This did a lot right, it did a lot wrong too.  A monster-mash that takes most of the movie to actually happen, and decent casting that is all but wasted.  Bryan (Breaking Bad) Cranston – that’s all I need to say, but nooo, let’s make Kick-Ass the star instead.  Wrong!  Great effects work aside and some nail biting moments, but overall this could have, should have been much more.

Simple, how do you mess up a perfectly decent reboot of a popular franchise?  How about only one action sequence of any note and the casting of Keira Knightley.  Chris Pine, fresh off Star Trek does a good enough job, but this was mostly Bourne-light with a clichéd story and not enough boom for my buck.  Could have been superb, but was mostly ‘meh.

Rave reviews don’t mean a decent experience I am quickly realising.  I wasn’t the biggest fan of WC #1 but this promised everything that movie lacked, like a faster pace and tons more gore and violence.  Yet an overly tongue-in-cheek tone and way too many one-liners just killed this for me.  Could have been a first rate shit yourself slasher, but instead I got a second rate piss myself farce.

Still despite the best intentions this reboot of the blockbuster franchise still underwhelms.  I can’t get used to Andrew Garfield as Spidy/Peter Parker and even the casting of Jamie Foxx is embarrassingly poor.  The overly kiddie-friendly tone doesn’t help either.  Great special effects though.

Studio Ghibli is always an event to me, and their animation style can never be faulted.  However with this rather personal swan-song for director Hayao Myazaki the subject seemed rather niche and the characters not overly compelling, and the whole movie despite being well done, lacked that spark that makes Ghibli great.  Stunning to look at but not that memorable, even more disappointing considering it’s the famed director’s final movie.

X-Men Days Of Future Past

Another highly acclaimed movie, another one that left me feeling cold.  The plot was muddled, relied too heavily on you knowing what happened in all the other X-Men movies, and some fun time travel mechanics and a great cast of characters couldn’t save this fun, action-packed but ultimately confusing and messy movie.  Never get tired of Mystique kicking ass though.

There you go.  I may add to this list if December throws up any further disappointments, but with The Hobbit: The Battle Of The Five Armies, Exodus: Gods & Kings and also Guardians Of The Galaxy all to come (hopefully), maybe that won’t happen.  Also expect my definitive end of year Top Ten around New Year’s eve.

Ah, the blockbuster, that high concept thrill ride usually packed with special effects and not much depth (cough, Michael Bay, cough) but every now and then we get a summer event picture that at least tries to have an engaging story or half decent acting, and this somewhat throwback to 50s b-movies and Japanese sub-culture casts Bryan Cranston, fresh from his iconic turn in the multi-award winning Breaking Bad as a scientist who following a nuclear meltdown at the plant he works at, becomes obsessed with a government cover up in Japan and desperate to find out what really happened.

Not hard to guess it’s all really a cover up for the discovery of a very big lizard as well as a bunch of ready to hatch monsters, with the biggest smack-down in history just on the horizon.  This is fun, hokey but very well done entertainment.  Cranston, a very emotional and believable actor is as expected very good here, as is Aaron Taylor-Johnson (Kick-Ass) as Cranston’s soldier / bomb-expert son in a more mature role than I’ve personally seen before.  The story is packed with conspiracy theories, cover ups etc …and I love that sort of thing, and when we finally get some monster action (about an hour or so in) it’s full on, superbly staged and awe-inspiring to the point of actually being quite scary.  The views from the people and soldiers as giant monsters loom overhead, or close by is nerve-shredding – achieving a sense of greatness and magnitude.  Effects are also first rate with the destruction of cities, explosions and just general mayhem all packing a visual and emotional punch.

Other than it’s b-movie routs however, the movie has little else to say and I felt the first half was stretched out … we’re not here after all to look at readings on a screen and talk about nuclear testing, we want monsters!  But for a blockbuster that does exactly what you might expect, with a decent, if a little under-used cast (Cranston) and some genuinely powerful moments … you still can’t go wrong.  Just don’t expect much else.