This is an easy thing to admit – Megan Fox is hot!  Ok, that’s out of the way, so what is this latest horror all about then?  Well, Megan plays super-hot cheer leader Jennifer who is the object of every guy’s fantasy at the high school she attends in a small town.  She also happens to be the unlikely best friend of class nerd ‘Needy’, a book-worm always living in Jennifer’s shadow.  Yet when we first meet Needy, she’s a bad-ass juvenile offender in a borstal, and it’s clear some bad shit has gone down.  Flash back to high school, and now be-spectacled Needy watches as her sex bomb friend drags her to a sleazy bar where a goth rock band are performing, with her mind set on boinking the lead singer.  Yet something goes horribly wrong and Jennifer ends up possessed by a demon, and is soon using her obvious womanly charms to lure high school jocks to their gruesome end and dining on their innards! 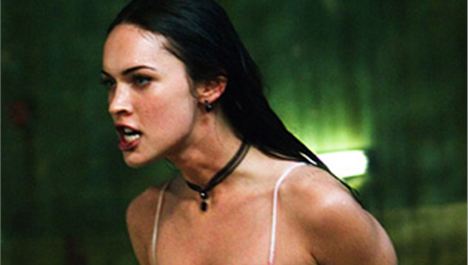 This funky little movie has plenty of personality, sharp dialogue, a stand out performance by Amanda Syfried as Needy and some decent jump-scares and messy effects work.  It all resembles (a little too closely) the much darker ‘Ginger Snaps’ from a few years back which had a similar premise but threw werewolves into the mix rather than demonic possession.  Yet saying that, this has plenty of good moments, with an eye catching girl on girl snog that has MTV’s best-kiss award written all over it, and enough shots of Megan Fox in her underwear to get any guy shifting uncomfortably in his cinema seat.  Also worthy of note is an appearance by The OC’s Adam Brody as the goth band’s slightly unhinged lead singer, and proves to be an actor to watch – as he has a knack of stealing any scene he appears in with his talent for quality dialogue delivery.  Some of the violence does come across a little amateurish and not particularly well staged at times, and naturally if you have watched the Transformers movies, Megan has no real talent beyond her looks, so doesn’t deliver a particularly menacing villian … but thankfully this is all masked with loud rock music, fancy editing and an energetic pace – meaning you should enjoy it anyway.