The true story of a former Olympic class skier who went onto run the worlds most exclusive, high stakes poker game, attracting celebrity names along with the interest of the FBI in the process.  Jessica Chastain plays Molly as an ambitious, if initially naive woman who see’s a chance for fortune and infamy after an accident ended her hopes of becoming a skiing champion.

Initially this movie had a feel of the Scorsese hit The Wolf Of Wall Street with it’s regular person rising to riches through not-entirely-legal activities, but director Aaron Sorkin lacks the flair to truly pull it off.  Instead we get a simple tale of someone getting way out of their depth fast and failing to check one’s ego at the door.  Molly throughout is a rather unsympathetic character and even when she turns to Lawyer Idris Elba who tries every trick in the book to reduce the heat on her back, that lust for power and credit for herself constantly wins out.  Chastain is gorgeous and pretty damn sexy despite a flawed character and the movie knows it, showcasing her obvious ‘charms’ every chance it gets – which is all the time.  Thankfully a back story involving an effective, if clichéd pushy-father-under-loved daughter relationship at least gives Molly some depth.  Yet Idris Elba’s questionable American accent fails to showcase Sorkin’s complex but brilliantly written dialogue the way I’m guessing the director intended.

Overall this is a fascinating true story but lacks a degree of sensationalism that may have upped the entertainment, due to a reliance on discretion when having the opportunity to name drop any famous faces (player x for anyone interested, was rumoured to be Toby Maguire).  So from what I hear this remains somewhat a missed opportunity compared to the more warts and all book the movie is based on.

I’ll admit to not being a fan of Facebook.  There, I said it.  I’ve been on the site as a member and built up a friends list, but something about the artificiality of the social experience it professes to provide feels fake and ultimately isolating.   So what excuse would I ever need to see a movie about Facebook?  I have just one:  David Fincher. 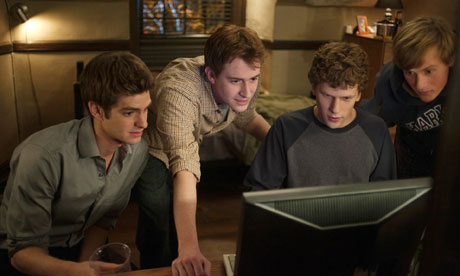