So readers, here it is.  After much deliberation, list-making etc, I have finally come up with my Top Ten, comprised of the best movies I have watched this year.

I think this year has been very memorable and offered up some very interesting and unique movies.  Of those that did not quite make the above list, I would also recommend the following:  Tangled, The Fighter, Insidious and Hanna.

…and so we reach the final quarter, and with the last three months, some gems appeared and a few not so gem-like…. enjoy.

October started off with the enjoyable but underwhelming Scream 4 that considering the long gap between that and the last movie, delivered clever ideas, but not much new.  Revisiting the Star Wars saga continued with four of the six movies being viewed and reviewed, which was exhaustive to say the least, but very memorable … and documentary-style sci-fi drama Monsters impressed with great performances and a very convincing atmosphere.

Drive Angry was a fun road-movie come horror actioner, with a great Nicolas Cage and a sexy-as-hell Amber Heard.  Not a bad way to start off November.  Justine Timberlake made for a credible action hero in sci-fi thriller In Time, and Spanish chiller Julia’s Eyes delivered tension, good performances and brilliantly executed scares.  It was great to view The Lion King again, in pin-sharp Blu-ray, and also a second viewing of Quentin Tarantino’s Inglorious Basterds proved it to be a better movie than I had originally realised.  The Strangers however was disappointing and predictable, and really, the premise was done better in French horror Ils (aka Them).

So, now you must be asking yourself, with all these movies in mind, what will make the final Top Ten.  Well, you will just have to wait until later today.  Happy New Year!!

With the year really in its stride now, my viewing habits once again danced between old favourites and new titles.  Hope you see something you might have otherwise passed by… 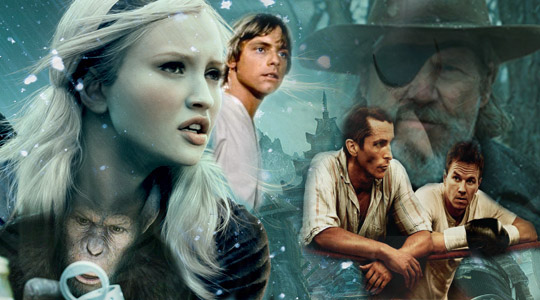 The summer movie season being in full swing, I spent July mostly trawling through the remainder of The Lord Of The Rings Trilogy.  Sucker Punch may have not made a great deal of sense, but with plenty of ‘cool’ and scantily clad women wielding swords and machine guns it was still a lot of fun.  Then Christian Bale impressed as a drug-addled ex-boxer training up younger brother Mark Wahlberg in the very absorbing The Fighter.   Brit-gangster drama Brighton Rock disappointed though with a unconvicing cut-throat lead and a bordering-on-pathetic female co-star.  The English seaside however, was captured nicely.  Thankfully the Coen Brother’s award winning True Grit made for a great western, if not necessary that deep a story, but child actor Halee Steinfeld was very good indeed.

August kicked off with gory grindhouse action-comedy Hobo With A Shotgun.  Rutger Hauer may be great but supporting cast and surrounding film was more gross-out bad taste than b-movie classic.  Jake Gyllenhaal in Source Code was great, with the movie equal parts Hitchcock and Quantum Leap, and all round entertaining.  Costume caper Super may have had plenty of ideas, but felt a little deja-vu and even the excellent Ellen Page couldn’t save it.  A movie-light month ended brilliantly though with the clever and exhilarating Rise Of The Planet Of The Apes.

Pre-teen killing machine Hanna appeared in September and surprised by how heart warming and less bad ass it ended up being.  Yet much of the month was dedicated to rediscovering the Star Wars saga, from the prequels right through to the older movies, in order – and it was brilliant.  Comedy Hall-Pass was one of the better comedies in recent memory, with genuine laughs and plenty of surprises.  And ending the month was Hole 3D, a great throwback to the likes of Gremlins and The Gate, scary, freaky and a great deal of fun.

So onto the final quarter.  Coming very soon indeed!

Well, 2011 is almost over and with Christmas on the horizon, it seems unlikely (but not impossible) that I will get to see many more movies before the year is out.  With that in mind I am currently compiling an end of year Top Ten taken from the reviews on this blog in the last twelve months.  Now as an amateur critic / blogger I haven’t been able to see all the best movies that have hit cinemas in 2011, so some choices will inevitably be from movies released last year that I only recently managed to check out on DVD or Blu-ray.  It definitely shouldn’t be taken as a definitive 2011 Top Ten, but more a list of my favourite movies as viewed in 2011.  I’ll try to not make any entry older than 2010 if possible.

I won’t give anything away though and I’m sure regular readers will have their own ideas what might appear in the list.  Until then (end of the month), watch this space!