Any movie attempting to tell the true story of notorious serial killer Ted Bundy is a daunting prospect. From what I’ve heard, he was an incredibly prolific, charismatic and manipulative psychopath who did some of the cruelest and most depraved serial murders in American history. So when I heard former High School Musical actor Zac Efron was taking on the role, I must admit … I was intrigued. 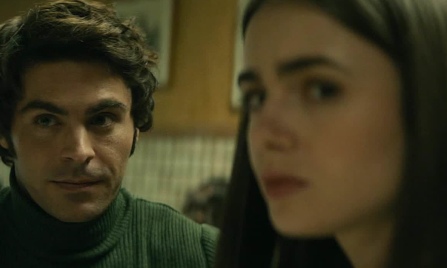 Focusing on Bundy’s relationship with Elizabeth Kendall (Lilly Collins) this is told mostly from her point of view. A similar approach to that Tom Hardy Krays movie from a few years back. However such an approach means we don’t really get to explore what made Ted who he was, and for the most part the accusations and subsequent manhunt come off as ill-fitting to the man we see Efron portraying. The various murders are not recreated and told only in news footage or Police chatter, so a sense of the sheer horrendous nature of the crimes is glossed over. In an attempt to give some depth to Bundy and Liz’s struggling relationship, a plot thread involving the book ‘Papillon’ is introduced and from all recorded testimonies this inclusion is pure fiction, and the documented telephone confession he apparently gave to Liz whilst on the run, is removed entirely in favour of a rather weak sort-of confession scene towards the end. Such inaccuracies to the real life events left me wondering what director Joe Berlinger‘s intentions were, considering he also delivered a documentary called The Ted Bundy Tapes to Netflix prior to this movie’s release.

However Zac Efron is still very good as Bundy and proves charming, like the real person, as well as occasionally creepy. Yet the stand out here is Collins who delivers a very convincing portrayal of a woman who refused to admit shes was going out with a monster. Overall though, this was far too lightweight considering the subject and mostly a missed opportunity.