I only mildly got into Pokémon last Christmas when I had Pokémon Let’s Go for the Nintendo Switch. The world and all the creatures within certainly fascinated me and so a live action movie definitely appealed. This somewhat weirdly has Ryan Reynolds as the voice of Pikachu, and follows a story set in the fictional Rome City (clearly influenced by many of the worlds cities) where a twenty something guy investigates the mysterious disappearance of his father, aided by his father’s former Pokémon. However as a strange gas begins to send Pokémon crazy the guy teams up with a plucky wannabe reporter girl to discover what’s going on. 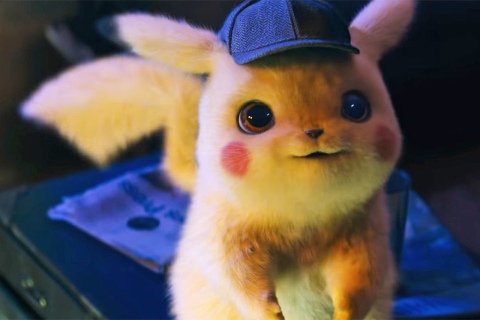 Yeah this wafer-thin, at times confused plot is mostly an excuse for Reynolds to deliver his brand of one-liner wise-crackery and also showcase the endless varieties of Pokémon. It fails to truly delve into what Pokémon is and its intricacies, so newcomers should instead take this as simply high fantasy science fiction. Justice Smith playing the main guy is only passable and next to Reynolds razor-sharp (if family friendly) line delivery … comes off poorly. Kathryn Newton as the sort-of love interest is pretty and reminiscent of the games and anime but generally not much better. Veteran actor Bill Nighy lends a bit of personality as the head of a corporation that may or may not be sinister, and the fact the movie only hints at the inclusion of Pokémon baddies Team Rocket feels like a missed opportunity.

The CGI for the creatures, the city and various sequences on the other hand, is top notch and brought everything to eye-catching life, and as a casual fan this still ticked many boxes for how I’d imagine this sort of movie to turn out. Good fun, but ultimately a bit forgettable.