I remember enjoying the first movie. Wreck It Ralph was a great idea, borrowing it must be said, from Pixar’s Monsters Inc yet not quite reaching the potential of its rather brilliant concept. However it delivered first-rate turns from John C Reilly as Donkey Kong inspired video game villain ‘Ralph’ and Sarah Silverman as cute kart racer girl ‘Venelope’. So yeah, I was keen to see what (mis)adventured this likeable duo would get up to next. This brings forth the arrival of wi-fi connectivity to the little arcade that’s home to Ralph, Venelope amongst others (including Pacman, various Street Fighter characters and several more recognisable faces), and after an over-zealous gamer breaks Venelope’s arcade machine steering wheel, a quest to get a new one (from eBay no doubt) is undertaken, with the world wide web ripe for exploration. 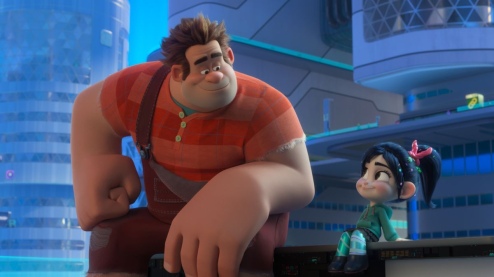 I found this built perfectly on the foundations set up in the first movie and delivered exactly what a sequel should … bigger and better. The animation is top-notch and I’ll go as far as to say its sone of the most lush, imaginative and personality-filled CGI I’ve ever witnessed. With the looming shadow of Pixar’s Toy Story 4, any hype for this seemed to get brushed under that carpet at time of release, which is a travesty as in many ways this is the superior movie. Ralph & Venelope are a great double-act and although the story is mostly focused on the plucky racer-girl’s journey of self discovery, Ralph still gets many of the best gags and a brilliant final act (hint…one Ralph is never enough!). The clever mickey-takes and references of the internet and especially of Disney themselves are also well-observed and often laugh out loud funny. The Disney Princesses scene is pure gold.

However the story isn’t exactly all that on paper, but its exploration of a developing friendship is poignantly observed none the less. Yet Disney’s obsession with forcing feminist propaganda into every movie these days raises its head again in the closing moments, but it’s at least more subtle than Avengers: Endgame. Tiny gripes aside though, this was great fun and one of the best animated movies of the year.