French director Gaspar Noe made ‘Irreversible’, arguably the most disturbing and unpleasant movie I’ve ever seen. So sitting down to this generally well-received drama, I was understandably cautious. Yet I’m also someone who likes to challenge one’s boundaries and I do have a love for French cinema. So thought I’d give this a go. 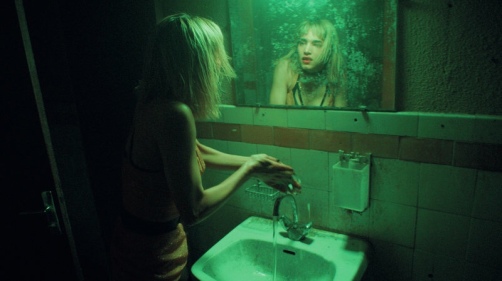 What story there is focuses on a group of free-spirited dancers who all seem part of a group who hang out and dance in a club that blasts rave music where they can feel free to let themselves go. Only thing is as the night progresses people start feeling ill and begin acting crazy as if their drinks have been spiked. I’ll admit it was at this stage I began to get interested as up until then this fairly plodding, about nothing in particular movie was doing nothing for me.

Gaspar Noe, his direction like an observer of the mayhem that unfolds, however ruins a potentially provocative, unhinged idea by lingering way too long on various moments. His long-takes whilst initially impressive in style quickly out stayed their welcome – a longer than necessary series of talking heads as the opening, various moments of chatter and banter that go on far too long, all culminating in contorting and convulsing bodies on a dance floor that’s like something out of a nightmare – which goes on and on and on. I get it, its a decent into drug-fuelled hell, and is performed convincingly but even with this it doesn’t go far enough to achieve much of anything. Noe’s-weak attempts to comment on birth, sex or death. just come off pretentious also.