I went into this with expectations dialled down mostly because I don’t consider the 1989 adaptation of Stephen King’s novel all that great. However, a remake is a chance to improve upon a concept so there’s every reason to hope this one fairs better. A doctor (Jason Clarke) and his family move to a rural town and soon befriend the kind old man across the road (John Lithgow) who eventually introduced them to the Pet Cemetery in the woods, located on the family’s land. However following an unfortunate incident involving the pet cat and a lorry, the old neighbour suggests burying the animal beyond the pet cemetery. So of course, the cat comes back and sets in motion a spiral of increasingly macabre events. 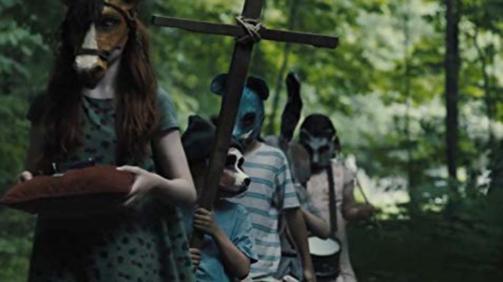 The movie quickly resorts to cliches like ‘we should never have moved here’ way before that sort of thinking seems reasonable. Also, John Lithgow surprisingly fails to have the screen presence of the originals Fred Gwyn with delivery for such iconic lines as ‘the soil of a man’s heart…’ and ‘sometimes dead is better’ coming off rather half-arsed. However Jason Clarke is decent aided by a memorable turn from Jeta Laurence as his daughter. Flashbacks to the wife’s memories of twisted-spine sister ‘Zelda’ is also cranked up in the freakiness and jump-scares department and really, turns out to be the movie’s most disturbing aspect. Also changes to the final act help explain-away some of the more ludicrous developments of the original, but also come off as even sillier somehow.

So this remake wasn’t terrible and at times genuinely scary, but like the original … I can’t help but feel that the concept is overall flawed.