I don’t watch as many animated movies as I should be, and realize I’ve missed out this year some big hitters.  However on browsing the latest rental releases, this took my interest as I recalled really enjoying the first movie.  This long time coming sequel pretty much picks up where we left off, with our super-hero family having to go about their crime fighting adventures in secret, with a law having been passed outlawing people with powers.  This brings in a wealthy brother and sister who propose to change things for the better by hiring Elastigirl (voiced by Holly Hunter) to showcase just how good super heroes are to the masses. 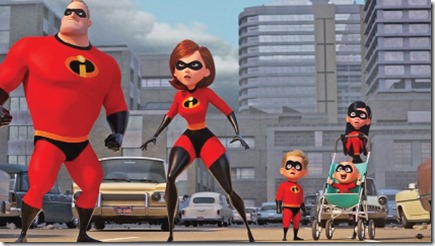 I’m a little bit sick of this concept of the public unsure of or shunning super heroes.  They almost becoming the enemy when there’s all too many actual enemies out there.  A similar plot device was used in Captain America Civil War and Batman V Superman.  Why does Hollywood think we want our heroes being portrayed with such distrust and fear?  Aren’t they meant to be the heroes?  Thankfully this admittedly very entertaining and visually arresting movie jumps between such plot threads and a twist on family responsibilities and throws in plenty of spectacular action.  The villain though is sign posted a bit too well and I guessed their identity easily.  Also there’s a clear feminist slant to the reversal of roles and some of the dialogue and themes, which yeah is everywhere right now.  As unnecessary as it clearly is in a movie that was never just about the male lead anyway.

The voice work is top notch though including a welcome turn from Breaking Bad’s Bob Odenkirk, and Pixar’s animation is as gorgeous as ever (even if the character design is a bit ugly … what’s with Elastigirl’s massive ass?).  Overall and considering the long wait for this, I was expecting a bit more … the villain is forgettable and cliched and the story adds nothing to the formula.  As it stands though, this is still a lot of fun regardless of wasted potential.

1 thought on “The Incredibles 2”