A Spanish supernatural horror hyped as being so scary it caused heart attacks and for viewers to switch it off. I’ve had my fingers burned by similarly worded hype campaigns before, as I recall actually being cautious to see The Blair Witch Project back in the day and well, that turned out to be a pile of shite. However this also had Paco Plaza attached as director, one half of the duo that delivered the excellent [REC] and its equally impressive sequel. 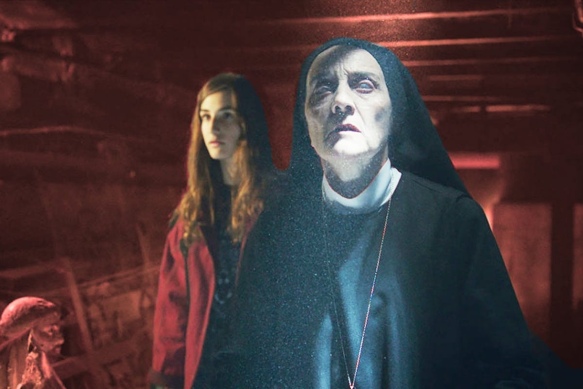 Veronica, a school girl who pretty much runs the house, looking after her younger siblings whilst their single mother works all hours, holds a seance involving a Ouija board along with two friends in a bid to contact her dead father. Predictably things don’t go to plan and soon theirs some sort of demonic entity out to claim the souls of her brother and sisters. So Veronica has to find out how to banish the demon and save the day.

Paco Plaza’s direction is moody and stylish with some clever camera work and decent gradual build up of dread. Set-pieces such as hands coming out of a bed or some ravenous kids are well done but an over-familiarity with the subject matter quickly creeps in and makes this pale in comparison to similar fair like Insidious or The Conjuring. It’s just not all that scary. The principle cast do their job but are all more serviceable than particularly memorable. Not essential then, but if you’ve exhausted most mainstream horror offerings, then there’s still entertainment to be had with this.