I think most of us knew that the sequel to the unexpected hit that was Deadpool, would be bigger and better,   A movie that was basically a one trick pony first time around, that of Ryan Reynolds’ wise-cracking, self-aware ‘merc with the mouth’ didn’t have a great deal more going for it as far as plot or an interesting villain.  So coming into this I was hoping for more.  Step up to the task Josh Brolin, fresh off his movie-stealing turn in the latest Avengers, he plays Terminator-like bad-guy ‘Cable’, sent from the future to kill some acting-out mutant kid who wants to blow up an orphanage and those that govern over him.  Deadpool see’s some injustice in the kids plight and offers to help, along with his band of reluctant friends he awkwardly names ‘X-Force’. 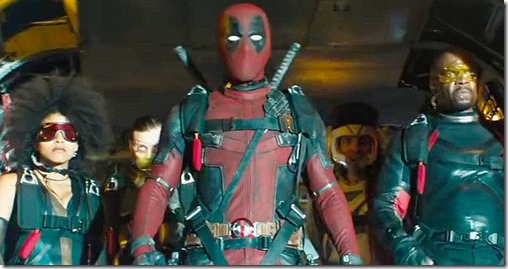 Reynolds is on brilliant form and his wealth of one liners, observations and fourth-wall breaking piss-takes are often hilarious.  Thankfully this time around he’s not the only pull this movie has, because Brolin is again brilliant and there’s also a few other colourful characters to keep things interesting (personal fave:  Domino).  Yet the child actor at the centre of the plot is somewhat lacking, has poor line-delivery and stands out compared to his more seasoned and entertaining co-stars.  Yet we do get a wealth of at times very violent, bloody action that is utterly unrestrained but skilfully executed, showing director David Leitch is an assured replacement for the original’s Tim Miller.

Some rather cheap-looking CGI doesn’t look all that much better than the first movie (especially Colossus) and not all the gags hit home runs.  However, this matters little when what’s presented is just so infectious.  I haven’t had as much at the cinema in a long time as I had watching this funny, exciting and crazy ride … which may play to the juvenile kid in all of us, but sometimes that’s exactly what’s needed.  Just go see it already.