Well I managed to pick up Sea of Thieves, the much anticipated Xbox One console exclusive from Microsoft and Rare.  Since it’s release last week the game has been getting some mixed reviews.  Whilst it’s vibrant graphics, sea-fairing and pirating mechanics have been praised, it’s rather simplistic fetch quest gameplay has not.

I have been away from my Xbox of late, preferring the wealth of enjoyment I’ve been getting from my Nintendo Switch, and apart from the occasional dip in and dip out of Destiny 2 on Microsoft’s console, I’ve barely touched the machine.  So I saw Sea of Thieves as a way to get me back on what was once my preferred platform of choice.  My experience with the game thus far has been mixed … like many.  First impressions were not great, as I was thrown into a game on board a galleon with several other players and hadn’t a clue what I was doing.  Suffice to say my not-so-welcoming-crew mates put me in the on-board jail and well, I couldn’t do much other than quit out.  After that I tried out the single player, which with no story and no tutorial was pretty much an experimentation, trying to learn the ropes etc.  Not often does a game tell you NOTHING until you figure it out yourself.  I have for the most part been enjoying the single player however; doing activities at my own pace, setting off on voyages, reading maps, digging up treasure, returning to an outpost – and then having another ship attack me and steal all my treasure.  Bastards. 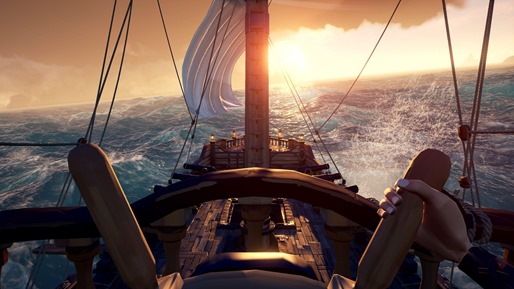 However it’s the atmosphere that is unique to me and also thrilling.  Setting sail and looking out for other players so not to get spotted.  Battling the ocean waves then finding my destination, dropping anchor and swimming ashore to take down skeletons of long dead pirates in the hope of finding some loot.  It’s an experience I don’t think I’ve ever had in a game and it keeps pulling me back, be it alone or as part of a crew.  The game also has real visual charm to it as well as simply stunning water effects and realistic weather.

Having played as part of a crew, communicating to each other via headsets, watching each other’s backs and steering the ship – it’s clear this game excels when played with friends.  However Rare have nailed the feel so well that it’s not unappealing to either set out alone or on a ship full of strangers (as long as they are welcoming).  Some of the gameplay could be built upon and Rare are promising improvements and additions in time to come, so hopefully this will be a game that evolves.  For now, although a little simplistic, Sea of Thieves offers up an experience quite like nothing else available.

If you have Xbox Game Pass or are looking for something different, I say give it a go.