I had heard a lot of good things about this and confess to really enjoying the Thor character and the lore surrounding him, even if I like many was underwhelmed by the last solo Thor outing, Dark World.  In this third instalment, sandwiched somewhere between Avengers: Age of Ultron and the forthcoming Avengers: Infinity War, Thor (Chris Hemsworth) is captured by a demonic being who is said to bring about Ragnarok, the end of days for Thor’s home world of Asgard.  However he sets about preventing this only to return home and find step-brother Loki up to his old tricks again, this time impersonating their father Odin (Anthony Hopkins).  However a turn of events brings another family member out of exile in the shape of Hella (Cate Blanchett) who vows to claim her rightful place on the thrown of Asgard even if it means killing everyone who stands in her way. 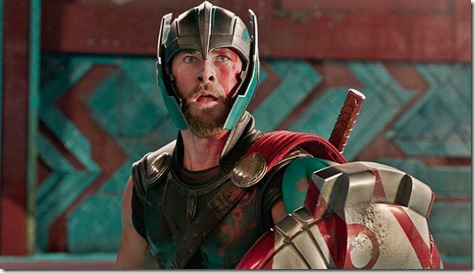 It would be easy for me to yawn at this plot, it being yet another Marvel disgraced family member coming out of the woodwork and vowing revenge against those that shunned him (or her).  It was done in the previous Thor movies and also (spoiler!) Black Panther, that it’s now getting very tired.  Thankfully then that isn’t the entire focus of this movie.  Oh no, firstly the dialogue is particularly sharp, with very funny banter from various characters, especially a wonderful, awkward buddy set up between Thor and Hulk (Mark Ruffalo).  Add to this great support from Jeff Goldblum as the other-worldly ‘grand master’, several quirky side characters (the hilarious rock dude) and of course a still brilliant Tom Hilddleston as Loki – and this was just great entertainment throughout.  The movie treads a careful balancing act between all out comedic farce and straight up action adventure, but somehow manages it, and even if Cate Blanchett’s villain is a walking cliché, the actress usual screen presence and charisma stands out and has such a cool design, familiarity can be forgiven in this instance.

It’s often better when these kinds of movies don’t take themselves too seriously, whilst still managing to deliver great action, memorable characters and gob-smacking spectacle.  This is one such example. Highly recommended.