I seem to be doing a Stephen King season lately with my viewing, and with this fondly remembered entry from 1989 I was very excited to check it out again.  It tells the tale of a family who move into a house located near a busy main road where truckers drive seemingly with no awareness of their surroundings.  A kindly, elderly neighbour (the late Fred Gwynne) befriends the family and soon tells them about the aforementioned Pet Cemetery, a place where for decades children have gone to bury their pets.  However something sinister lies beyond the cemetery, that of a sacred Indian burial ground – and we all know they’re never good places. 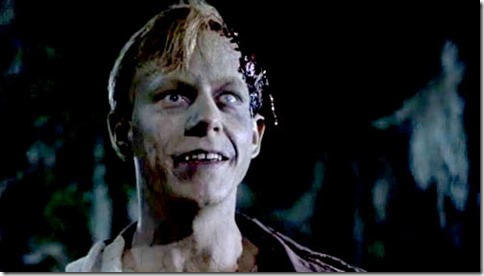 I was surprised how well I remembered this adaptation and it certainly has a slightly goofy charm along with it’s intriguing concept.  Acting is serviceable and a little cheesy in places (especially Fred Gwynne not that far removed from his turn as Herman Munster in The Munsters TV series).  Yet it certainly has it’s moments; the child actors especially stealing the show, with the stand out being toddler Gage who turns rather iconic in later scenes.  Also it’s got effectively freaky flashbacks / dream sequences that send shivers (creepy sister ‘zelda’) and a few solid set pieces with effective gore.  Yet the movie didn’t entirely get under my skin, not helped by questionable motivations of certain characters (despite warnings and shit-going-down) which ruins the movie’s second half.  Yet for one of those 80s horrors that has for some reason always stayed in my mind … I still had fun with this.

The Blu-ray, part of a ‘premium collection’ boasts a very detailed and vibrant picture that I wasn’t expecting.  Sound is delivered in the original 2.0 stereo or a very effective and immersive 5.1 DTS HD Master Audio (just hear those trucks shake the room).  Extras aren’t exactly plentiful but we do get a commentary from director Mary Lambert as well as welcome featurettes on the making of as well as Stephen King himself.  The set also boasts a nice slip case and art cards.