This was one of those movies I kept hearing about, so I thought I’d finally get around to watching it.  This tells the simple story of freelance video guy Aaron (Patrick Kack-Brice) who accepts a job to film a mysterious guy, sort of a day-in-the-life type thing.  Problem is, Joseph (Mark Duplass)  is a bit strange. 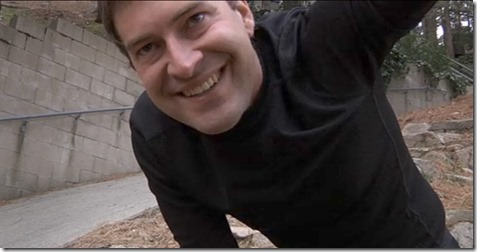 The first half hour I must admit I was constantly thinking ‘what the f*** am I watching?’ and was tempted to switch it off.  However as the day progresses, and it dawns on the guy filming, that Joseph isn’t entirely the full shilling, the movie began to get a bit unnerving … leading to a very strong third act and an effective, if predictable ending.

I was only vaguely  taken with this.  It’s hard to sympathise with Aaron all that much considering how from the off dodgy Joseph comes across (film him taking a bath?).  Also, Joseph was simply annoying (those jump scares!) and mostly insufferable, meaning I’d have made an excuse to leave well before Aaron actually does.  However, the concept has a great deal of potential and like most ‘found footage’ type horrors it did get under my skin with the ‘feeling like I’m there’ vibe such movies can create.  So I may still check out the sequel