In the nineties I remember really loving this movie and watched it on a rental double bill with Stephen King adaptation The Dark Half (I really need to see that again also).  So when I heard this was finally getting not just a Blu-ray release but was also digitally re-mastered and fully restored with a plethora of extras – I couldn’t resist.  Telling a sort-of Romeo & Juliet story of a young teenage kid who’s trashy girlfriend is killed following a motorcycle accident. Said kid then decides to bring girlfriend back to life using his father’s shady military experiments on the recently deceased via a mysterious chemical known as Trioxin. 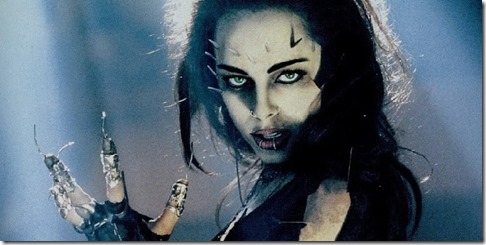 The poster art of this movie was instantly iconic, what with sexy star Melinda Clarke posing as some sort of sadomasochistic zombie hottie.  It may not be all that clever and is mostly low budget fair but for some impressive practical effects work that still look good to this day (bar occasional dodgy puppetry zombie action).  Clark’s performance, although nothing all that layered is head and shoulders above the rest of the cast, really bringing home the pain and suffering of her undead cravings whilst resorting to inflicting pain on herself to stop from eating her boyfriend (!).  It’s a fun concept and an entertaining ride, with director Brian Yuzna (Bride of Re-Animator, Society) pulling out all the tricks to deliver lots of gory fun.

I suppose with many gorier, nastier movies since, this one’s impact has been considerably diluted and is much more pop-corn schlock than ‘full on horror’.  Also, the idea of Clark’s Julie fighting her desires to eat brains isn’t as explored as it should have been, with her gradual transformation particularly rushed.  Yet this has it where it counts; great practical effects, lots of blood & gore and plenty of energy, which might not make it the classic I remember it as – but still left me grinning like the twenty something former me.

The Blu-ray from Lionsgate as part of their Vestron Video Collector’s Series is impressive stuff.  The soundtrack may only be in the original 2.0 stereo but has clear dialogue and plenty of atmosphere.  For a mostly low-budget movie where clearly all the money was spent on the make up effects, the movie has some nice detail, retains clarity and depth despite mostly night-set scenes and facial detail is decent.  Add to this extras that consist of two worthwhile commentaries, interviews and stills galleries.  Great treatment for what may be a cult favourite but doesn’t get talked about all that much..